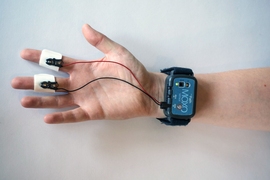 ↓ Download Image
Caption: mPath's MOXO sensor, used primarily for market research, is a wearable that resembles a bulky smartwatch. Placed on the wrist, it wirelessly measures changes in skin conductance (subtle electrical changes across the skin), which reflect sympathetic nervous system activity and physiological arousal. Spikes in conductance can signal stress and frustration, while dips may indicate disinterest or boredom.
Credits: Courtesy of mPath 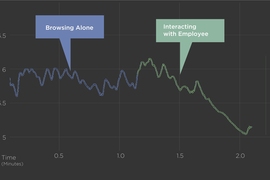 ↓ Download Image
Caption: The skin conductance measurements of a shopper in a retail store indicate that the shopper's engagement spiked while trying out interactive electronics, but dipped dramatically when an employee came over to deliver a so-called “sales pitch.”
Credits: Courtesy of mPath

Caption:
mPath's MOXO sensor, used primarily for market research, is a wearable that resembles a bulky smartwatch. Placed on the wrist, it wirelessly measures changes in skin conductance (subtle electrical changes across the skin), which reflect sympathetic nervous system activity and physiological arousal. Spikes in conductance can signal stress and frustration, while dips may indicate disinterest or boredom.
Credits:
Courtesy of mPath

Caption:
The skin conductance measurements of a shopper in a retail store indicate that the shopper's engagement spiked while trying out interactive electronics, but dipped dramatically when an employee came over to deliver a so-called “sales pitch.”
Credits:
Courtesy of mPath

Humans experience a range of emotions in response to products and experiences on a daily basis. Shoppers may get excited for certain brands and then overwhelmed by choices. Audience members may oscillate between apathy and engagement during performances. Children can become frustrated, bored, or entertained while learning a new subject.

Using wearable stress sensors, analytics, and other technologies, MIT Media Lab spinout mPath is able to pinpoint the exact moment consumers feel these subconscious responses. In doing so, the startup has brought some interesting market research insights to major companies and organizations to help them refine their products and services.

“Right now, companies struggle to understand their customers’ emotional needs or wants,” says founder and CEO Elliot Hedman PhD ’12. “But if we listen a little to consumer emotions, there’s a lot of room for innovation.”

Headquartered in Denver, Colorado, mPath has worked with big-name clients including The LEGO Group, Google, The Blue Man Group, Lowe’s, Hasbro, and Best Buy, as well as governmental organizations, film production companies, and hospitals. Now mPath is dipping into childhood education, having just launched a project with the Boys and Girls Clubs in Denver to discover ways to encourage children to read more.

Getting the whole story with “emototyping”

The startup’s MOXO sensor — whose core technology was co-invented by Hedman, MIT Professor Rosalind Picard, and other MIT researchers — is a wearable that resembles a bulky smartwatch. Placed on the wrist, it wirelessly measures changes in skin conductance (subtle electrical changes across the skin), which reflect sympathetic nervous system activity and physiological arousal. Spikes in conductance can signal stress and frustration, while dips may indicate disinterest or boredom.

To gain an accurate picture of consumers’ responses to specific stimuli, mPath developed a new approach to market research, called “emototyping.” This process combines the stress sensors with eye-tracking glasses or GoPro cameras, to identify where a person looked at the exact moment of an emotional spike or dip. Personal interviews are also conducted with all participants, who are shown the data and asked what they think they felt.

This entire process creates a more in-depth, precise emotional profile of consumers than traditional market research, which primarily involves interviews and occasionally video analysis, according to Hedman. “All these things combined together in emototyping tell us a deep story about the participant,” he says.

Emototyping is an especially useful tool when studying children’s experiences, according to Hedman. “It’s hard for kids to describe what they felt,” he says. “The sensors help tell the whole story.”

Insights from tooth-brushing, to retail, to reading

Over the years, the startup has tackled an eclectic mix of projects. A study with the New World Symphony found that making songs shorter and performing classical compositions of modern pop music help engage new audiences in classical music. Studying movies such as “The Departed” revealed where some techniques or concepts (such as dark humor) can be implemented in films to keep audiences engaged. At one point, the startup even tracked patrons’ fear throughout parts of a haunted house.

For the study, mPath researchers drove to people’s homes to equip them with the MOXO sensor and a GoPro camera. At times, they measured few to no skin-conductance spikes in the data, indicating the brushers were bored; at other times, little spikes in the data indicated the brushers were inconvenienced. After analysis and interviews, mPath concluded that people are looking for a more engaging brushing experience. The toothpaste company is developing products around that idea.

More common are retail-store studies. In studying customers in electronics stores, mPath found that engagement spiked while they were trying out interactive electronics, but dipped dramatically when an employee came over to deliver a so-called “sales pitch.” Results like this indicate that retail stores must better train employees to interact with customers and create displays that better encourage deep interaction, “which is a big space where retail needs to develop,” Hedman says.

Now at the Boys and Girls Club, mPath has uncovered methods to encourage reading. Hedman gives an example of a young girl who appeared to be reading a book, but the eye-tracking glasses caught her focus shifting to a poster on the wall, which she read instead. “Our theory is that an entire paragraph can look overwhelming, so we’re developed some ways to make text look more like a poster — something easy to read if they’re trying to learn,” he says.

In another instance, mPath countered a commonly held idea that letting children play a brief video game as “dessert” after reading works well. But mPath’s data found that when children play a brief game before reading, the sensors pick up more spikes in engagement. “We found if children start with dessert, they’re more excited during reading,” Hedman says.

From therapy to industry

With its renewed focus on children’s learning, the sensor has, in a way, come full circle: The MOXO sensor’s core technology began as tool for studying stress levels of children with autism. (A version was later developed into the Embrace wristband that can detect and alert to convulsive seizures, commercialized through Picard’s startup Empatica.)

While at MIT, Hedman tested the sensor on children with autism enrolled in occupational therapy. One boy was climbing a rock wall and looked calm, but his stress spikes registered off the charts. “I thought, ‘The sensor has to be broken. There’s no way that kid is scared,’” Hedman says.

Coming off the wall, the boy told the teacher he was bored, but the sensor data indicated otherwise. That’s when the teacher had “a light-bulb moment,” Hedman says: The boy said he was bored to compensate for being overwhelmed. “That was a really powerful moment for me. I knew there is so much we can do if we understand emotions better,” Hedman says.

Therapy applications seemed promising. But companies began courting Hedman with appealing market-research questions. First came Hasbro, which wanted to find out how immigrants to the United States can learn how to play common American board games, such as Monopoly. Then came LEGO asking to track the emotions of adults and children at play — which pushed Hedman toward industry.

In the LEGO study, Hedman found that children became most stressed when making mistakes they need to go back a few steps to rectify. It also revealed the children were far less stressed with parents nearby. But if parents helped build too much, the children get too bored. Based on those results, LEGO implemented solutions into its digital products.

“I was like, ‘Cool, we just helped a company.’ That kind of shifted me from theory to impacting organizations,” Hedman says.

Hedman founded mPath in 2012, while still at MIT. But the sensors were only half the innovation. Hedman needed to develop “a bizarre set of skills,” he says, to develop emototyping. At MIT, he took classes on ethnography and creating research environments. He took psychophysiology classes at Boston College and Northwestern University, and education classes at Harvard University. “A large community of people from all over the place guided me,” he says, “but MIT opened up those doors.”