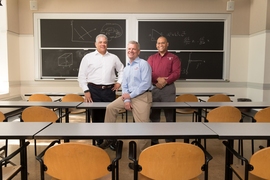 “Force is a part of our everyday experience,” said Michael McDonald, assistant professor of physics in MIT’s Kavli Institute for Astrophysics and Space Research. “Gravity. Friction. What are some other forces?”

The students in his Tuesday morning lecture on Newtonian mechanics were quick with suggestions: “Tension.” “Pressure.” “Torsion.”

While the class was focused on the fundamentals of projectile motion and classical physics, the participants could claim more than the average student’s level of experience with pressure and tension. All 15 eager note-takers were veterans of the United States military, on day three of a weeklong “boot camp” on STEM subjects hosted by MIT last week.

The 15 vets were participants in the Warrior-Scholar Project, a nonprofit that organizes one- and two-week-long intensive programs to help members of the military transition from active duty to academia. After a week studying humanities at Harvard University, the students spent July 30 to Aug. 5 immersed in all things STEM at MIT. With daily lectures on physics, independent research projects, afternoon tours of labs on campus, nightly reading, and problem sets due each morning, their days were packed from 9 a.m. until 11 p.m.

“It’s a lot of information, and I’m trying to sponge it up as best I can,” Kyle Skattum, a former Marine Corps infantryman, told MIT News. “It’s been really awesome. Being engulfed into the culture on a college campus has been huge. But it’s almost a semester’s worth of material compressed into a week. The ‘boot camp’ comparison works.”

Since 2012, the WSP has run these intensive courses, which are free of charge, on 15 different university campuses, but this year’s session was the first at MIT. The students stayed on MIT’s campus for both weeks. Each day of the STEM week included a visit to a different MIT lab focused on topics such as gravitational waves, medical imaging, astronomy, and engineering systems for the soldier of the future. After exploring force, mass, and acceleration in McDonald’s Tuesday lecture, the vets took a tour of the laboratory of the Institute for Soldier Nanotechnologies, a collaboration among MIT, the Army, and industry groups, to research and develop novel systems to protect soldiers in the field.

The goal of the project, says Dan LaFlamme, a WSP fellow helping to coordinate the program, is to both demystify college science and help veterans build the confidence they need to succeed in a demanding academic degree program.

“The hope is that by the end of this week they say to themselves, ‘I can do mathematics and physics. I can engage with this material that’s very mysterious,’” he says.

LaFlamme participated in the WSP program in 2013 after leaving the Air Force, where he served as an aerial gunner. Today, he is nearing completion of a degree in mathematics at Rutgers University.

“When I was coming out of the military, I was severely underconfident in myself” with regard to college academics, he recalls. “The WSP gave me the tools I needed to be successful.”

Nelson Olivier, a former postdoc in the lab of Class of 1922 Professor of Biology and professor of chemistry Barbara Imperiali and now a student in the MIT Sloan School of Management’s executive MBA program, helped bring the Warrior-Scholar Project to MIT along with Bill Kindred, a fellow veteran and EMBA classmate, and human resources manager at MIT’s Lincoln Laboratory. A long-serving former Navy intelligence officer, Olivier experienced firsthand the unique social and cultural challenges during transition from military service to postsecondary education.

“Even with all the background and training and experience you get in the military, it can be an ice-water bath when you step in to the civilian world and you need to translate these other skills you have,” Olivier says. “The WSP program helps veterans learn, or relearn, how to be students. From minute one, it’s teaching problem-solving.”

Skattum served in the Marines for four years, including stints in the Philippines, Japan, and South Korea. A chance encounter with a WSP alum while taking a military EMT course led him to apply for this summer’s course at Harvard and MIT. He’s planning to study fermentation science at Colorado State University, starting this coming semester, and hopes to one day become a master brewer.

Sitting in class in Building 5, he took careful notes as McDonald went on to explain Newton’s laws of motion. The professor noted that what they were covering was the cornerstone of MIT’s first-year physics course: “The vast majority of human experience is in this realm governed by Newtonian mechanics, and that’s a worthwhile thing to understand.” Along the way, McDonald observed that, while in centuries past the study of projectile motion was motivated by a desire to better understand the trajectories of bullets and shells — a subject with which his students had some expertise — the field today is primarily driven by space exploration, his own field of expertise.

“I would say 90 percent of the people here are going into a STEM degree,” Skattum said afterward. “No one will become an expert in physics in one week, but the goal of the program is to familiarize us with these equations and terms, so when I see them in the future they won’t be so foreign.”

He praised the course’s focus on group problem-solving during the nightly physics problem-set sessions. “It’s a big thing, getting to work in groups, because nowadays in science you’re not going to work by yourself.”

In addition to their deep experience with working in teams in a high-pressure environment, LaFlamme says vets such as Skattum have another asset that’s very useful in the pursuit of a degree. “They have a built-in skill coming into this course, that they often don’t realize they have: They don’t give up. We are relying on that. They are not going to quit and say, ‘I can’t do this.’ And they don’t. That has never happened.”

MIT itself makes a concerted effort to attract and support students who have served in the military. There are currently five undergraduate veterans enrolled at the Institute and six more will arrive this semester, according to Emily Sheldon, senior assistant director of admissions. Approximately 125 graduate students will be enrolled in the fall as well.

Sheldon leads initiatives to recruit veterans to apply to MIT, which partners with organizations such as Service to School VetLink, a mentorship program for veterans looking to transfer to selective four-year institutions, and the Leadership Scholar Program, which assists Marines with the transition to four-year universities. Her efforts have also helped lead to a fivefold increase in the number of MIT Reserve Officers’ Training Corps (ROTC) students. She says that conversations are building across MIT on ways to better support veterans on campus.

McDonald says the week’s schedule was designed to elicit feedback to improve future iterations of the course. “We don’t want to be ‘one-and-done,'” he says. “We’re learning lessons about what works, to hopefully repeat this here at MIT next year, and for running the STEM course on other campuses.”

Reporting for Boston 25, Bob Dumas highlights the Warrior-Scholar Project, which introduces soldiers to universities such as MIT in an effort to help them transition back to civilian life. “We want to take our enlisted veterans, many of them first-generation college students, and expose what life would be like for them at a top-tier school,” explains the project’s executive director.

Investigating the dynamics of war and peace

After MIT, new officers will serve their country