Investigating the dynamics of war and peace 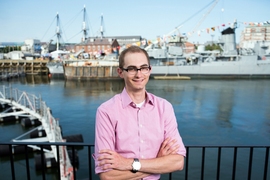 Before coming to MIT to pursue a PhD in security studies, Erik Sand served for eight years of active duty in the U.S. Navy as a surface warfare officer. His experiences during this time were memorable, to say the least.

Sand and his fellow servicemen helped rescue a fishing boat off the shore of South Korea and traveled to Australia for the 100th anniversary of the Great White Fleet. He had a part in escorting Neil Armstrong’s family for the famed astronaut’s burial out at sea, and he even attended the coronation luncheon of the King of Tonga.

Along with the adventures came significant responsibility and hard work. At his various posts Sand was responsible for the safety and well-being of large numbers of sailors and for maintaining weapons, ordnance, and even a nuclear reactor aboard the ships where he was stationed. He spent his last three years of duty in Washington working as an admiral’s aide and then in the Pentagon for the Secretary of the Navy Advisory Panel.

Throughout Sand’s service in the Navy, questions and ideas were sprouting in his mind about international relations, grand strategy, deterrence, escalation control, and maritime issues. Now a third-year doctoral student in MIT’s Department of Political Science, he is still in the process of solidifying a dissertation topic, but it will likely fall into one or more of these areas.

One possible topic he is considering is based on his second-year paper on economic interdependence and isolation in wartime, and how these conditions affect states’ strategies and the outcomes of war. Sand is also interested in why the world’s great powers, such as the U.S., China, and Russia, rarely fight directly in smaller, limited wars, and what explains the cases when they do, such as the Korean War.

“Understanding how these dynamics around war and peace work is imperative. If countries know how a war will turn out, we’re less likely to fight in the first place,” Sand says. “I think it’s really important that academic research gets done with international relations in mind, with an eye toward helping policymakers and scholars interact to seek better policy outcomes.”

“The best of what we want our country to be”

Before beginning his PhD studies, Sand studied history as a undergraduate at Harvard University. He was also a part of the naval Reserve Officers’ Training Corps (ROTC). However, since Harvard did not have an ROTC, Sand went down the street to MIT where the program was based. When he graduated, Sand began his active duty commitment with the Navy as a surface warfare officer. For two years, he oversaw up to 30 sailors aboard USS John S. McCain, a destroyer based out of Japan. He was also the gunnery officer, which meant he was in charge of maintaining all of the weapons and ordnance on board.

“That’s the stuff that explodes,” he says. “It’s a lot less glorious than it sounds.”

Perhaps more glorious were Sand’s duties as a bridge watchstander, which involved navigating the destroyer as a direct representative of the captain when the captain wasn’t at the helm.

After a year of training, Sand spent his fourth and fifth years in active duty as a nuclear reactor controls division officer aboard USS Abraham Lincoln, an aircraft carrier based north of Seattle. During this time he was in charge of 50 sailors and the nuclear reactors that powered the ship.

Sand eventually qualified to be engineering officer of the watch for the entire aircraft carrier, and was second in charge of a group of divisions that totaled 130 sailors.

“The Navy is an organization that I think most of the time embodies the best of what we want our country to be,” Sand says. “I never worked or lived in any other place that was as diverse. It’s a place where you are ultimately judged by your ability to do your job. You are all part of a team, and if you didn’t have that team, you wouldn’t be able to do your job. There is sort of this mutual interdependence and desire to get things done when they need to be.”

Caring for others in distress

At MIT, Sand participates in iREFS (Institute Resources for Easing Friction and Stress), a program run by graduate students that trains volunteer students to provide their peers with support, coaching, and listening services, and to point them to the right resources during times of personal uncertainty, stress, or conflict. Sand is a facilitator in MIT’s Notice and Respond workshops, which help students learn to spot when someone else is struggling and to respond with the appropriate help.

“My interest in this grew out of my time in the Navy. I had several sailors who had mental health issues and I always felt, as a division officer, that you’re responsible for your sailors,” Sand says. “A lot of the time you are the first person they come to and I always wanted to train as a mental health first-responder because I thought this would be very valuable.”

During his time in the Navy, sailors would confide in Sand and turn to him for guidance. Although there we no traumatic events during his tour of duty, several sailors wrestled with mental health problems, and some of them had to leave the ship.

“There wasn’t one defining event, but it was something that came up time and again that I had to deal with, and I wished I was better equipped,” he recalls.

The summer before coming to MIT, Sand worked as a park ranger in Alaska, where from his office window he could see humpback whales breaching under blue skies, and landscapes of forest greens and snow-capped mountains.

When he wasn’t processing permit applications and talking to park visitors about rules, Sand’s life on Glacier Bay’s 3.3 million-acre national park was filled mostly with patrols in the backcountry, kayak trips, and enjoying the scenery.

For Sand, it was an ideal break from the Navy and office life. He has always loved to hike and camp, and was a Boy Scout as a child, later becoming an Eagle Scout.

It could be said that his interest in security studies and his desire to acquire a PhD also began at a young age.

“My mother has this story about how I asked about the quality of a history PhD at her alma mater, which didn’t offer PhDs, but I didn’t know that as a 6-year-old,” he says. “I was particularly interested in the period between the American Revolution and the Civil War.”

He also recalls that as a kindergartner on weekly library trips, “pretty quickly I was asking where the science and history books were. There was this one book that I remember constantly checking out about Revolutionary War times, that I would bring home and demand that my mother read to me.”

After MIT, new officers will serve their country

Vipin Narang: On the brinkmanship beat