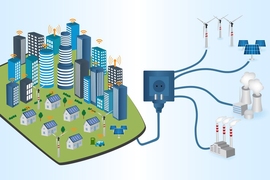 ↓ Download Image
Caption: Coordinating smart appliances and electric cars may help balance supply and demand in the power grid, according to a new study.

Caption:
Coordinating smart appliances and electric cars may help balance supply and demand in the power grid, according to a new study.

Power producers usually keep turbines spinning at a few offline plants, so they can ramp up production if demand spikes. Or they maintain coal-fueled backup generators that can be fired up quickly. But these approaches are either costly, polluting, or both.

In theory, the grid could employ a battery to keep supply and demand in balance, but existing battery technologies offer no cost savings over power production. In a new paper, however, MIT researchers argue that “smart appliances” in homes and offices, such as thermostats that can be adjusted remotely and electric cars that plug into the grid, could, collectively, act as a massive battery, offering a lower-cost, lower-emission alternative to backup power generation in the grid.

Getting power producers to trust that virtual battery, however, requires rigorously quantifying its capacity and charge and discharge rates. In the paper, the researchers take some initial steps in that direction.

“We have a lot of these flexible [electrical] loads, but they’re small, diverse, and scattered all over the place,” says Daria Madjidian, a postdoc in MIT’s Laboratory for Information and Decision Systems (LIDS). “At the moment, they’re not a well-understood resource. The question is, can we develop algorithms that schedule consumption of these loads in such a way that satisfies all their constraints and makes them appear to the power system as a battery, which can store a certain amount of energy and absorb and release it at a certain rate?”

Madjidian and two of his LIDS colleagues — Mardavij Roozbehani, a principal research scientist; and Munther Dahleh, the William Coolidge Professor of Electrical Engineering and Computer Science and director of MIT’s Institute for Data, Systems, and Society — presented their preliminary answer to that question at the Institute of Electrical and Electronics Engineers’ Conference on Decision and Control.

In treating a collection of flexible electrical loads as a single battery, the researchers identified a fundamental tradeoff between the battery’s capacity and the rates at which it can charge and discharge.

That tradeoff, however, can be renegotiated on a daily or even hourly basis. If, one day, a power provider expects strong but erratic winds, it might want to privilege quick charging, in order to capture the output of its wind turbines. If, on another day, it expects almost all of its customers to begin turning on their home air conditioners in the evening, it might want to privilege capacity, in order to handle a surge of demand.

“Conventional batteries can’t do this, but these guys can,” Madjidian says, referring to devices with flexible charge rates. “They open a path to designing control policies that tailor their specifications for particular purposes.”

To get a sense of how a collection of loads can act as a battery, consider a smart thermostat in a large office building. For any given temperature setting, the building’s inhabitants can probably tolerate a swing of a half-degree in either direction without discomfort. Toggling the thermostat a half-degree so that the building’s temperature-control system consumes more energy is the equivalent of charging the virtual battery. Toggling it the opposite direction so that the system consumes less energy equates to releasing the battery’s charge into the grid.

Similarly, an electric car parked in an office building needs to recharge its battery, but the charge rate can be fast or slow, and the charging might take place at any time within, say, a four-hour window. Slowing the charging rates or deferring the charge times for a group of cars reduces demand on the grid (equivalent to a release of energy from the grid battery). The charge rate of this virtual battery is limited by the available capacity of the cars’ own batteries and by their individual maximum charge rates.

The LIDS researchers first developed a very simple model of a grid with flexible loads, in which the loads were all the same size and came online — the equivalent of electric cars’ being plugged in — at regular intervals. That model suggested the tradeoff between the capacity of the virtual battery and its charge and discharge rates. But in investigating the reasons for that tradeoff, the researchers identified a fundamental principle they believe will hold for almost any collection of flexible loads.

To see how charge rates trade off against battery capacity, suppose that both of the real batteries are empty. To maximize the charge rate of the virtual battery, you need to use both real batteries; any two batteries can absorb charge faster than either of them can in isolation. But the faster-charging real battery will fill up before the slower-charging one does.

In the paper, the LIDS researchers were able to characterize this set of tradeoffs for their simple model. In ongoing work, they are developing more realistic models, in which both the size and the timing of the loads varies.

“We need more power-system flexibility as renewable-generation penetration grows,” says Duncan Callaway, an associate professor of energy and resources at the University of California at Berkeley. “Using electricity demand from EVs [electric vehicles] and HVAC [heating, ventilation, and air conditioning] as a ‘virtual battery’ is a very interesting conceptual jump that many researchers are thinking about. Madjidian et al build on the work of other researchers to provide some new insight into how to quantify the size of these virtual batteries. Their contribution is to bring new types of electricity loads into the space of things we can quantify as virtual batteries.”

How wise are crowds?