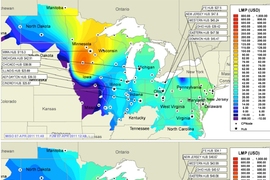 ↓ Download Image
Caption: A 'heat map' depicting the rates charged by electricity producers on the Eastern seaboard and across the Midwest — in which colors at the red end of the spectrum represent high prices and colors at the blue end low prices — demonstrates how drastically the wholesale-energy market can change in as little as five minutes
Credits: Image courtesy of Mardavij Roozbehani 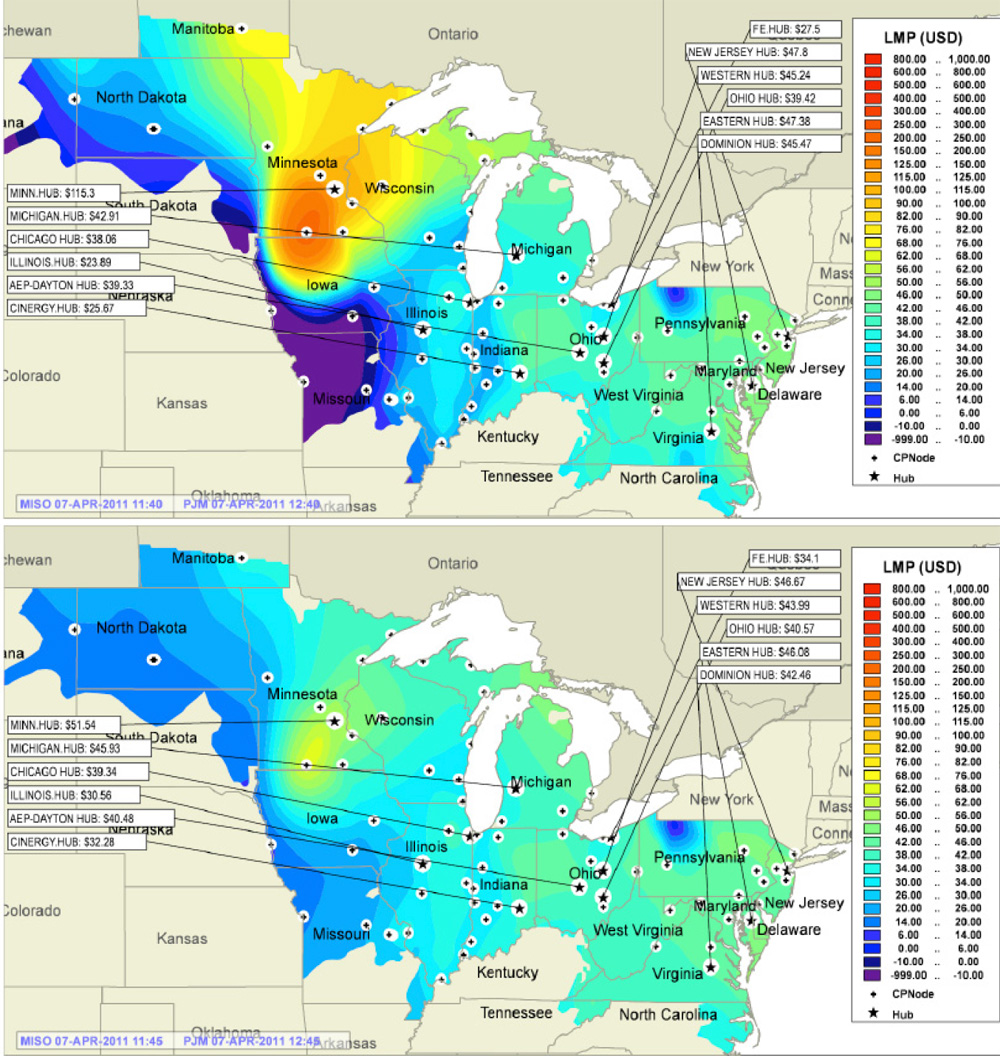 A 'heat map' depicting the rates charged by electricity producers on the Eastern seaboard and across the Midwest — in which colors at the red end of the spectrum represent high prices and colors at the blue end low prices — demonstrates how drastically the wholesale-energy market can change in as little as five minutes. | Enlarge image
Image courtesy of Mardavij Roozbehani
In the last few years, electrical utilities have begun equipping their customers’ homes with new meters that have Internet connections and increased computational capacity. One envisioned application of these “smart meters” is to give customers real-time information about fluctuations in the price of electricity, which might encourage them to defer some energy-intensive tasks until supply is high or demand is low. Less of the energy produced from erratic renewable sources such as wind and solar would thus be wasted, and utilities would less frequently fire up backup generators, which are not only more expensive to operate but tend to be more polluting, too.

Recent work by researchers in MIT’s Laboratory for Information and Decision Systems, however, shows that this policy could backfire. If too many people set appliances to turn on, or devices to recharge, when the price of electricity crosses the same threshold, it could cause a huge spike in demand; in the worst case, that could bring down the power grid. Fortunately, in a paper presented at the last IEEE Conference on Decision and Control, the researchers also show that some relatively simple types of price controls could prevent huge swings in demand. But that stability would come at the cost of some of the efficiencies that real-time pricing is intended to provide.

Today, customers receive monthly electrical bills that indicate the cost of electricity as a three- to six-month average. In fact, however, the price that power producers charge utilities fluctuates every five minutes or so, according to market conditions. The electrical system is thus what control theorists call an open loop: Price varies according to demand, but demand doesn’t vary according to price. Smart meters could close that loop, drastically changing the dynamics of the system.

Research scientist Mardavij Roozbehani and professors Sanjoy Mitter and Munther Dahleh assumed that every consumer has a “utility function” describing how inconvenient it is for him or her to defer electricity usage. While that function will vary from person to person, individual utility functions can be pooled into a single collective function for an entire population. The researchers assumed that on average, consumers will seek to maximize the difference between the utility function and the cost of electricity: That is, they’ll try to get as much convenience for as little money as possible.

What they found was that if consumer response to price fluctuation is large enough to significantly alter patterns of energy use — and if it’s not, there’s no point in installing smart meters — then price variations well within the normal range can cause dangerous oscillations in demand. “For the system to work, supply and demand must match almost perfectly at each instant of time,” Roozbehani says. “The generators have what are called ramp constraints: They cannot ramp up their production arbitrarily fast, and they cannot ramp it down arbitrarily fast. If these oscillations become very wild, they’ll have a hard time keeping track of the demand. And that’s bad for everyone.”

The researchers’ model, however, also indicates that at least partially shielding consumers from the volatility of the market could tame those oscillations. For instance, Roozbehani explains, utilities could give consumers price updates every hour or so, instead of every five minutes. Or, he says, “if the prices in the wholesale market are varying very widely, I pass the consumer a price that reflects the wholesale market conditions but not to that extent. If the prices in the wholesale market just doubled, I don’t give the consumer a price that is double the previous time interval but a price that is slightly higher.” According to Roozbehani, the same theoretical framework that he and his colleagues adopt in their paper should enable the analysis and development of practical pricing models.

But minimizing the risks of giving consumers real-time pricing information also diminishes the benefits. “Possibly, when you need an aggressive response from the consumers — say the wind drops — you’re not going to get it,” Roozbehani says.

One way to improve that trade-off, Roozbehani explains, would be for customers to actually give utilities information about how they would respond to different prices at different times. Utilities could then tune the prices that they pass to consumers much more precisely, to maximize responsiveness to fluctuations in the market while minimizing the risk of instability. Collecting that information would be difficult, but Roozbehani’s hunch is that the benefits would outweigh the costs. He’s currently working on expanding his model so that it factors in the value of information, to see if his hunch is right.

“As far as I know, very, very few people are analyzing the dynamics of electricity markets with experience from control theory,” says Eugene Litvinov, senior director of business architecture and technology at ISO New England, the organization that oversees the operation of the electrical grid in the six New England states. “I think we should encourage these kinds of studies, because regulatory bodies and government are pushing for certain things, and they don’t realize how far they can push. For example, they want to have 30 percent wind penetration by 2020, or something like this, but that could cause serious issues for the grid. Without that kind of analysis, the operators would be very uncomfortable just jumping over the cliff.”

But, Litvinov adds, an accurate model of the dynamics of energy consumption would have to factor in consumers’ responses, not only to changing electricity prices, but also to each other’s responses. “It’s like a game,” Litvinov says. “People will have to start adopting more sophisticated strategies. That whole dynamic is itself a subject for study.” Roozbehani agrees, pointing out that he, Dahleh, Mitter, and colleagues have already published research that begins to examine exactly the questions that Litvinov raises.