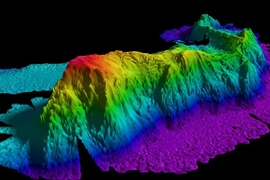 ↓ Download Image
Caption: A map of a seamount in the Arctic Ocean created by gathering data with a multibeam echo sounder. A team of researchers found that topographic features such as seamounts, ridges, and continental margins can trap deep waters from migrating to flatter, calmer parts of the ocean.

Caption:
A map of a seamount in the Arctic Ocean created by gathering data with a multibeam echo sounder. Researchers have found that such topographic features can trap deep waters and produce turbulence.

At high latitudes, such as near Antarctica and the Arctic Circle, the ocean’s surface waters are cooled by frigid temperatures and become so dense that they sink a few thousand meters into the ocean’s abyss.

Ocean waters are thought to flow along a sort of conveyor belt that transports them between the surface and the deep in a never-ending loop. However, it remains unclear where the deep waters rise to the surface, as they ultimately must. This information would help researchers estimate how long the ocean may store carbon in its deepest regions before returning it to the surface.

Now scientists from MIT, Woods Hole Oceanographic Institution (WHOI), and the University of Southampton in the U.K. have identified a mechanism by which waters may rise from the ocean’s depths to its uppermost layers. Their results are published today in the journal Nature Communications.

Through numerical modeling and observations in the Southern Ocean, the team found that topographic features such as seamounts, ridges, and continental margins can trap deep waters from migrating to flatter, calmer parts of the ocean. The underwater chasms and cliffs generate turbulent flows, similar to wind that whips between a city’s skyscrapers. The longer water is trapped among these topographic features, the more it mixes with upper layers of the ocean, swirling its way back toward the surface.

“In the abyssal ocean, you have 4,000-meter sea mountains and very deep troughs, up and down, and these topographic features help create turbulence,” says Raffaele Ferrari, the Cecil and Ida Green Professor of Oceanography in MIT’s Department of Earth, Atmospheric and Planetary Sciences. “What seems to be emerging is that water comes back up from the abyss by spending a lot of time in these places where turbulence is really strong.”

Knowing there are hotspots where deep waters return to the surface may help scientists identify regions where carbon, once absorbed from the atmosphere and stored deep in the ocean, rises and is released back to the atmosphere.

“The general understanding is that abyssal waters take few to several thousand years to resurface,” says lead author and MIT postdoc Ali Mashayek. “If a considerable amount of such upwelling occurs rapidly along sloped boundaries, continental margins, and mid-ocean ridges, then the timescale of recycling of abyssal waters can be shorter.”

Ferrari and Mashayek’s co-authors are Sophia Merrifield, an MIT graduate student; Jim Ledwell and Lou St. Laurent of WHOI; and Alberto Naveira Garabato of the University of Southampton.

The power of 10 light bulbs

In cold polar regions, the amount of water that continually sinks to the deep ocean is estimated to be “about 107 cubic meters per second — 50 times the transport of the Amazon River,” Ferrari says.

In 1966, acclaimed oceanographer Walter Munk addressed the puzzle of how all this deep water returns to the surface, proposing that small-scale ocean turbulence may drive heavy, deep water to mix and rise. This turbulence, he posited, takes the form of breaking internal gravity waves that travel between water layers of different densities, below the ocean’s surface.

Munk calculated the mixing power that would have to be generated by breaking internal gravity waves to bring all the ocean’s deep water back up to the surface. The number, Ferrari says, is equivalent to “about 10 incandescent light bulbs per cubic kilometer of the ocean.”

Since then, oceanographers have identified limited areas, such as seamounts and ridges, that create turbulence similar to what Munk theorized.

“But if you summed those few places up, you didn’t seem to come up to the number you needed to bring all that water back up,” Ferrari says.

“They released a blob of dye, like a drop of milk in a coffee cup, and let the ocean mix it around,” Ferrari says.

Over two years, they sampled the tracer at various stations downstream from where it was released, and found that it experienced very little turbulence, or mixing, in parts of the ocean with few topographic features. However, once the tracer crossed Drake Passage, it encountered seamounts and ridges, and “all of a sudden, it started to spread in the vertical quite fast, at three times the rate predicted by Munk,” Ferrari says.

What was driving this accelerated mixing? To find out, the team, led by Mashayek, developed a numerical model to simulate the Southern Ocean region — no small task, as it was unclear whether such a model could have high enough resolution to reproduce a tracer’s small-scale movements amid a vast volume of seawater.

“I did some preliminary calculations, back of the envelope estimates, and realized we would have just enough resolution to be able to do it,” Mashayek recalls.

The researchers used MIT’s general circulation model — a numerical model designed to study the Earth’s atmosphere, ocean, and climate — as their framework, and programmed into it all the external forces that are known to exist in the Southern Ocean, including wind patterns, solar heating, evaporation, and precipitation. They then worked measurements from the DIMES experiment into the model and extrapolated the turbulence across the entire ocean region, given the underlying topography.

The team then placed a tracer in its model at the same location where the real tracer was released into the Southern Ocean, and observed that, indeed, it spread vertically, at the same rate that the researchers observed in the field, proving that the model was representing the real ocean’s turbulence.

Looking more closely at their simulations, the researchers observed that regions with topography such as seamounts and ridges were essentially trapping the tracer for long periods of time, buffeting and mixing it vertically, before the tracer escaped and drifted through calmer waters.

The researchers believe the turbulence that occurs in these isolated regions over long periods of time may measure up to the total amount of mixing that Munk initially predicted. This mixing process may thus explain how waters in the deep ocean swell back up to the surface.

“Mixing-induced upwelling is globally relevant,” Mashayek says. “If our finding in the Southern Ocean extends to other mixing hotspots around the globe, then it will somewhat reshape our understanding of role of turbulent mixing in ocean overturning circulation. It also has important implications for parameterization of mixing processes in climate models.”