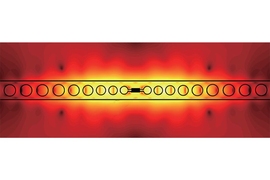 ↓ Download Image
Caption: A micrograph of the MIT researchers’ new device, with a visualization of electrical-energy measurements and a schematic of the device layout superimposed on it.

Caption:
A micrograph of the MIT researchers’ new device, with a visualization of electrical-energy measurements and a schematic of the device layout superimposed on it.
Credits:
Courtesy of the researchers

Ordinarily, light particles — photons — don’t interact. If two photons collide in a vacuum, they simply pass through each other.

An efficient way to make photons interact could open new prospects for both classical optics and quantum computing, an experimental technology that promises large speedups on some types of calculations.

But in the latest issue of Physical Review Letters, MIT researchers describe a new technique for enabling photon-photon interactions at room temperature, using a silicon crystal with distinctive patterns etched into it. In physics jargon, the crystal introduces “nonlinearities” into the transmission of an optical signal.

“All of these approaches that had atoms or atom-like particles require low temperatures and work over a narrow frequency band,” says Dirk Englund, an associate professor of electrical engineering and computer science at MIT and senior author on the new paper. “It’s been a holy grail to come up with methods to realize single-photon-level nonlinearities at room temperature under ambient conditions.”

Joining Englund on the paper are Hyeongrak Choi, a graduate student in electrical engineering and computer science, and Mikkel Heuck, who was a postdoc in Englund’s lab when the work was done and is now at the Technical University of Denmark.

Quantum computers harness a strange physical property called “superposition,” in which a quantum particle can be said to inhabit two contradictory states at the same time. The spin, or magnetic orientation, of an electron, for instance, could be both up and down at the same time; the polarization of a photon could be both vertical and horizontal.

If a string of quantum bits — or qubits, the quantum analog of the bits in a classical computer — is in superposition, it can, in some sense, canvass multiple solutions to the same problem simultaneously, which is why quantum computers promise speedups.

Most experimental qubits use ions trapped in oscillating magnetic fields, superconducting circuits, or — like Englund’s own research — defects in the crystal structure of diamonds. With all these technologies, however, superpositions are difficult to maintain.

Because photons aren’t very susceptible to interactions with the environment, they’re great at maintaining superposition; but for the same reason, they’re difficult to control. And quantum computing depends on the ability to send control signals to the qubits.

That’s where the MIT researchers’ new work comes in. If a single photon enters their device, it will pass through unimpeded. But if two photons — in the right quantum states — try to enter the device, they’ll be reflected back.

The quantum state of one of the photons can thus be thought of as controlling the quantum state of the other. And quantum information theory has established that simple quantum “gates” of this type are all that is necessary to build a universal quantum computer.

The researchers’ device consists of a long, narrow, rectangular silicon crystal with regularly spaced holes etched into it. The holes are widest at the ends of the rectangle, and they narrow toward its center. Connecting the two middle holes is an even narrower channel, and at its center, on opposite sides, are two sharp concentric tips. The pattern of holes temporarily traps light in the device, and the concentric tips concentrate the electric field of the trapped light.

The researchers prototyped the device and showed that it both confined light and concentrated the light’s electric field to the degree predicted by their theoretical models. But turning the device into a quantum gate would require another component, a dielectric sandwiched between the tips. (A dielectric is a material that is ordinarily electrically insulating but will become polarized — all its positive and negative charges will align in the same direction — when exposed to an electric field.)

When a light wave passes close to a dielectric, its electric field will slightly displace the electrons of the dielectric’s atoms.  When the electrons spring back, they wobble, like a child’s swing when it’s pushed too hard. This is the nonlinearity that the researchers’ system exploits.

The size and spacing of the holes in the device are tailored to a specific light frequency — the device’s “resonance frequency.” But the nonlinear wobbling of the dielectric’s electrons should shift that frequency.

Ordinarily, that shift is mild enough to be negligible. But because the sharp tips in the researchers’ device concentrate the electric fields of entering photons, they also exaggerate the shift. A single photon could still get through the device. But if two photons attempted to enter it, the shift would be so dramatic that they’d be repulsed.

The device can be configured so that the dramatic shift in resonance frequency occurs only if the photons attempting to enter it have particular quantum properties — specific combinations of polarization or phase, for instance. The quantum state of one photon could thus determine the way in which the other photon is handled, the basic requirement for a quantum gate.

Englund emphasizes that the new research will not yield a working quantum computer in the immediate future. Too often, light entering the prototype is still either scattered or absorbed, and the quantum states of the photons can become slightly distorted. But other applications may be more feasible in the near term. For instance, a version of the device could provide a reliable source of single photons, which would greatly abet a range of research in quantum information science and communications.

“This work is quite remarkable and unique because it shows strong light-matter interaction, localization of light, and relatively long-time storage of photons at such a tiny scale in a semiconductor,” says Mohammad Soltani, a nanophotonics researcher in Raytheon BBN Technologies’ Quantum Information Processing Group. “It can enable things that were questionable before, like nonlinear single-photon gates for quantum information. It works at room temperature, it’s solid-state, and it’s compatible with semiconductor manufacturing. This work is among the most promising to date for practical devices, such as quantum information devices.”