Tiny “motors” are driven by light 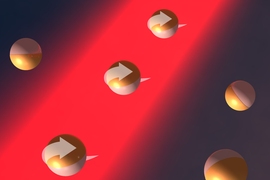 ↓ Download Image
Caption: Researchers have created in simulations the first system in which can be manipulated by a beam of ordinary light rather than the expensive specialized light sources required by other systems.
Credits: Image: Christine Daniloff/MIT

Caption:
Researchers have created in simulations the first system in which can be manipulated by a beam of ordinary light rather than the expensive specialized light sources required by other systems.
Credits:
Image: Christine Daniloff/MIT

Science fiction is full of fanciful devices that allow light to interact forcefully with matter, from light sabers to photon-drive rockets. In recent years, science has begun to catch up; some results hint at interesting real-world interactions between light and matter at atomic scales, and researchers have produced devices such as optical tractor beams, tweezers, and vortex beams.

Now, a team at MIT and elsewhere has pushed through another boundary in the quest for such exotic contraptions, by creating in simulations the first system in which particles —  ranging from roughly molecule- to bacteria-sized — can be manipulated by a beam of ordinary light rather than the expensive specialized light sources required by other systems. The findings are reported today in the journal Science Advances, by MIT postdocs Ognjen Ilic PhD ’15, Ido Kaminer, and Bo Zhen; professor of physics Marin Soljačić; and two others.

Most research that attempts to manipulate matter with light, whether by pushing away individual atoms or small particles, attracting them, or spinning them around, involves the use of sophisticated laser beams or other specialized equipment that severely limits the kinds of uses of such systems can be applied to. “Our approach is to look at whether we can get all these interesting mechanical effects, but with very simple light,” Ilic says.

The team decided to work on engineering the particles themselves, rather than the light beams, to get them to respond to ordinary light in particular ways. As their initial test, the researchers created simulated asymmetrical particles, called Janus (two-faced) particles, just a micrometer in diameter — one-hundredth the width of a human hair. These tiny spheres were composed of a silica core coated on side with a thin layer of gold.

When exposed to a beam of light, the two-sided configuration of these particles causes an interaction that shifts their axes of symmetry relative to the orientation of the beam, the researchers found. At the same time, this interaction creates forces that set the particles spinning uniformly. Multiple particles can all be affected at once by the same beam. And the rate of spin can be changed by just changing the color of the light.

The same kind of system, the researchers, say, could be applied to producing different kinds of manipulations, such as moving the positions of the particles. Ultimately, this new principle might be applied to moving particles around inside a body, using light to control their position and activity, for new medical treatments. It might also find uses in optically based nanomachinery.

About the growing number of approaches to controlling interactions between light and material objects, Kaminer says, “I think about this as a new tool in the arsenal, and a very significant one.”

Ilic says the study “enables dynamics that may not be achieved by the conventional approach of shaping the beam of light,” and could make possible a wide range of applications that are hard to foresee at this point. For example, in many potential applications, such as biological uses, nanoparticles may be moving in an incredibly complex, changing environment that would distort and scatter the beams needed for other kinds of particle manipulation. But these conditions would not matter to the simple light beams needed to activate the team’s asymmetric particles.

“Because our approach does not require shaping of the light field, a single beam of light can simultaneously actuate a large number of particles,” Ilic says. “Achieving this type of behavior would be of considerable interest to the community of scientists studying optical manipulation of nanoparticles and molecular machines.” Kaminer adds, “There’s an advantage in controlling large numbers of particles at once. It’s a unique opportunity we have here.”

Soljačić says this work fits into the area of topological physics, a burgeoning area of research that also led to last year’s Nobel Prize in physics. Most such work, though, has been focused on fairly specialized conditions that can exist in certain exotic materials called periodic media. “In contrast, our work investigates topological phenomena in particles,” he says.

And this is just the start, the team suggests. This initial set of simulations only addressed the effects with a very simple two-sided particle. “I think the most exciting thing for us,” Kaminer says, “is there’s an enormous field of opportunities here. With such a simple particle showing such complex dynamics,” he says, it’s hard to imagine what will be possible “with an enormous range of particles and shapes and structures we can explore.”

“Topology has been found to be a powerful tool in describing a select few physical systems,” says Mikael Rechtsman, an assistant professor of physics at Penn State who was not involved in this work. “Whenever a system can be described by a topological number, it is necessarily highly insensitive to imperfections that are present under realistic conditions. Soljačić's group has managed to find yet another important physical system in which this topological robustness can play a role, namely the control and manipulation of nanoparticles with light. Specifically, they have found that certain particles’ rotational states can be ‘topologically protected’ to be highly stable in the presence of a laser beam propagating through the system. This could potentially have importance for trapping and probing individual viruses and DNA, for example.”

The team also included Owen Miller at Yale University and Hrvoje Buljan at the University of Zagreb, in Croatia. The work was supported by the U.S. Army Research Office through the Institute for Soldier Nanotechnologies, the National Science Foundation, and the European Research Council.

UPI reporter Brooks Hays writes that MIT researchers have simulated a tiny motor that can be powered by light. Hays explains that the researchers designed, “a particle that could be powered and manipulated by simple light sources,” adding that the technique could be applied in medicine, in addition to a number of other fields.