CSAIL researcher honored for inventing the web and developing the protocols that spurred its global use.
Adam Conner-Simons | CSAIL
Publication Date:
Press Inquiries 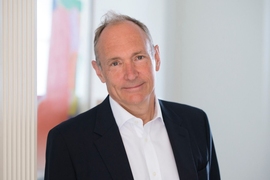 ↓ Download Image
Caption: MIT Professor Tim Berners-Lee was honored with the Turing Award for his work inventing the World Wide Web, the first web browser, and "the fundamental protocols and algorithms [that allowed] the web to scale."
Credits: Photo: Henry Thomas

Caption:
Tim Berners-Lee was honored with the Turing Award for his work inventing the World Wide Web, the first web browser, and "the fundamental protocols and algorithms [that allowed] the web to scale."
Credits:
Photo: Henry Thomas

MIT Professor Tim Berners-Lee, the researcher who invented the World Wide Web and is one of the world’s most influential voices for online privacy and government transparency, has won the most prestigious honor in computer science, the Association for Computing Machinery (ACM) A.M. Turing Award. Often referred to as “the Nobel Prize of computing,” the award comes with a $1 million prize provided by Google.

In its announcement today, ACM cited Berners-Lee for “inventing the World Wide Web, the first web browser, and the fundamental protocols and algorithms allowing the web to scale.” This year marks the 50th anniversary of the award.

A principal investigator at MIT’s Computer Science and Artificial Intelligence Laboratory (CSAIL) with a joint appointment in the Department of Electrical Engineering and Computer Science, Berners-Lee conceived of the web in 1989 at the European Organization for Nuclear Research (CERN) as a way to allow scientists around the world to share information with each other on the internet. He introduced a naming scheme (URIs), a communications protocol (HTTP), and a language for creating webpages (HTML). His open-source approach to coding the first browser and server is often credited with helping catalyzing the web’s rapid growth.

“I’m humbled to receive the namesake award of a computing pioneer who showed that what a programmer could do with a computer is limited only by the programmer themselves,” says Berners-Lee, the 3Com Founders Professor of Engineering at MIT. “It is an honor to receive an award like the Turing that has been bestowed to some of the most brilliant minds in the world.”

Berners-Lee is founder and director of the World Wide Web Consortium (W3C), which sets technical standards for web development, as well as the World Wide Web Foundation, which aims to establish the open web as a public good and a basic right. He also holds a professorship at Oxford University.

As director of CSAIL’s Decentralized Information Group, Berners-Lee has developed data systems and privacy-minded protocols such as “HTTP with Accountability” (HTTPA), which monitors the transmission of private data and enables people to examine how their information is being used. He also leads Solid (“social linked data”), a project to re-decentralize the web that allows people to control their own data and make it available only to desired applications.

"Tim Berners-Lee's career — as brilliant and bold as they come — exemplifies MIT's passion for using technology to make a better world,” says MIT President L. Rafael Reif. “Today we celebrate the transcendent impact Tim has had on all of our lives, and congratulate him on this wonderful and richly deserved award."

While Berners-Lee was initially drawn to programming through his interest in math, there was also a familial connection: His parents met while working on the Ferranti Mark 1, the world’s first commercial general-purpose computer. Years later, he wrote a program called Enquire to track connections between different ideas and projects, indirectly inspiring what later became the web.

“Tim’s innovative and visionary work has transformed virtually every aspect our lives, from communications and entertainment to shopping and business,” says CSAIL Director Daniela Rus. “His work has had a profound impact on people across the world, and all of us at CSAIL are so very proud of him for being recognized with the highest honor in computer science.”

Berners-Lee has received multiple accolades for his technical contributions, from being knighted by Queen Elizabeth to being named one of TIME magazine’s “100 Most Important People of the 20th Century.” He will formally receive the Turing Award during the ACM’s annual banquet June 24 in San Francisco.

Prof. Tim Berners-Lee has been awarded the Association for Computing Machinery’s (ACM) Turing prize for his work developing the World Wide Web, reports Hiawatha Bray for The Boston Globe. “It is hard to imagine the world before Sir Tim Berners-Lee’s invention,” says ACM President Vicki Hanson.

Prof. Tim Berners-Lee has won this year’s Turing Award, writes AP reporter Michael Liedtke. "It's a crowning achievement," says Berners-Lee of winning what is considered the Nobel prize for computing. "But I think the award is for the Web as a project, and the massive international collaborative spirit of all that have joined me to help."

Forbes reporter Janet Burns writes that Prof. Tim Berners-Lee has been named the recipient of this year’s Turing Award. In an interview with Burns, Berners-Lee emphasized the importance of internet privacy, and explained that he is currently working on building a “basic infrastructure in which each person has control of their own data.”

Prof. Tim Berners-Lee has been awarded the Turing Award for his work creating the World Wide Web and its underlying technology, reports Klint Finley for Wired. The web “succeeded because of the work he and so many other put into stewarding it as a platform,” writes Finley.