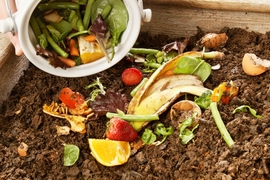 ↓ Download Image
Caption: A national study by MIT researchers provides one of the first in-depth looks at the characteristics of places that have adopted food recycling, revealing several new facts in the process.

Caption:
A national study by MIT researchers provides one of the first in-depth looks at the characteristics of places that have adopted food recycling, revealing several new facts in the process.

Food scraps. Okay, those aren’t the first words that come to mind when you think about the environment. But 22 percent of the municipal solid waste dropped into landfills or incincerators in the U.S. is, in fact, food that could be put to better use through composting and soil enrichment.

Moreover, food-scrap recycling programs, while still relatively uncommon, are having a growth moment in the U.S.; they’ve roughly doubled in size since 2010. Now, a national study by MIT researchers provides one of the first in-depth looks at the characteristics of places that have adopted food recycling, revealing several new facts in the process.

For instance: The places deploying food-scrap recycling programs are located throughout the country, not just in well-off coastal areas with popular environmental movements.

“You don’t have to be Seattle to have really good waste management,” says Lily Baum Pollans PhD ’17, a recent doctoral graduate of MIT’s Department of Urban Studies and Planning and corresponding author of the new paper outlining the study’s results.

Significantly, cities with food-scrap recycling often have “pay as you throw” garbage collection policies (PAYT), which typically charge residents for exceeding a certain volume of trash. These programs make people more active participants in waste collection by having them limit and sort garbage. Thus, adopting PAYT paves the way for food-scrap recycling.

“Having a ‘pay as you throw’ policy seems to make everything else easier,” says Jonathan S. Krones PhD ’16, a visiting scholar in the MIT Department of Materials Science and Engineering and a graduate of MIT’s Institute for Data, Systems, and Society.

The paper, “Patterns in municipal food scrap programming in mid-sized U.S. cities,” has been published online in the journal Resources, Conservation, and Recycling, where it will also appear in print. The research brings together multiple disciplines; the authors are Pollans, Krones, and Professor Eran Ben-Joseph, who is head of MIT’s Department of Urban Studies and Planning.

Food-scrap recycling has multiple benefits. Food scraps can be used for composting, which enriches soil and reduces emissions of methane (a potent greenhouse gas) from landfills. It also significantly reduces the volume of landfill needed in a given area. And recycling food can save cities and towns money by lowering the needed frequency of trash collection.

“If you remove food from your waste stream, you no longer have to remove garbage so often,” Krones says.

About one-third of all trash in the U.S. is recycled, a level that has held steady in the U.S. in recent years. But since 2010, the food-scrap recycling rate has increased from 2.7 percent to 5.1 percent, according to the Environmental Protection Agency (EPA). Still, there is clearly room for greater adoption of the practice.

“The food system is notoriously wasteful at all levels,” the authors write in the paper.

To understand that system better, the researchers in 2015 conducted a survey of 115 mid-sized U.S. cities with populations greater than 100,000 but less than 1 million. Places of that size almost always direct their own waste and recycling policies (which in some smaller municipalities are handled at the county level).

In all, 46 of the 115 cities have active food-scrap recycling programs of various forms, including educational programs, low-cost home composting bins, drop-off facilities, and curbside collection of food. By studying those cities, the researchers identified key characteristics of places that have adopted food recycling — which can then inform other cities and towns about the viability of the practice.

“This doesn’t have to be a specialty boutique program,” says Pollans, who is now an assistant professor of urban policy and planning at Hunter College.

Indeed, the researchers discovered that multiple economic and social factors, including income levels, seem to have negligible correlation with a place’s tendency to adopt food-scrap recycling. It is not as if wealthier, prosperous enclaves of people recycle food as a feel-good initiative.

Instead, a notable factor that predicts adoption of food-scrap recycling, other things being equal, is the existence of PAYT trash collection. This strongly suggests that such programs get residents in the habit of actively managing their trash disposal in response to financial incentives — and, as such, makes it seem less burdensome to separate food from other kinds of trash.

And as the researchers write in the paper, this suggests that “investing first in PAYT would mean that future diversion [meaning recycling] programs are more likely to be successful,” because they will be part of a “holistic policy vision” for trash.

Another form of infrastructure

As the researchers readily acknowledge, the long-term success of these food-scrap recycling programs — and not just their adoption — is an important consideration in need of further study. To that end, they are currently working on studies that look in more detail at the local political factors that lead to the adoption of food-scrap recycling, and at the bottom-line effectiveness of the programs themselves.

Still, as Ben-Joseph notes, it is important to give waste disposal the same empirical attention that other, higher-profile elements of trash, recycling, and infrastructure receive.

“Most people don’t think of solid waste as part of our infrastructure systems,” Ben-Joseph says. “There is an interest in water, sewer, electricity … but solid waste is a diffused structure which is hard to decipher. With this study we tried to understand and map what is taking place in over 100 cities across the country.”

Moreover, Pollans contends, “It is important to ask what the capacity of cities is in creating environmental transformations, given the lack of policy initiatives at higher levels of government.”

Funding for the research was provided by the Environmental Solutions Initiative at MIT, a multidisciplinary program that advances research and education on issues of the environment and sustainability.

The research project was initiated under the direction of the late professor Judith Layzer of MIT, whose influential work often examined the dynamics of environmental politics.