Preventing severe blood loss on the battlefield or in the clinic 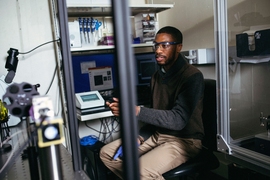 ↓ Download Image
Caption: At MIT graduate student Reginald Avery has been conducting research on a biomaterial that could stop wounded soldiers from dying from shock due to severe blood loss. “I wanted to do something related to the military because I grew up around that environment,” he says. “The people, the uniformed soldiers, and the well-controlled atmosphere created a good environment to grow up in, and I wanted to still contribute in some way to that community.”

Caption:
At MIT graduate student Reginald Avery has been conducting research on a biomaterial that could stop wounded soldiers from dying from shock due to severe blood loss. “I wanted to do something related to the military because I grew up around that environment,” he says. “The people, the uniformed soldiers, and the well-controlled atmosphere created a good environment to grow up in, and I wanted to still contribute in some way to that community.”

In a tiny room in the sub-basement of MIT’s Building 66 sits a customized, super-resolution microscope that makes it possible to see nanoscale features of a red blood cell. Here, Reginald Avery, a fifth-year graduate student in the Department of Biological Engineering, can be found conducting research with quiet discipline, occasionally fidgeting with his silver watch.

He spends most of his days either at the microscope, taking high-resolution images of blood clots forming over time, or at the computer, reading literature about super-resolution microscopy. Without windows to approximate the time of day, Avery’s watch comes in handy. Not surprisingly for those who know him, it’s set to military time.

Avery describes his father as a hard-working inspector general for the U.S. Army Test and Evaluation Command. Avery and his fraternal twin brother, Jeff, a graduate student in computer science at Purdue University, were born in Germany and lived for a portion of their childhoods on military bases in Hawaii and Alabama. Eventually the family moved to Maryland and entered civilian life, but Avery’s experiences on a military base never left him. At MIT he’s been conducting research on a biomaterial that could stop wounded soldiers from dying from shock due to severe blood loss.

“I wanted to do something related to the military because I grew up around that environment,” he says. “The people, the uniformed soldiers, and the well-controlled atmosphere created a good environment to grow up in, and I wanted to still contribute in some way to that community.”

Avery is one of the first graduate students to join the Program in Polymers and Soft Matter (PPSM) from the Department of Biological Engineering. When he first joined the lab of Associate Professor Bradley Olsen in the Department of Chemical Engineering, his focus was on optimizing and testing a material that could be topically applied to wounded soldiers.

The biomaterial is a hydrogel — a material consisting largely of water — with a viscosity similar to toothpaste. Gelatin proteins and inorganic silica nanoparticles are incorporated into the material and function as a substrate that helps to accelerate coagulation rates and reduce clotting times.

Co-advised by Ali Khademhosseini at Brigham and Women’s Hospital and in collaboration with others at Massachusetts General Hospital, Avery further developed the material so that it could be injected into ruptured blood vessels. Like a cork on a wine bottle, the biomaterial forms a plug in the leaky vessel and stops any blood loss. Avery’s research was published in Science Translational Medicine and featured on the front cover of the November 2016 issue.

The current standard for patching blood vessels is imperfect. Surgeons typically use metallic coils, special plastic beads, or compounds also found in super glue. Each technology has limitations that the nanocomposite hydrogel attempts to address.

“The old techniques don’t take advantage of tissue engineering. It can be difficult for a surgeon to deliver metallic coils and beads to the targeted site, and blood may sometimes still find a path through and result in re-bleeding. It’s also expensive, and some techniques have a finite time period to place the material where it needs to be,” Avery says. “We wanted to use a hydrogel that could completely fill a vessel and not allow any leakage to occur through that injury site.”

The nanocomposite, which can be injected easily with a syringe or catheter, has been tested in animal models without causing inflammatory side-effects or the formation of clots elsewhere in the animal’s circulatory system. Some in vitro experiments also indicate that the material could be useful for treating aneurysms.

For the past six months Avery has concentrated on uncovering the physical mechanism by which the nanocomposite material interacts with blood. A super-resolution microscope can achieve a resolution of 250 nanometers; a single red blood cell, for a comparison, is about 8,000 nanometers wide. Avery says the ability to visualize how the physiological molecules and proteins interact with the nanocomposite and other surgical tools may also help him design a better material. Obtaining a comprehensive view of the process, however, can be time-consuming.

“It’s taking snapshots every 10 or 20 seconds for approximately 30 minutes, and putting all of those pictures together,” he says. “What I want to do is visualize these gels and clots forming over time.”

While he is eager to see his material put to use to save lives, Avery is glad to be contributing to the work at the basic and translational research stages. He says he’s driven to appropriately characterize a treatment or biomaterial, ask the right questions, and make sure it functions just as well as, or better than, what is currently used in the clinic.

“I’m comfortable doing a thorough study in vitro to characterize materials or design some synthetic tests prior to in vivo testing,” he says. “You must be very confident in [the biomaterial] before getting to that step so that you’re effectively utilizing the animals, or even more important, you’re not putting a person at risk if something finally does get to that point.”

Avery also finds meaning in collaborating and helping others with their research. He has worked on projects using neutron scattering to elucidate the network structure of a homo-polypeptide, performed cell culture on thermoresponsive hydrogels, and developed highly elastic polypeptides, projects that Avery says aren’t directly applicable to his thesis work of treating internal bleeding. However, he was happy to have simply had the experience of learning something new.

“If I can help somebody with something then I’m going to try to do the best that I can. Whether it’s a homework assignment or something in lab, my goal is not to leave somebody worse off,” Avery says. “If there’s something I’ve done in the past that could help you now, I’m excited to show you and hopefully have it work out well for you. If it doesn’t, we can talk even longer to try to figure out what we could do to make it work better.”

Of the seven papers that Avery has been involved in over the past three years, almost half were collaborative projects outside the area of his thesis work.

Avery hopes to finish his PhD thesis by the summer of next year. Afterward, he envisions working for a research institute that is devoted to a single disease or condition, or perhaps for a research center associated with a hospital within the military health system so that he could continue developing biomaterials, diagnostics, or other approaches to help soldiers.

“I’m usually excited to help somebody get something done or get something done for my project. It’s always exciting to get closer to determining the optimum concentration that you need, seeing that one data point that’s higher than the others, or getting that nice image that shows the effect that you have hypothesized,” Avery says. “That’s still a motivating aspect of coming to lab, to eventually get those results. It can take a long time to get there but once you do, you appreciate the journey.”