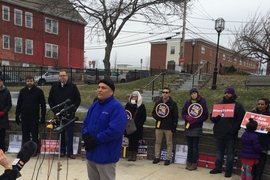 ↓ Download Image
Caption: “I feel very happy today. The most fabulous gift that I have in my life is to be with my family,” Francisco Rodriguez said at a Dec. 22 press conference in Bellingham Hill Park in Chelsea, Massachusetts.
Credits: Photo: Anne Trafton/MIT News Office 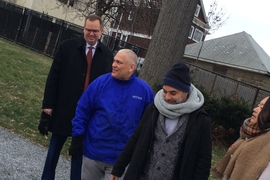 ↓ Download Image
Caption: After being held in detention for more than five months by U.S. Immigration and Customs Enforcement (ICE), MIT custodian and father of four Francisco Rodriguez (center) will be spending Christmas at home with his family.
Credits: Photo: Anne Trafton/MIT News Office

Caption:
“I feel very happy today. The most fabulous gift that I have in my life is to be with my family,” Francisco Rodriguez said at a Dec. 22 press conference in Bellingham Hill Park in Chelsea, Massachusetts.
Credits:
Photo: Anne Trafton/MIT News Office

Caption:
After being held in detention for more than five months by U.S. Immigration and Customs Enforcement (ICE), MIT custodian and father of four Francisco Rodriguez (center) will be spending Christmas at home with his family.
Credits:
Photo: Anne Trafton/MIT News Office

After being held in detention for more than five months by U.S. Immigration and Customs Enforcement (ICE), MIT custodian and father of four Francisco Rodriguez will be spending Christmas at home with his family.

While in detention, Rodriguez missed the birth of his son and spent his own birthday away from his family. On Friday, Rodriguez thanked all of the supporters who worked for his release and said that his faith in God helped to sustain him throughout his detention.

“I feel very happy today. The most fabulous gift that I have in my life is to be with my family,” Rodriguez said at a press conference today at Bellingham Hill Park in Chelsea, Massachusetts. “It’s a miracle. Miracles can happen any time. It’s fantastic to be home and to be free.”

Rodriguez, who has been employed at MIT for five years, left his home country of El Salvador in 2006, fearing violence after a co-worker was murdered. He applied for asylum and although his application was denied, he has been granted yearly stays of removal and permits authorizing him to work in the United States. In July, he was detained by ICE during one of his regular check-ins with the agency.

Earlier this month, the 10th Circuit Court of Appeals in Denver granted a request to stay his removal from the United States while he appeals the rejection of his asylum request. On Monday, his legal team filed a motion to seek his immediate release from custody, and on Wednesday, the U.S. Attorney’s office in Boston told Rodriguez’ lawyers that they would not oppose his request to be released pending the outcome of the appeal.

"That Francisco has been released in time to share Christmas with his family is a gift to us all. He is a beloved member of the MIT community whose hard work and eagerness to serve his community are a beautiful reflection of the values of MIT, and of America," says MIT President L. Rafael Reif. "While we celebrate his return to his wife, daughters, and newborn son, however, we recognize that this reprieve is not the same as a permanent offer of asylum. We strongly believe that Francisco should be allowed to remain in the United States permanently."

After Rodriguez was taken into custody in July, the MIT community came together to support him, holding rallies, signing petitions, and raising money. MIT’s Office of the General Counsel secured the law firm of Goodwin Procter to join Rodriguez’ legal team, pro bono.

“I want to thank the whole MIT community — professors, students, [Director of Campus Services and Chief of Police] John DiFava, the lawyers for MIT, the president, my coworkers — for all the help,” Rodriguez said after Friday’s press conference. “They really support people. MIT is a family. That’s the way that they are.”

Rodriquez described a joyous reunion with his daughters, who had not been expecting him until Friday. He was released earlier than planned, on Thursday, and was able to surprise them after school.

“Yesterday when my first daughter came home from school, she wasn’t expecting I would be home, and when she saw me she just jumped in the air, she was so happy,” he said.

Just days ago, Rodriguez was thinking about how he might celebrate Christmas with some of his fellow detainees, but now he plans to spend the holiday attending church and celebrating with his family.

“My daughters said the best gift they have is ‘you being here with us, Daddy,’” Rodriguez said. “We shared this great gift already, before Christmas.”

In the meantime, Rodriguez’ legal team will continue its efforts to obtain asylum for Rodriguez.

“This is just the first step for us,” said John Bennett, a Goodwin Procter partner working on the case. “This has been a gratifying past few days, and our work with Francisco continues. We believe Francisco is a strong candidate for (asylum). We think that keeping him here will make us a stronger country and all of us a better people.”

Thomas Kochan, a professor at MIT’s Sloan School of Management who has helped raised money for Rodriguez’ expenses, came to the press conference to convey good wishes from MIT. “Welcome back to our community, and we look forward to seeing you back here,” he told Rodriguez.

NBC Boston reports that ICE has released MIT custodian Francisco Rodriguez. “Many members of the MIT community have strongly supported that Francisco be released from detention to be with his family so the news of his release is extremely welcome. We also strongly believe Francisco should be allowed to remain in the U.S. permanently," according to a statement from MIT.