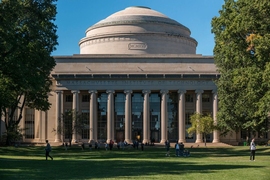 On Thursday, July 13, MIT custodian Francisco Rodriguez was detained by U.S. Immigration and Customs Enforcement (ICE). Rodriguez — a father of two whose wife will soon deliver their third child — has been working at MIT for five years. The Boston Globe reports that he left his home country of El Salvador fearing for his life after the murder of a colleague. Rodriguez applied for asylum in the U.S. and, although the application was denied, he has been granted yearly stays of removal and permits authorizing him to work in the U.S.

While ICE continues to have discretion in granting further stays of his removal order, Rodriguez was told last month that he would need to leave the country. Many at MIT and beyond voiced their opposition, through rallies organized by the union 32BJ SEIU, a petition signed by more than a thousand members of the MIT community, and a letter from Senators Elizabeth Warren and Ed Markey and Congressman Mike Capuano. Despite these efforts, Rodiguez has been taken into custody and could be deported at any time.

To learn more about MIT’s efforts to help Rodriguez stay with his family in the U.S., MIT News spoke with Vice President and General Counsel Mark DiVincenzo, who has led the Institute’s response, and Israel Ruiz, executive vice president and treasurer, who oversees the Institute’s facilities and human resources departments.

Q: What is MIT doing to help?

DiVincenzo: Many people in the MIT community share the sense that Francisco deserves our support in his request to stay in this country so he can continue to look after his family; indeed, more than 1,000 community members — students, faculty, staff, and alumni — signed a petition on Francisco’s behalf.

We first became aware in early June that Francisco was denied an extension of his stay of removal, leading to the real possibility that he would be deported. President Reif strongly urged me, and the entire MIT senior administration, to find ways to help. While I can’t represent Francisco personally, I’ve met with him and his immigration attorney, and MIT has marshalled resources from offices across campus, including Human Resources, Facilities, and Israel’s office, as well as my own. In coordination with Francisco and his attorney, we have written letters to the Immigration and Customs Enforcement office and taken other action to assist, including securing a prominent Boston law firm to join his legal team, pro bono.

We also welcome the efforts of Francisco’s union — 32BJ SEIU — to rally wider community understanding and concern. This past Tuesday, Director of Campus Services and Chief of Police John DiFava spoke at a rally on our campus organized by the SEIU, as did MIT Undergraduate Association representative Ashti Shah ’20 and one of Francisco’s coworkers. Chief DiFava also requested a personal meeting with ICE.

With the news of Francisco’s detention last Thursday [July 13], Goodwin, the law firm we arranged to help in this cause, filed a lawsuit on Francisco’s behalf against the U.S. government seeking an emergency order to stop the deportation. There will be a hearing on Monday, July 17, and a letter sent by MIT’s Executive Vice President and Treasurer [Israel Ruiz] is part of the record before the court. I, and others at MIT, hope to attend the hearing and I will continue to work with Francisco’s team to explore other options for MIT to help his case.

Needless to say, this is an extremely disheartening situation. When I see how hard Francisco’s colleagues in the Facilities Department are working to help him and his family, and how many others from across MIT have been inspired to reach out, it makes me very proud to belong to the MIT community. This is what we mean when we say “One MIT.”

Q: Why is MIT getting involved in this case?

Ruiz: At MIT, we have a big, demanding mission: to make a better world through education, research, and innovation. Our ability to achieve that mission depends on each of us, and all of us. Francisco has been a positive, rock-solid member of our community for years. Standing with him in this case is just the obvious right thing to do.

We also welcome and embrace the diversity of life experiences and perspectives at MIT. Our employees, students, and faculty come from all over the world, and there are many individuals here on a path to citizenship. Some, like Francisco’s children, are Americans but anxious about their own parents or other loved ones who may be targeted for deportation. Our international students are generally anxious about the uncertain immigration environment. We stand with all of them, and we are grateful for all that they bring to our MIT family.

Certainly, reasonable people can disagree on our nation’s immigration policy. But standing with Francisco isn’t about politics or Washington. It’s about seeking fair treatment for an upstanding individual who is the breadwinner for a young family, works at MIT, and has his own business, and who has consistently proven his value to MIT and to his home community in Chelsea.

I hope those who may disagree on policy points can take a moment to consider the whole picture, because it includes many factors in Francisco’s favor. Put simply: Those who know Francisco best personally attest to his work ethic and character. He has been an excellent employee, even earning a promotion in the past five years. Because he is legally authorized to work, he pays taxes on his earnings. And he continues to be responsible for the well-being of two young children, both of them American citizens, as well as for his pregnant wife.

The government has considerable discretion in a case like this. Federal officials have decided in favor of fairness and compassion in Francisco’s case for years, precisely because of his character and his conscientiousness in working with them. We believe he deserves the same treatment now, more than ever.

The MIT community also exists among the broader society. So what kind of society do we want to live in? I believe the answer is one where a hard-working individual such as Francisco — committed to his family, active in his local community, and loving this country, as he attested to just yesterday — is treated justly and allowed to stay and seek citizenship.

Q: How can I stay informed about members of the MIT community who may need help? How can I get help if I need it?

Ruiz: As you would guess, to protect the privacy of community members, I can’t talk specifically about individuals. However, there are certainly ways for affected individuals to get the answers they need. And MIT is actively monitoring issues in this area, so we can respond effectively. Specifically:

Chancellor Barnhart has also charged a working group, led by Professor Chris Capozzola, to examine and discuss potential changes to federal law and policy, including immigration policies that have the potential to limit students’ access to MIT or their ability to thrive here.

MIT custodian Francisco Rodriguez, who has been detained by U.S. Immigration and Customs Enforcement (ICE), wrote a letter to The Boston Globe explaining that his family needs him. “I believe in this country,” writes Rodriguez. “I believe in what people can do here.”