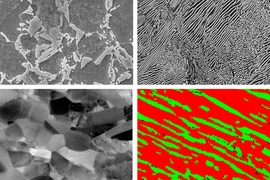 ↓ Download Image
Caption: Researchers have developed a type of steel with three characteristics that help it resist microcracks that lead to fatigue failure: a layered nanostructure, a mixture of microstructural phases with different degrees of hardness, and a metastable composition. They compared samples of metal with just one or two of these key attributes (top left, top right, and bottom left) and with all three (bottom right). The metal alloy with all three attributes outperformed all the others in crack resistance.

Caption:
Researchers have developed a type of steel with three characteristics that help it resist microcracks that lead to fatigue failure: a layered nanostructure, a mixture of microstructural phases with different degrees of hardness, and a metastable composition. They compared samples of metal with just one or two of these key attributes (top left, top right, and bottom left) and with all three (bottom right). The metal alloy with all three attributes outperformed all the others in crack resistance.

Metal fatigue can lead to abrupt and sometimes catastrophic failures in parts that undergo repeated loading, or stress. It’s a major cause of failure in structural components of everything from aircraft and spacecraft to bridges and powerplants. As a result, such structures are typically built with wide safety margins that add to costs.

Now, a team of researchers at MIT and in Japan and Germany has found a way to greatly reduce the effects of fatigue by incorporating a laminated nanostructure into the steel. The layered structuring gives the steel a kind of bone-like resilience, allowing it to deform without allowing the spread of microcracks that can lead to fatigue failure.

The findings are described in a paper in the journal Science by C. Cem Tasan, the Thomas B. King Career Development Professor of Metallurgy at MIT; Meimei Wang, a postdoc in his group; and six others at Kyushu University in Japan and the Max Planck Institute in Germany.

“Loads on structural components tend to be cyclic,” Tasan says. For example, an airplane goes through repeated pressurization changes during every flight, and components of many devices repeatedly expand and contract due to heating and cooling cycles. While such effects typically are far below the kinds of loads that would cause metals to change shape permanently or fail immediately, they can cause the formation of microcracks, which over repeated cycles of stress spread a bit further and wider, ultimately creating enough of a weak area that the whole piece can fracture suddenly.

“A majority of unexpected failures [of structural metal parts] are due to fatigue,” Tasan says. For this reason, large safety factors are used in component design, leading to increased costs during production and component life.

Tasan and his team were inspired by the way nature addresses the same kind of problem, making bones lightweight but very resistant to crack propagation. A major factor in bone’s fracture resistance is its hierarchical mechanical structure, so the team investigated microstructures that would mimic this in a metal alloy.

The question was, he says, “Can we design a material with a microstructure that makes it most difficult for cracks to propagate, even if they nucleate?” Bone provided a clue to how to do that, through its hierarchical microstructure — that is, the way its internal structures have different patterns of voids and connections at many different length scales, with a lattice-like internal structure — that combines strength with light weight.

The team developed a kind of steel that has three key characteristics, which combine to limit the spread of cracks that do form. Besides having a layered structure that tends to keep cracks from spreading beyond the layers where they start, the material has microstructural phases with different degrees of hardness, which complement each other, so when a crack starts to form, “every time it wants to propagate further, it needs to follow an energy-intensive path,” and the result is a great reduction in such spreading. Also, the material has a metastable composition; tiny areas within it are poised between different stable states, some more flexible than others, and their phase transitions can help absorb the energy of spreading cracks and even lead the cracks to close back up.

To further understand the relative roles of these three characteristics, the team compared steels each with a combination of two out of the three key properties. None of these worked as well as the three-way combination, he says. “This showed us that our modification has better fatigue resistance than any of these.”

The testing of such materials under realistic conditions is difficult to do, Tasan explains, partly because of “the extreme sensitivity of these materials to surface defects. If you scratch it, it’s going to fail much faster.” So meticulous preparation and inspection of test samples is essential.

This finding is just a first step, Tasan says, and it remains to be seen what would be needed to scale up the material to quantities that could be commercialized, and what applications would benefit most. “Economics always comes into it,” he says. “I’m a metallurgist, and this is a new material that has interesting properties. Large industries such as automotive or aerospace are very careful about making changes in materials, as it brings extra effort and costs.”

But there are likely to be several uses where the material would be a significant advantage. “For critical applications, [the benefits] are so critical that change is worth the extra trouble” about the cost, he says. “This is an alloy that would be more expensive than a basic low-carbon steel, but the property benefits have been shown to be quite exceptional, and it’s with much lower amounts of alloying metals (and hence, costs) than other proposed materials.”

The research was supported by the European Research Council and MIT’s Department of Materials Science and Engineering. The team included Motomichi Koyama, Zhao Zhang, Kaneaki Tsuzaki, and Hiroshi Noguchi of Kyushu University in Fukuoka, Japan, and Dirk Ponge, and Dierk Raabe of the Max Planck Institute in Dusseldorf, Germany.