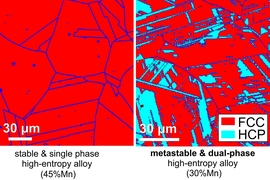 ↓ Download Image
Caption: These images show the crystal configurations, or phases, within samples of metal alloys: a single-phase stable alloy (left) and a dual-phase alloy (right), which is metastable (has more than one stable configuration). The dual-phase material turns out to have better strength and ductility than the singe-phase material, the researchers found.

Caption:
These images show the crystal configurations, or phases, within samples of metal alloys: a single-phase stable alloy (left) and a dual-phase alloy (right), which is metastable (has more than one stable configuration). The dual-phase material turns out to have better strength and ductility than the singe-phase material, the researchers found.
Credits:
Courtesy of the researchers

For centuries — in fact, since the Bronze Age began some 7,000 years ago — the creation of new metallic alloys has mostly been a trial-and-error process. Traditionally, one metal constituent was always dominant, with others making up a small fraction of the recipe. But a new study suggests a novel strategy that could help direct efforts to overturn this ancient lore, opening the way for new classes of alloys with previously unseen combinations of properties.

The new approach is described in a paper this week in the journal Nature, by C. Cem Tasan, the Thomas B. King Career Development Professor of Metallurgy in MIT’s Department of Materials Science and Engineering, and four others at the Max Planck Institute in Dusseldorf, Germany.

The new approach, Tasan says, also challenges the conventional wisdom that improving the strength of a metal alloy is always a tradeoff that results in a loss of ductility — the property that allows a metal to deform without fracturing, for example when it is stamped to form the body panels of a car.

“We have lots of experience from hundreds of years, through trial and error, and we know very well that when you start mixing metals in roughly equal amounts, you do not have good mechanical properties in most cases, due to the presence of brittle intermetallic phases,” Tasan explains. But in the last decade, there has been a renewed interest in exploring a category of metal mixtures known as high-entropy alloys (HEAs). These compounds contain multiple metallic elements in roughly equal amounts, which some materials scientists have proposed could yield single-phase microstructures and, in turn, improved mechanical strength and stability.

While this field is attracting high research interest, however, with more than 300 papers published last year on HEAs, most of the compounds studied have not produced any significant improvements in their properties, and have still suffered from the strength-ductility tradeoff, Tasan says. The main focus of the previous work, he says, has been on evaluating the proposed single-phase stabilization concept in different alloy systems.

But aiming for stable single-phase microstructures differs from the approach that has been taken with the most widely used metal of all — steel, of which 1,500 million tons are produced worldwide every year. One of the reasons for steel’s ubiquity is that its various alloys can be tuned to have a wide range of different properties, depending on the specific application. Advanced steels often have phases that are stable, but also some that are metastable (having more than one stable configuration). Under stress, metastable phases can transform to stable configurations, which improves their ability to resist fracture.

While the results reported so far for HEA materials have mostly not lived up to expectations, “there are definitely interesting benefits of following this idea [of combining roughly equal portions of metallic elements],” such as achieving a property called increased solid-solution hardening, Tasan says. “So we thought, why not combine the strength of this concept with the strengths of steels, the most important structural material for humanity?”

The new finding now being reported by Tasan and his colleagues is that in HEAs it is metastability, rather than the usually sought-after stability, that produces the most promising new alloys. A new alloy designed with these principles, composed of iron, manganese, cobalt, and chromium, “outperforms even the highest-performance, single-phase, high-entropy alloy,” Tasan says. And, it offers exceptionally high values of both strength and ductility.

“It’s like combining the best of two worlds: metastability, known from steels, and the solid-solution strengthening of HEAs,” he says. But more important than the properties of this particular alloy, he says, is the underlying strategy used to produce it, which could open up new avenues for the design of alloys with novel properties. “We think this is just one example of the kind of alloys that could be produced,” he says. Hopefully, “one could produce even better ones, since the new strategy is a generic tool for the design of new materials. I think this result will be very influential in guiding the HEA research community to achieve superior property combinations.”

Calling this work “unique and creative,” Ke Lu, professor and director of the Shenyang National Laboratory for Materials Science in China, who was not involved in this research, says: “The authors utilized different strengthening mechanisms into an alloy system in a very smart way, leading to a simultaneous increase of strength and ductility that are often exclusive. While each individual mechanism is well documented in many different systems, a synergic application of these effects is novel and original. The properties achieved are impressive indeed.” These findings could “open up new dimensions of materials innovation and development,” he adds.

In addition to Tasan, the work was carried out by Zhiming Li, Konda Pradeep, Yun Deng, and Dierk Raabe at the Max-Planck Institute for Iron Research in Dusseldorf, Germany. The work was supported by the European Research Council.

A renaissance in metals