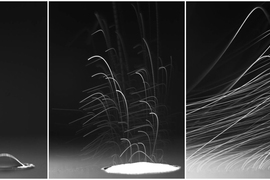 ↓ Download Image
Caption: A raindrop, splashing on a porous surface, can release thousands of aerosols, as captured here in high-speed imaging experiments.

Caption:
A raindrop, splashing on a porous surface, can release thousands of aerosols, as captured here in high-speed imaging experiments.

A good rain can have a cleansing effect on the land. But an MIT study published today in Nature Communications reports that, under just the right conditions, rain can also be a means of spreading bacteria.

Using high-resolution imaging, researchers from MIT’s Department of Mechanical Engineering observed the effect of raindrops falling on dry soil laden with bacteria. When falling at speeds mimicking those of a light rain, at temperatures similar to those in tropical regions, the drops released a spray of mist, or aerosols. Each aerosol carried up to several thousand bacteria from the soil. The researchers found the bacteria remained alive for more than an hour afterward.

If this airborne bacteria were lofted further by wind, it could travel a good distance before settling back on the ground to colonize a new location, says Cullen Buie, associate professor and the Esther and Harold E. Edergton Career Development Chair in the Department of Mechanical Engineering.

“Imagine you had a plant infected with a pathogen in a certain area, and that pathogen spread to the local soil,” Buie says. “We’ve now found that rain could further disperse it. Manmade droplets from sprinkler systems could also lead to this type of dispersal. So this [study] has implications for how you might contain a pathogen.”

Furthermore, the team calculated that precipitation around the world may be responsible for 1 to 25 percent of the total amount of bacteria emitted from land.

Following up an uptick

In 2015, Buie and his colleagues identified a mechanism by which rain produces aerosols: As a falling droplet makes contact with the ground, it traps tiny air bubbles at the ground’s surface, which rise up and burst through the droplet, creating a spray of much smaller water droplets, or aerosols. At the time, the group proposed that this mechanism may explain the origins of “petrichor” — the characteristic earthy smell that often follows a rainstorm.

Soon after the group published its results, a team of British scientists contacted Buie to see whether this same rainfall mechanism may help to spread bacteria, in particular Burkholderia pseudomallei, a bacteria that lives in soil, which has been known to cause lung infections in humans known as meliodosis.

“They’ve noticed a qualitative uptick in the number of infections of this disease after rainfall, and they had speculated that this particular soil-borne bacteria gets dispersed into the air after rainfall,” Buie says.

The group’s inquiry piqued Buie’s curiosity as to whether rain might help spread bacteria in general.

“That was one of the initial motivations for us to even try some of these experiments, to see whether bacteria in general could be dispersed and remain alive during the process,” Buie says.

In the lab, the team looked at rainfall’s effect on three nonpathogenic species of soil bacteria, which they infused in six types of dry soil, including clay, sandy clay, and sand.

The researchers simulated rainfall by dispensing single drops of water from various heights, through the hole of a small disc that was placed just above a soil sample to catch any aerosols bursting up from the surface. They varied the surface temperature of the soil, as well as the height at which a droplet was released, to speed up or slow down a droplet’s impact speed, thereby simulating certain intensities of rainfall.

They found droplets produced the highest number of aerosols in soils with temperatures of around 86 degrees Fahrenheit, similar to soils found in tropical regions. Droplets also produced more aerosols when dispensed on sandy clay soils; sand tended to absorb the droplets completely before any bubbles or aerosols could form. The researchers also observed higher aerosol counts when droplets fell at speeds between 1.4 and 1.7 meters per second — about the intensity of a light rain shower.

“At this just-right speed, water wicks into the soil without splashing, but fast enough to trap air,” Buie explains. “That trapped air gets released as bubbles that burst, releasing the aerosols. We found the relationship between the distribution of aerosol size and the number of bubbles bursting.”

Using these three parameters, along with estimates for the world’s total land area and precipitation patterns, the researchers estimated that the total number of bacteria dispersed by raindrops can range from 10,000 trillion to 800,000 trillion cells per year. As a result, global precipitation may contribute to releasing 1.6 to 25 percent of the total amount of bacteria from land.

“Further investigation is required to narrow down the range of global emission of bacteria by rain, but aerosol generation by rain could be a major mechanism of bacteria transfer into the environment,” says Joung. “Future work on these findings could provide new clues to trace soil-borne bacteria responsible for infections in humans, animals, and plants, as well as climate impacts due to cloud formation and ice nucleation.”

New Scientist reporter Sam Wong writes that MIT researchers used high-speed cameras to examine how raindrops can spread soil bacteria. “The researchers estimate that a single raindrop can transfer 0.01 per cent of bacteria on the soil surface into the air, and up to a quarter of bacteria emitted from the land might become airborne in this way.”

Popular Science reporter Kendra Pierre-Louis writes about a new study by MIT researchers that examines how rain drops help spread soil bacteria. The researchers found that “a single rain drop can transfer 0.01 percent of bacteria on the soil surface to the atmosphere.”

Using high-speed cameras and fluorescent dye, MIT researchers have uncovered how rain drops can spread soil bacteria, reports Rae Ellen Bichell for NPR. The researchers found that in a few microseconds “a single raindrop can create hundreds of tiny airborne droplets, each one carrying as many as several thousand live bacteria.”