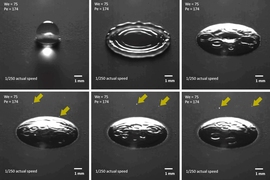 Ever notice an earthy smell in the air after a light rain? Now scientists at MIT believe they may have identified the mechanism that releases this aroma, as well as other aerosols, into the environment.

Using high-speed cameras, the researchers observed that when a raindrop hits a porous surface, it traps tiny air bubbles at the point of contact. As in a glass of champagne, the bubbles then shoot upward, ultimately bursting from the drop in a fizz of aerosols.

The team was also able to predict the amount of aerosols released, based on the velocity of the raindrop and the permeability of the contact surface.

The researchers suspect that in natural environments, aerosols may carry aromatic elements, along with bacteria and viruses stored in soil. These aerosols may be released during light or moderate rainfall, and then spread via gusts of wind.

“Rain happens every day — it’s raining now, somewhere in the world,” says Cullen R. Buie, an assistant professor of mechanical engineering at MIT. “It’s a very common phenomenon, and it was intriguing to us that no one had observed this mechanism before.”

Youngsoo Joung, a postdoc in Buie’s lab, adds that now that the group has identified a mechanism for raindrop-induced aerosol generation, the results may help to explain how certain soil-based diseases spread.

“Until now, people didn’t know that aerosols could be generated from raindrops on soil,” Joung says. “This finding should be a good reference for future work, illuminating microbes and chemicals existing inside soil and other natural materials, and how they can be delivered in the environment, and possibly to humans.”

Buie and Joung have published their results this week in the journal Nature Communications.

Capturing a frenzy, in microseconds

Buie and Joung conducted roughly 600 experiments on 28 types of surfaces: 12 engineered materials and 16 soil samples. In addition to acquiring commercial soils, Joung sampled soil from around MIT’s campus and along the Charles River. He also collected sandy soil from Nahant Beach in Nahant, Massachusetts.

In the lab, the researchers measured each soil sample’s permeability by first pouring the material into long tubes, then adding water to the bottom of each tube and measuring how fast the water rose through the soil. The faster this capillary rise, the more permeable the soil.

In separate experiments, the team deposited single drops of water on each surface, simulating various intensities of rainfall by adjusting the height from which the drops were released. The higher the droplet’s release, the faster its ultimate speed.

Joung and Buie set up a system of high-speed cameras to capture raindrops on impact. The images they produced revealed a mechanism that had not previously been detected: As a raindrop hits a surface, it starts to flatten; simultaneously, tiny bubbles rise up from the surface, and through the droplet, before bursting out into the air. Depending on the speed of the droplet, and the properties of the surface, a cloud of “frenzied aerosols” may be dispersed.

“Frenzied means you can generate hundreds of aerosol droplets in a short time — a few microseconds,” Joung explains. “And we found you can control the speed of aerosol generation with different porous media and impact conditions.”

From their experiments, the team observed that more aerosols were produced in light and moderate rain, while far fewer aerosols were released during heavy rain.

Buie says this mechanism may explain petrichor — a phenomenon first characterized by Australian scientists as the smell released after a light rain.

“They talked about oils emitted by plants, and certain chemicals from bacteria, that lead to this smell you get after a rain following a long dry spell,” Buie says. “Interestingly, they don’t discuss the mechanism for how that smell gets into the air. One hypothesis we have is that that smell comes from this mechanism we’ve discovered.”

High-speed footage captured by MIT researchers shows how rainfall can release aerosols into the environment, spreading aromatic elements, as well as bacteria and viruses, stored in soil.

From the ground up

Buie and Joung looked further into the relationship among raindrop velocity, surface properties, and aerosol generation, and came up with two dimensionless parameters that can be used to describe the relationship: the Weber number, which is a function of the impact speed of a droplet, and a modified Péclet number, which is used to contrast impact velocity and surface wettability.

Based on their calculations, the researchers found that aerosol generation is greatest when the ratio between the Weber and Péclet numbers is balanced, around 1 — a ratio that Buie and Joung expressed as the Washburn-Reynolds number. When this ratio is balanced,  raindrops are neither too fast nor too slow, and the surface is neither too wet nor too dry.

“When moderate or light rain hits sandy or clay soils, you can observe lots of aerosols, because sandy clay has medium wetting properties,” Joung says. “Heavy rain [has a high] impact speed, which means there’s not enough time to make bubbles inside the droplet.”

James Bird, an assistant professor of mechanical engineering at Boston University, says that scientists have long observed that raindrops can trap and release aerosols when falling on water. This paper, he says, is the first to show this effect on soil.

“I'm impressed by the extent [to which] the authors have unraveled the underlying physics,” says Bird, who was not involved in the research. “The aspect of this paper that I find most exciting is that it brings the conversation of bubble-induced aerosol formation from the ocean over to the land. Microbes from soil have been observed high in the atmosphere; this paper provides an elegant mechanism by which these microbes can be propelled past the stagnant layer of air around them to a place where the breeze can take them elsewhere.”

Joung and graduate student Zhifei Ge are now conducting similar experiments, with surfaces containing soil bacteria and pathogens such as E. coli, to observe whether such contaminants can be spread significantly via rainfall. In the current paper, he and Buie performed initial experiments using dyed liquid droplets on certain surfaces containing fluorescent dye. In those experiments, they observed through microscopy that the aerosols released from raindrops contained the dye — a finding that suggests such aerosols may also carry other contaminants, such as soil-based viruses and bacteria.

“Aerosols in the air certainly could be resulting from this phenomenon,” Buie says. “Maybe it’s not rain, but just a sprinkler system that could lead to dispersal of contaminants in the soil, for perhaps a wider area than you’d normally expect.”

Adds Joung: “To prevent transmission of microorganisms from nature to humans, we need to know the exact mechanism. In this work, we provide one possible way of transmission.”

In this New York Times video, James Gorman explores new MIT research examining how rainfall produces a scent. The researchers found that when raindrops hit porous surfaces they release aerosols. The scent is “not from the rain itself,” explains Prof. Cullen Buie, “it’s from the earth.”

“It turns out tiny bubbles may be to thank for that earthy smell we get after it rains, according to a study from researchers at the Massachusetts Institute of Technology,” writes Lori Grisham for USA Today. “The study may serve as a jumping-off point for other research about chemicals in soil.”

MIT researchers have found that when raindrops hit the ground they release aerosols, which produce a distinctive scent, reports Avianne Tan of ABC News. Prof. Cullen Buie explains that the findings also show how bacteria could spread through “chemicals being carried by aerosols."

Jared Silverman of USA Today reports on how MIT researchers have found that raindrops release aerosols when they hit the ground, causing a distinctive odor. The researchers found that “light to moderate rain produces more aerosols compared to heavy rain,” Silverman explains.

MIT scientists have uncovered the mechanism behind why rainfall can produce such a distinctive scent, writes Macrina Cooper-White for The Huffington Post. The researchers found that when rain hits a porous surface, tiny bubbles form. When the bubbles burst, they release aerosols, which carry the “rainlike aroma” into the air.

MIT researchers have discovered why rainfall produces such a distinctive smell, reports Rachel Feltman for The Washington Post. The researchers examined high-speed footage of raindrops and found “when rain hits the ground [it] may be sending out signature smells that get carried away on the wind."

Using high-speed cameras, MIT researchers have captured how the smell of rain is released into the air, the BBC reports. “The results may help to explain how some soil-based diseases are spread and the authors are now studying whether contaminants such as E. coli can be spread significantly via rainfall,” the BBC explains.