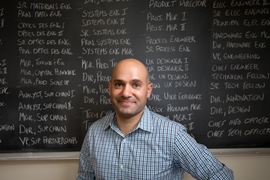 Jim Magarian spent nearly 10 years working for a major aerospace engineering company before becoming a graduate student at MIT, and many of the watershed moments in his engineering career were filled with uncertainy.

“I landed in aerospace and wasn’t sure what it was going to be like. There were pockets of time where I didn’t like what I was doing, got frustrated, and almost left,” Magarian recalls. “Fast forward a few years, now I’m a manager and I have employees going through the same thing. They’re caught off-guard, and they’re wondering if it’s the right fit and if they should leave.”

Now a third-year graduate student and an engineering leadership instructor with the Gordon-MIT Engineering Leadership (GEL) Program, Magarian has taken a new path that draws on these experiences to help other engineers make their way in the field. He is investigating the job trajectories of engineering graduates and exploring why some choose to be practicing engineers while others head in different directions.

“What really drives me is to better understand the engineering careers landscape and helping people achieve career fit,” Magarian says. “I’m looking at education, the work force, and the students, and trying to understand opportunities for enhancing career fit and satisfaction.”

Magarian first joined MIT as a full-time instructor with GEL. Two years in, faculty members were encouraging him to proceed further with his new passion and pursue a PhD. Magarian was hesitant at first, but he went for it.

“Going back from industry to academia was a very big jump for me. When I was in my 20s, I would have told you I was a career industry person,” Magarian says. “[A PhD is] such an involved, long-term thing, but the hesitation has never been for a lack of passion for the work, never. MIT has been an incredibly supportive place for that. I couldn’t think of another place I would rather be taking this plunge.”

Preparing for the real world

Magarian spends 50 percent of his time working on his research project under the guidance of Warren Seering, the Weber-Shaughness Professor in the Department of Mechanical Engineering. The other half of his time is spent teaching Course 6.912 (Engineering Leadership), which is part of the GEL core curriculum and is paired with a lab component in which students work in groups on exercises and simulations that are similar to what they might face on the job as engineers.

Interest in the course, which teaches students about leadership styles, team building, ethical decision making, advocacy, and conflict management, to name a few topics, has been growing, according to Magarian, who notes that enrollment has been increasing in recent years.

Among its other goals, the course aims to give students a taste of what careers in the engineering industry are really like. “This fairytale version of what engineering is, that engineers make spaceships — it’s too vague. Those descriptions don’t tell you what the day-to-day work life is like,” Magarian says.

When is a job an engineering job?

When Magarian isn’t preparing lectures for class, he’s working on his research, advised by Seering and faculty at the MIT Sloan School of Management. His research centers around two questions. The first is: How should we characterize engineering careers in the 21st century?

There has been a recent explosion in the diversity of job titles and hybrid roles in the professional engineering world, Magarian says. For many of these roles, such as in product management or innovation strategy, for example, there may be variance in how engineering-related these roles are across industry.

“One of the things I still see with students is that some have no problem envisioning a career that involves starting out as an engineer and later becoming a manager. They don’t view that as a career change,” he says. “But then other students are trying to decide whether they want to go into engineering or management. And they view it as a dichotomy.”

These distinctions in how jobs are characterized are important for communicating about and analyzing workforce issues, such as why women make up less than 15 percent of the workers in engineering fields.

“If you’re wondering why more women aren’t going into engineering, and you don’t have a way of saying which jobs are engineering jobs, and if you’re not measuring that consistently across different research studies, you could be introducing some error,” Magarian says.

Thousands of papers in neatly organized folders are sitting on a metal cart behind Magarian’s desk. They hold the responses of over 1,100 seniors majoring in mechanical engineering, from nine universities across the country. Magarian hopes the data within these files will address his second important research question: What are the mechanisms at play that attract some engineering graduates to conventional engineering jobs, draw others to hybrid jobs, and cause still others to leave the field altogether?

Each student that participated in the experiment has provided their internship history and work experience, as well as other information that reflects, for example, their mathematics confidence. Magarian would provide each student with several different job descriptions: Job A might emphasize collaboration, involve a strong mathematics component, be a short-term position, and require working under someone else. Each student then provides a rating of interest for each role. Magarian is trying to understand and control for a factor that he calls “informedness” — the extent to which students are aware of certain key attributes of jobs when they are considering taking a particular role.

“The working hypothesis is that when students graduate, they have a variation in their ‘informedness,’” he says. “What happens when we take that variance out of the picture? What types of students go towards what types of roles?”

For example, Magarian says, the literature claims that math confidence, while important, does not fully determine whether an engineering student will choose a more math-intensive engineering job. However, when Magarian controls the students’ understanding of how much math the job requires, he says you start to see what you might expect. Math-confident students gravitate towards “mathy” jobs — a finding that should be useful for employers who say they have difficulty recruiting the types of students they are looking for.

While teaching or conducting research, Magarian often tries to put himself back in the shoes of the people he’s trying to study. He remembers when he, too, was an engineering graduate unraveling the complexities of finding the right job.

“My priorities at the time were, ‘I want to get everything taken care of. I want to get my student debt paid off. I want to get my job,’” he says. “That’s just who I was at the time. There was comfort in having a decent, respectable offer that met my needs and seemed to be the right thing. So, I can understand why students might jump on offers that are the best fit for them now.”

At the moment, Magarian isn’t sure about where he might fit once he completes his PhD, but he expects to stay somewhere at the nexus of industry, workforce issues, and higher education.

“Being an older grad student has afforded me the opportunity to spend time in the environment that I’m now passionate about researching, which gives me all kinds of ideas about what I want to investigate about that environment,” Magarian says. “So, I actually relish my industry experience, because it fueled my research interests and gave me a legitimate passion for some of the things I want to try to understand or solve.”