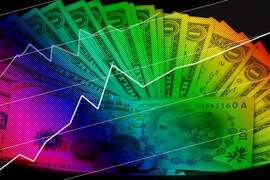 ↓ Download Image
Caption: A new study co-authored by an MIT economist reveals, people have a haphazard approach to assessing inflation. Most citizens only pay attention to the topic intermittently, and overestimate how bad inflation will become.

Caption:
A new study co-authored by an MIT economist reveals that people have a haphazard approach to assessing inflation.
Credits:
Image: Christine Daniloff/MIT

Do you know your country’s current inflation rate? What do you think it will be in the future? And how do you, personally, try to plan your finances accordingly?

Those are important questions for economists and policymakers, because central bankers generally assess future expectations of inflation when setting interest rates. Yet as a new study co-authored by an MIT economist reveals, people have a haphazard approach to assessing inflation. Most citizens only pay attention to the topic intermittently, and they overestimate how bad inflation will become.

Still, there is some good news in these findings, based on research in the U.S. and Argentina, countries that have very different experiences with inflation. Many people are “rationally inattentive” to inflation, as economists put it. That means an occasional focus on the subject may actually help people avoid overreactions to price blips.

“There’s evidence of rational inattention,” says Alberto Cavallo, the Douglas Drane Associate Professor in Information Technology and Management at the MIT Sloan School of Management, and a co-author of the study. “People are paying attention when they need to.”

And now for the bad news.

“People have terrible memories,” Cavallo says. “Even in a place like Argentina, which has so much inflation, where this is so important to correctly estimate, people have no clue what past prices were. They tended to think past prices were much lower than they were, so they thought inflation was much higher than it is.” Overall, Cavallo adds, “There is often an upward bias in inflation expectations.”

The paper, “Inflation Expectations, Learning, and Supermarket Prices,” appears in the newest issue of the American Economic Journal: Macroeconomics. In addition to Cavallo, the authors are Guillermo Cruces of the National University of La Plata, in Argentina, and Ricardo Perez-Truglia of the University of California at Los Angeles.

The study derives its findings from a series of online and offline surveys in both the U.S. and Argentina — in some cases conducted right after people have gone shopping in supermarkets.

The two countries were chosen as sites for the study precisely because of their contrasting inflation histories. The U.S. inflation rate was 1.8 percent over the five years before the study, while in Argentina the inflation rate was 22.5 percent. That helped the scholars to examine what effect the experience of high or low inflation may have.

The study produced multiple results. The researchers found that people in Argentina do tend to have absorbed more information about inflation than people in the U.S. — and as a consequence, they have more firmly entrenched ideas about the subject. For instance, respondents in the survey placed quite different amounts of emphasis on how much that new information would affect their views.

That also fits with the notion on “rational inattention,” since in the U.S., where inflation rates are lower and more stable, people can afford to have accumulated less information about the subject in the past.

“In the U.S., if inflation is 2 or 3 percent, it won’t change dramatically, and you are not affected too much,” Cavallo explains. “In Argentina, knowing what the inflation rate will be in the future is key for your salary. If it’s going to be 30 percent or 15 percent, that question becomes much more important.”

It is also the case that people pay more attention to select prices they personally encounter, not to aggregate inflation statistics, even if the larger data sets may be a better guide to overall prices. Based on a series of questions to consumers, the researchers found that people are willing to give specific supermarket prices more weight in their inflation expectations, compared to the aggregate (but more abstract) data.

“Within each country, we found people react more to the information of individual products,” Cavallo notes.

As Cavallo observes, this could be a defense mechanism deployed by some people, since expectations tend to overshoot actual inflation increases.

“In a country like Argentina with high inflation, it’s better to have an upward bias,” he says. “It’s a protective mechanism to think things are going to be worse than they actually are.”

The current paper is related to an extended series of studies Cavallo and his colleagues have undertaken on inflation. Cavallo and MIT Sloan economist Roberto Rigobon are co-founders of the MIT-based Billion Prices Project, an innovative program launched several years ago that tracks prices in real time, partly as a way of evaluating the accuracy of official inflation statistics.

The current papers bears on the practices of monetary policy — the interest rates set by central banks. The so-called “real” interest rate consumers grapple with is a combination of the listed interest rates of lenders as well as inflation expectations.

If people expect inflation to be higher than interest rates, they will — in theory, at least — be more likely to buy products now, averting future inflation, rather than depositing money at low rates. In turn, that behavior could have significant macroeconomic effects.

Cavallo thinks the current study can help clarify for policymakers how people sort through information and shape their expectations in the first place.

“One policy implication is that governments can provide [people] either better aggregate statistics or better individual examples,” Cavallo says. “I think they should … make sure they communicate clearly to consumers [and] speak about goods that are important. We’re basically seeing how much people learn from the information we give them.”