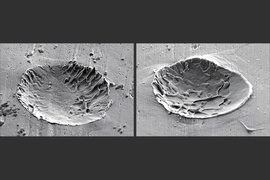 ↓ Download Image
Caption: Micrographs of a metal surface after impact by metal particles. Craters are formed due to melting of the surface from the impact. 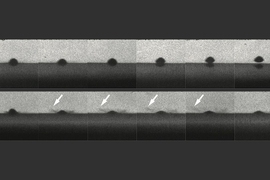 ↓ Download Image
Caption: The top row of photos shows a particle that melts the surface on impact and bounces away without sticking. The bottom row shows a similar particle that does not melt and does stick to the surface. Arrows show impact sprays that look like liquid, but are actually solid particles.

Caption:
Micrographs of a metal surface after impact by metal particles. Craters are formed due to melting of the surface from the impact.

Caption:
The top row of photos shows a particle that melts the surface on impact and bounces away without sticking. The bottom row shows a similar particle that does not melt and does stick to the surface. Arrows show impact sprays that look like liquid, but are actually solid particles.

When bonding two pieces of metal, either the metals must melt a bit where they meet or some molten metal must be introduced between the pieces. A solid bond then forms when the metal solidifies again. But researchers at MIT have found that in some situations, melting can actually inhibit metal bonding rather than promote it.

The surprising and counterintuitive finding could have serious implications for the design of certain coating processes or for 3-D printing, which both require getting materials to stick together and stay that way.

The research, carried out by postdocs Mostafa Hassani-Gangaraj and David Veysset and professors Keith Nelson and Christopher Schuh, was reported in two papers, in the journals Physical Review Letters and Scripta Materialia.

Schuh, who is the Danae and Vasilis Salapatas Professor of Metallurgy and head of the Department of Materials Science and Engineering, explains that one of the papers outlines “a revolutionary advance in the technology” for observing extremely high-speed interactions, while the other makes use of that high-speed imaging to reveal that melting induced by impacting particles of metal can impede bonding.

The optical setup, with a high-speed camera that uses 16 separate charged-coupled device (CCD) imaging chips and can record images in just 3 nanoseconds, was primarily developed by Veysset. The camera is so fast that it can track individual particles being sprayed onto a surface at supersonic velocities, a feat that was previously not possible. The team used this camera, which can shoot up to 300 million frames per second, to observe a spray-painting-like process similar to ones used to apply a metallic coating to surfaces in many industries.

While such processes are widely used, until now their characteristics have been determined empirically, since the process itself is so fast “you can’t see it, you can’t tell what’s happening, and no one has ever been able to watch the moment when a particle impacts and sticks,” Schuh says. As a result, there has been ongoing controversy about whether the metal particles actually melt as they strike the surface to be coated. The new technology means that now the researchers “can watch what’s happening, can study it, and can do science,” he says.

The new images make it clear that under some conditions, the particles of metal being sprayed at a surface really do melt the surface — and that, unexpectedly, prevents them from sticking. The researchers found that the particles bounce away in much less time than it takes for the surface to resolidify, so they leave the surface that is still molten.

If engineers find that a coating material isn’t bonding well, they may be inclined to increase the spray velocity or temperature in order to increase the chances of melting. However, the new results show the opposite: Melting should be avoided.

It turns out the best bonding happens when the impacting particles and impacted surfaces remain in a solid state but “splash” outward in a way that looks like liquid. It was “an eye-opening observation,” according to Schuh. That phenomenon “is found in a variety of these metal-processing methods,” he says. Now, it is clear that “to stick metal to metal, we need to make a splash without liquid. A solid splash sticks, and a liquid one doesn’t.” With the new ability to observe the process, Hassani-Gangaraj says, “by precise measurements, we could find the conditions needed to induce that bond.”

The findings could be relevant for processes used to coat engine components in order to reuse worn parts rather than relegating them to the scrap-metal bin. “With an old engine from a large earth-moving machine, it costs a fortune to throw it away, and it costs a fortune to melt and recast it,” Schuh says. “Instead, you can clean it off and use a spray process to renew the surface.” But that requires that the sprayed coating will remain securely bonded.

In addition to coatings, the new information could also help in the design of some metal-based additive manufacturing systems, known as 3-D printing. There, as with coatings, it is critical to make sure that one layer of the printing material adheres solidly to the previous layer.

“What this work promises is an accurate and mathematical approach” to determining the optimal conditions to ensure a solid bond, Schuh says. “It’s mathematical rather than empirical.”

The work was supported by the U.S. Army through MIT’s Institute for Soldier Nanotechnologies, the U.S. Army Research Office, and the U.S. Office of Naval Research.

How to prevent metal embrittlement

Schuh appointed head of the Department of Materials Science and Engineering