High-temperature devices made from films that bend as they “breathe” 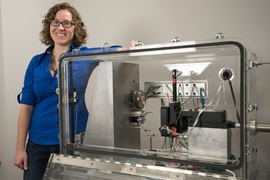 ↓ Download Image
Caption: “The most interesting thing about these materials is they function at temperatures above 500 degrees Celsius,” says MIT graduate student Jessica Swallow, pictured with the equipment used for testing the new materials. 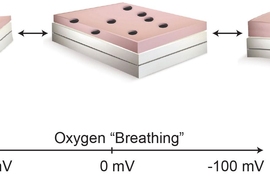 ↓ Download Image
Caption: This diagram illustrates how the thin-film material bends from its normal flat state (center) as oxygen is taken up by its structure (right) or released (left). This behavior enables the film’s shape to be controlled remotely by changing its electric charge.

Caption:
“The most interesting thing about these materials is they function at temperatures above 500 degrees Celsius,” says MIT graduate student Jessica Swallow, pictured with the equipment used for testing the new materials.
Credits:
Courtesy of the researchers

Caption:
This diagram illustrates how the thin-film material bends from its normal flat state (center) as oxygen is taken up by its structure (right) or released (left). This behavior enables the film’s shape to be controlled remotely by changing its electric charge.
Credits:
Courtesy of the researchers

Carrying out maintenance tasks inside a nuclear plant puts severe strains on equipment, due to extreme temperatures that are hard for components to endure without degrading. Now, researchers at MIT and elsewhere have come up with a radically new way to make actuators that could be used in such extremely hot environments.

Such expansion and contraction can be a major issue affecting the usable lifetime of a battery or fuel cell, as the repeated changes in volume can cause cracks to form, potentially leading to short-circuits or degraded performance. But for high-temperature actuators, these volume changes are a desired result rather than an unwelcome side effect.

The findings are described in a report appearing this week in the journal Nature Materials, by Jessica Swallow, an MIT graduate student; Krystyn Van Vliet, the Michael (1949) and Sonja Koerner Professor of Materials Science and Engineering; Harry Tuller, professor of materials science and engineering; and five others.

“The most interesting thing about these materials is that they function at temperatures above 500 degrees Celsius,” Swallow explains. That suggests that their predictable bending motions could be harnessed, for example, for maintenance robotics inside a nuclear reactor, or actuators inside jet engines or spacecraft engines.

By coupling these oxide materials with other materials whose dimensions remain constant, it is possible to make actuators that bend when the oxide expands or contracts. This action is similar to the way bimetallic strips work in thermostats, where heating causes one metal to expand more than another that is bonded to it, leading the bonded strip to bend. For these tests, the researchers used a compound dubbed PCO, for praseodymium-doped cerium oxide.

Conventional materials used to create motion by applying electricity, such as piezoelectric devices, don’t work nearly as well at such high temperatures, so the new system could open up a new area of high-temperature sensors and actuators. Such devices could be used, for example, to open and close valves in these hot environments, the researchers say.

Van Vliet says the finding was made possible as a result of a high-resolution, probe-based mechanical measurement system for high-temperature conditions that she and her co-workers have developed over the years. The system provides “precision measurements of material motion that here relate directly to oxygen levels,” she says, enabling researchers to measure exactly how the oxygen is cycling in and out of the metal oxide.

To make these measurements, scientists begin by depositing a thin layer of metal oxide on a substrate, then use the detection system, which can measure small displacements on a scale of nanometers, or billionths of a meter. “These materials are special,” she says, “because they ‘breathe’ oxygen in and out, and change volume, and that causes the substrate to bend.”

While they demonstrated the process using one particular oxide compound, the researchers say the findings could apply broadly to a variety of oxide materials, and even to other kinds of ions in addition to oxygen, moving in and out of the oxide layer.

These findings “are highly significant, since they demonstrate and explain the chemical expansion of thin films at high temperatures,” says Holger Fritze, a professor at the

Clausthal University of Technology in Germany, who was not involved in this work. “Such systems show large strain in comparison to other high-temperature stable materials, thereby enabling new applications including high-temperature actuators,” he says.

“The approach used here is very novel,” says Brian Sheldon, a professor of engineering at Brown University, who also was not involved in this research. “As the authors have pointed out, this approach can provide information that differs from that obtained with other methods that are employed to investigate chemical expansion.”

This work has two important features, Sheldon says: It provides important basic information about the chemical expansion of such materials, and it opens the possibility of new kinds of high-temperature actuators. “I think that both are very important accomplishments,” he says.