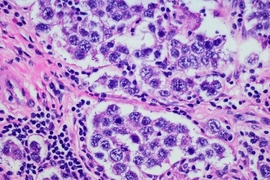 ↓ Download Image
Caption: MIT researchers are working on an implantable device that could make intraperitoneal chemotherapy more bearable. “As we entered into this project, our question was how do we get the same beneficial outcomes and reduce all the side effects?” says professor Michael Cima. Pictured is a micrograph of ovarian cancer.

Caption:
MIT researchers are working on an implantable device that could make intraperitoneal chemotherapy more bearable. “As we entered into this project, our question was how do we get the same beneficial outcomes and reduce all the side effects?” says professor Michael Cima. Pictured is a micrograph of ovarian cancer.

Most women diagnosed with ovarian cancer undergo surgery to remove as many of the tumors as possible. However, it is usually impossible to eliminate all of the cancer cells because they have spread throughout the abdomen. Surgery is therefore followed by 18 weeks of chemotherapy.

Delivering chemotherapy drugs directly to the abdomen through a catheter offers better results than other methods, but this regimen suffers from significant complications, and many patients are unable to complete it.

MIT researchers who are working on an implantable device that could make intraperitoneal chemotherapy more bearable have published a new study that offers insight into how to improve chemotherapy strategies for ovarian cancer, and how to determine which patients would be most likely to benefit from this device.

“As we entered into this project, our question was how do we get the same beneficial outcomes and reduce all the side effects?” says Michael Cima, the David H. Koch Professor of Engineering in the Department of Materials Science and Engineering, a member of MIT’s Koch Institute for Integrative Cancer Research, and the senior author of the study.

The findings suggest that the outcome of initial surgery plays a key role in the effectiveness of subsequent intraperitoneal chemotherapy. Cisplatin, one of the most commonly used drugs, effectively treats very tiny tumor cell clusters when it is delivered continuously or as a single large dose. But the researchers found that for larger tumor cell clusters, continuous delivery of cisplatin, at higher doses than are tolerable with the current periodic chemotherapy method, was more effective. The device they are developing would make delivery of such higher, continuous doses possible.

Laura Tanenbaum, who recently received her PhD from the Harvard-MIT Program in Health Sciences and Technology (HST), and HST PhD student Aikaterini Mantzavinou are the lead authors of the paper, which appears in the journal Gynecologic Oncology. Other authors are HST PhD student Kriti Subramanyam and Massachusetts General Hospital gynecologic oncologist Marcela del Carmen.

Ovarian cancer is usually not detected until the cancer has reached an advanced stage, with metastases covering organs throughout the peritoneal cavity, including the liver, bladder, and intestines. After surgery, known as “tumor debulking,” patients receive two types of chemotherapy to treat tumors left behind: intravenous delivery of paclitaxel and intravenous or intraperitoneal delivery of a platinum drug such as cisplatin.

Intraperitoneal chemotherapy is pumped directly into the abdomen through a catheter every three weeks for a total of six cycles. This allows cisplatin to come in direct contact with the residual tumors, which has been shown to be more effective than intravenous delivery but is not tolerable for many patients. “It’s painful and the catheter can be a site of local infections,” Cima says.

Several years ago, Cima and colleagues set out to develop an implantable device that could deliver cisplatin into the abdomen without all of the side effects produced by the catheter and the large, repeated cisplatin doses. As this project was neither traditional clinical research nor fundamental scientific research, enabling support came from the Koch Institute’s Frontier Research Program and then later on, the Bridge Project, a partnership between MIT’s Koch Institute and the Dana-Farber/Harvard Cancer Center.

Their device is made of a drug-loaded polymer that could be inserted at the beginning of treatment and remain in place for the full treatment course, then removed with minimally invasive surgery. The researchers have tested proof-of-concept devices in mice and are now developing a version that could be tested in humans, though more animal studies are needed before human trials can begin.

In their new study, the researchers set out to investigate how the size of the residual tumors would affect their response to continuous, low-dose cisplatin delivery. They believed that size would play some role because once tumors reach a certain size, the drug may not be able to penetrate all the way into the inner core of the tumors.

To test this hypothesis, the researchers grew spherical ovarian cancer cell clusters 100 or 200 microns in diameter in a lab dish and exposed them to varying doses of cisplatin. Continuous, low-dose cisplatin delivery, similar to what tumors would receive from an implanted device, was as effective against 100-micron tumor spheroids as a single high dose, similar to that delivered by a catheter.

However, by increasing the continuous cisplatin dose, the researchers found that they could treat the larger 200-micron spheroids more effectively than they could with the single high dose. This increased dose could be delivered using an implantable device, but it would not be tolerable for patients if given through an abdominal catheter.

Cima believes that the findings may also help to explain some of the preliminary results of a recent, large clinical trial in which doctors found that intraperitoneal cisplatin delivery was no more effective than intravenous chemotherapy alone. This contradicted previous findings from smaller studies, indicating that cisplatin delivery by catheter improved patient survival.

In the newer trial, conducted at about 500 treatment centers, surgeons admitted patients to the study based on size estimates of the tumors remaining after surgery. However, Cima says, this subjective evaluation may have resulted in patients entering the study whose tumors were too large to be helped by the current intraperitoneal therapy.

This points to the importance of both developing a good method for screening patients before future trials begin, to make sure they are likely to benefit from the treatment, and devising new strategies to help surgeons remove as many tumors as possible, Cima says.