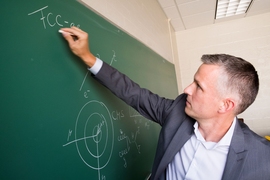 ↓ Download Image
Caption: “[MIT] is a fantastic place,” says associate professor Markus Klute, a member of the Laboratory of Nuclear Science. “Where else in the world do you get this amount of freedom?” 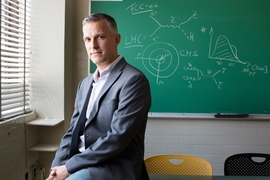 ↓ Download Image
Caption: “[MIT] is a fantastic place,” says associate professor Markus Klute, a member of the Laboratory of Nuclear Science. “Where else in the world do you get this amount of freedom?”

Caption:
“[MIT] is a fantastic place,” says associate professor Markus Klute, a member of the Laboratory of Nuclear Science. “Where else in the world do you get this amount of freedom?”

On March 30, 2010, physicists and reporters packed into the two main control rooms at CERN’s Large Hadron Collider (LHC) in Geneva, Switzerland, waiting for a first signal from the world’s largest particle accelerator.

The underground collider, comprising a 17-mile-long circular tunnel lined with superconducting magnets, was designed to accelerate and smash together subatomic particles at close to the speed of light, in hopes of producing the elusive Higgs boson — the fundamental particle thought to give mass to elementary particles.

It was a memorable day for many, and particularly for Markus Klute, who at the time was an assistant professor at MIT. He was based in Geneva to oversee the operation of the computing system for the CMS (Compact Muon Solenoid), one of the LHC’s two main particle detectors. Klute was monitoring the detector for the first signs of particle collisions.

“I remember this day very precisely,” Klute recalls. “There was pressure built up, and we needed to make sure everything was working right.”

The room erupted in cheers as the particle accelerator produced its first collisions, at record-high energies, marking the start of an experimental run that was hoped to reveal the Higgs boson, or perhaps even new phenomena outside the standard rules of physics.

As scientists popped bottles of champagne, however, Klute was headed out the door. His wife, who was nine months pregnant, had called just before the key moment of discovery, to tell him their son had jumped off the couch and broken his shoulder.

Fortunately, approximately two years later, Klute was able to take part in the next celebration. He and the hundreds of scientists at CERN confirmed for the first time the detection of a Higgs-like particle.

“We were all extremely relieved, and then as a scientist I think you always have to doubt yourself: Did we make a mistake? Is there something not quite right here?” Klute says. “But there was no doubt.”

Klute credits MIT for his front-seat role in the discovery of the Higgs boson. From his time as a postdoc to his current position as a tenured faculty member, he says MIT has given him leeway to pursue his interests. As a faculty member, he was able to go after the elusive particle at CERN, halfway around the world.

“[MIT] is a fantastic place,” says Klute, now an associate professor and member of the Laboratory of Nuclear Science. “Where else in the world do you get this amount of freedom?”

Klute was born in Dusseldorf, Germany, and grew up in Kemmenau, a small village in the western part of the country. His childhood was spent playing soccer, handball, and tennis with his friends, and paying little attention to schooling, until high school, when he started taking an interest in math and physics.

When a science teacher took his class to visit a museum in Munich, Klute was drawn to an exhibit of a cloud chamber — a rudimentary particle detector used for detecting and visualizing ionizing radiation.

“I thought it might be nice to have this in our school, so we built one, and it almost worked. We used this to learn about the physics and techniques involved in order to make particles visible,” Klute says. “From there, it was a no-brainer for me to study physics, in the direction of particle and nuclear physics.”

After graduation, Klute enrolled in the University of Bonn, where he took up physics as a concentration. He intended to take the introductory course in particle physics, but the class was held in the morning, too early for his tastes. Instead he bought the course book and read it cover to cover.

In 1995, as an undergraduate, he followed closely the discovery that year of the top quark, the most massive elementary particle, which had been detected by Fermilab’s Tevatron, at the time the world’s highest-energy particle collider.

“I found this extremely fascinating, this kind of approach to science where you can make a prediction and confirm it with an experiment, or vice versa,” Klute says. “This really resonated with me.”

Klute stayed on at the University of Bonn to pursue a PhD in physics, mostly for the opportunity to work at the Tevatron, in Batavia, Illinois. As a second-year graduate student, he worked as part of the team overseeing the DZero detector, one of the Tevatron’s two detectors, which scientists used to detect proton collisions and potentially identify new particles.

Klute was placed in charge of operating DZero’s silicon detector, which was designed to make the closest, most precise measurements of a particle collision. At the time, scientists couldn’t quite get DZero to work. For Klute, this presented a valuable experimental opportunity.

“As a second-year graduate student, I was being put in charge of this silicon detector, and I really felt responsible. I went overboard in trying to get this thing to work,” Klute says.  “I remember in the middle of the night, taking a toothbrush and cleaning a circuit board, because somebody the year before did a bad soldering job. It was wild. And for me, it was really important to learn on a system which didn’t work, to appreciate how things should work.”

As he was finishing up his PhD in Bonn, Klute received an offer in 2004 from MIT to continue his work as a postdoc at Fermilab, this time as part of the team overseeing the Tevatron’s other major detector, CDF (Collider Detector at Fermilab). While there, he worked with Bruce Knuteson, a former MIT professor of physics, and Christoph Paus, also an MIT physics professor, to upgrade the detector’s data acquisition system.

After two years, Paus made plans to move his research group from Fermilab to CERN, to focus on the LHC’s CMS detector and the ultimate goal: to find the Higgs boson. Paus offered to bring Klute along as an MIT research scientist. In Geneva, the team applied their expertise to upgrade the CMS computing system, developing methods to store, reconstruct, and distribute the data. This was no trivial task, as, once the detectors were up and running, the system would have to process around 1,000 events, or particle collisions, per second.

In 2008, a year after scientists had installed the apartment-sized CMS detector into the LHC’s tunnel system, Klute accepted a tenured faculty position at the University of Göttingen. But after a year there, Klute found that the teaching load overtook his research. By serendipity, Paus called with another offer, this time for a junior faculty position in MIT’s physics department.

“I knew MIT, and I knew I would be working with MIT-quality students, and they are the ones who have to crank the numbers and read the histograms,” Klute says. “So I said, OK, I want to discover the Higgs boson. Let’s do it. Sometimes you have to be a little crazy.”

Beyond the Standard Model

After the LHC’s much-anticipated first particle-collision detections in 2010, the collider continued to run for another year and a half, continuously collecting data as billions upon billions of protons whirled around the tunnels, smashing into each other at each of the LHC’s four detector sites, including the CMS. As winter approached in 2011, Klute recalls that the data run “ended with a cliffhanger.”

“We would look at this data, and it seemed like there was something, but we weren’t quite sure, and we had to stop for winter break,” Klute says. “Power is very expensive in France because people heat with electricity, and CERN has an agreement that it won’t operate the LHC in the winter.”

The following March, as soon as winter thawed, the LHC was back up and running, and with more data, the scientists were able to confirm within weeks that they had indeed observed signs of a Higgs-like particle — an announcement that they made to the world on July 4, 2012.

For Klute, the discovery spurred a quest for more knowledge, specifically about particles or phenomena such as dark matter that, unlike the Higgs boson, do not obey the conventional rules of physics, known as the Standard Model. In addition to carrying out his work at CERN today, Klute is part of an international collaboration that is drawing up a proposal for a next-generation particle accelerator, called FCC, for Future Circular Collider.

“We thought, why not build a larger, 100-kilometer tunnel, and run it at higher energies, with magnet technology of tomorrow,” Klute says. “Going to higher energies, we can try to answer this really deep question of how does the universe work? Is there some sort of new form of matter that governs the universe? If so, it had to have been produced after the Big Bang, which means it somehow has to interact with standard matter, and if it does, we should be able to produce it. And that is what we want to do with our experiments.”