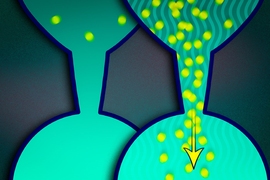 ↓ Download Image
Caption: When electrons travelling individually pass through a constricted opening, they will bounce off the walls at either side, losing their momentum as well as some of their energy. But when the electrons travel in dense groups, they are much more likely to bounce off each other than the walls, and travel quickly.

Caption:
When electrons travelling individually pass through a constricted opening, they will bounce off the walls at either side, losing their momentum as well as some of their energy. But when the electrons travel in dense groups, they are much more likely to bounce off each other than the walls, and travel quickly.

When many people try to squeeze through a passageway at the same time, it creates a bottleneck that slows everyone down. It turns out the reverse is true for electrons, which can move through small openings more quickly when travelling in large groups than when flying solo.

The theory of so-called superballistic flow predicts that electrons can pass more easily through constrictions by interacting with one another, and thereby “cooperating,” than they can individually. The theory was proposed in a paper earlier this year by a team led by MIT professor of physics Leonid Levitov.

Now, in a paper published this week in the journal Nature Physics, a team at the University of Manchester in the U.K., working alongside Levitov and MIT undergraduate Haoyu Guo, have confirmed the theory in an experiment employing devices built from an atomically thin layer of graphene.

The idea behind superballistic flow is that interactions among electrons make them move in a highly coordinated manner, mimicking the behavior of particles in highly viscous fluids.

When electrons traveling individually pass through a constricted opening, they will bounce off the walls at either side, losing their momentum as well as some of their energy.

But when the electrons travel in dense groups, they are much more likely to bounce off each other than the walls. Such electron-electron collisions are known as “lossless,” since the total energy and the net momentum of the two particles are conserved. The momentum of individual electrons can change rapidly in the process, however the overall momentum conservation ensures that the losses are very low.

As a result, together the electrons are able to travel more quickly, and pass through the constriction more easily, than they would alone.

“Viscous flows of electrons have been anticipated in theory but never observed, partly because the materials were not good enough at the time, and partly because there were no good proposals of what to look for,” Levitov says.

To make viscous flow easier to identify, Levitov’s theoretical paper suggested forcing electrons to travel through a constriction, generating an electric current. This is a similar idea to the way in which 19th century researchers studied viscosity by passing fluids through a narrow channel.

“If you run current through a constriction, and the conditions are right and the flow is viscous … the resistance of that flow will be anomalously low, namely lower than that expected for free particle flow,” Levitov says.

This drop in resistance can be measured, revealing the presence of viscous flow.

Using the experimental set-up described theoretically in Levitov’s previous paper, the Manchester researchers, led by professor of physics and Nobel laureate Andre Geim, carefully etched a series of constrictions, or pinch points, within pieces of graphene encapsulated between boron-nitride crystals.

“The team etched the graphene sheets into a shape where they formed several constrictions, arranged in sequence, and they then applied a current such that it flowed through all of these constrictions one by one,” Levitov says.

The researchers then measured the drop in electric potential over each constriction independently, allowing them to detect the flow rate through each pinch point in the device.

They found that the conductance of the electrons exceeded the maximum conductance possible for free electrons, known as Landauer’s ballistic limit.

They also found that the conductance of the electrons increased with a rise in temperature.

In this way the researchers were able to verify Levitov and Guo’s original predictions within just a few days. Levitov says this is probably the fastest experimental confirmation of one of his predictions in his entire career, with the longest taking around 20 years to prove.

To confirm their findings, the researchers then repeated the experiment with a range of different graphene devices, and obtained the same results.

The work points toward the possibility of using interactions among electrons to design low-power electronics, Levitov says.

But more fundamentally, he says, it opens up new territory in our understanding of charge flow physics, in which electrons behave in a collective manner.

Electron-electron interactions have been responsible for a huge variety of novel and exciting physics, but the effects of these interactions typically become stronger as the temperature is reduced, says Amir Yacoby, a professor of physics at Harvard University, who was not involved in the research.

“The hydrodynamic electron flow regime is yet another incredibly rich manifestation of electron-electron interactions, and this time it grows with increasing temperature,” Yacoby says.

This suggests that some of these effects might become more accessible to observation than ever before.

“The particular phenomena described in the theory and experiment are a beautiful example of a new regime of conductance that has not been explored before,” he says.

Levitov and his team are now investigating the implications of these findings. In particular they plan to study heat transport within the new fluid mechanics regime.

“It looks like heat transport in this new regime is also very surprising, and more interesting than we initially thought,” he says. “This fluid mechanics regime could possibly be used to control heat flow in electronic systems in new ways.”