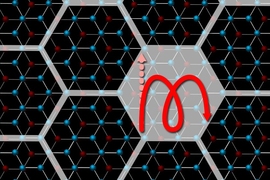 When moving through a conductive material in an electric field, electrons tend to follow the path of least resistance — which runs in the direction of that field.

But now physicists at MIT and the University of Manchester have found an unexpectedly different behavior under very specialized conditions — one that might lead to new types of transistors and electronic circuits that could prove highly energy-efficient.

They’ve found that when a sheet of graphene — a two-dimensional array of pure carbon — is placed atop another two-dimensional material, electrons instead move sideways, perpendicular to the electric field. This happens even without the influence of a magnetic field — the only other known way of inducing such a sideways flow.

What’s more, two separate streams of electrons would flow in opposite directions, both crosswise to the field, canceling out each other’s electrical charge to produce a “neutral, chargeless current,” explains Leonid Levitov, an MIT professor of physics and a senior author of a paper describing these findings this week in the journal Science.

The exact angle of this current relative to the electric field can be precisely controlled, Levitov says. He compares it to a sailboat sailing perpendicular to the wind, its angle of motion controlled by adjusting the position of the sail.

Levitov and co-author Andre Geim at Manchester say this flow could be altered by applying a minute voltage on the gate, allowing the material to function as a transistor. Currents in these materials, being neutral, might not waste much of their energy as heat, as occurs in conventional semiconductors — potentially making the new materials a more efficient basis for computer chips.

“It is widely believed that new, unconventional approaches to information processing are key for the future of hardware,” Levitov says. “This belief has been the driving force behind a number of important recent developments, in particular spintronics” — in which the spin of electrons, not their electric charge, carries information.

The MIT and Manchester researchers have demonstrated a simple transistor based on the new material, Levitov says.

“It is quite a fascinating effect, and it hits a very soft spot in our understanding of complex, so-called topological materials,” Geim says. “It is very rare to come across a phenomenon that bridges materials science, particle physics, relativity, and topology.”

In their experiments, Levitov, Geim, and their colleagues overlaid the graphene on a layer of boron nitride — a two-dimensional material that forms a hexagonal lattice structure, as graphene does. Together, the two materials form a superlattice that behaves as a semiconductor.

This superlattice causes electrons to acquire an unexpected twist — which Levitov describes as “a built-in vorticity” — that changes their direction of motion, much as the spin of a ball can curve its trajectory.

Electrons in graphene behave like massless relativistic particles. The observed effect, however, has no known analog in particle physics, and extends our understanding of how the universe works, the researchers say.

Whether or not this effect can be harnessed to reduce the energy used by computer chips remains an open question, Levitov concedes. This is an early finding, and while there is clearly an opportunity to reduce energy loss to heat locally, other parts of such a system may counterbalance those gains. “This is a fascinating question that remains to be resolved,” Levitov says.

Francisco Guinea, a research professor at Spain’s Instituto de Ciencia de Materiales de Madrid, who was not connected with this research, calls the approach taken by this team “novel and imaginative. … The characterization of these currents in graphene is a very important advance in the understanding of two-dimensional materials.”

The work has great potential, Guinea adds, because “two-dimensional materials with special topological properties are the basis of new technologies for the manipulation of quantum information.”

In addition to Levitov and Geim, the research team included Roman Gorbachev, a research fellow at Manchester; Justin Song, a graduate student at MIT who is now at Caltech; Geliang Yu, a graduate student at Manchester; Freddie Withers, Yang Cao, and Artem Mishchenko, who are postdocs at Manchester; and Manchester professors Irina Grigorieva and Konstantin Novoselov. The work was supported by the European Research Council, the Royal Society, the National Science Foundation, the Office of Naval Research, and the Air Force Office of Scientific Research.