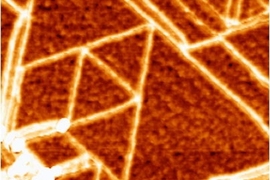 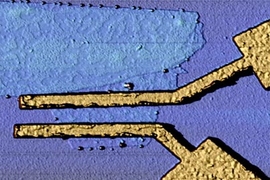 Caption:
The crystallographic structure of a sheet of graphene is revealed in this Atomic Force Microscope picture.
Credits:
Image courtesy / Jarillo-Herrero group

In a blown-up image from a scanning tunneling microscope, it looks just like an endless sheet of chicken wire: a simple flat sheet made up of a lattice of hexagons. But this nanoscopic material called graphene, first generally acknowledged to exist just five years ago, turns out to have a variety of unique, and potentially very useful, characteristics — ones several MIT researchers are actively trying to better understand and turn into real-world applications.

Graphene, a form of the element carbon that is just a single atom thick, had been identified as a theoretical possibility as early as 1947. Even as Institute Professor Mildred Dresselhaus, her physicist husband Gene, and others were working in the 1960s with multiple layers of graphene, many scientists were saying that such an ultra-thin sheet of matter could never be found or even made. "It was very controversial; there were many people who were skeptical," about the research, she says.

Now that it has been found, with widely publicized results published in 2004 by researchers at the University of Manchester, UK, "the topic has exploded," she says. Researchers are focusing on how to harness its properties, and trying to find ways to produce it in sufficient quantity for extensive research and eventually for commercial applications. MIT has become a major center of work on this hot topic, with several different research groups pursuing various aspects — including physical, chemical, electronic and engineering — of the novel material.

While many universities and commercial laboratories are pursuing research on graphene's basic properties or on potential applications, MIT is unusual in having faculty members involved in so many different aspects of graphene research and working collaboratively on these projects, says Tomas Palacios, an assistant professor of electrical engineering and computer science and a leader of one of MIT's research groups exploring graphene's possible electronic applications.

A successor to silicon?

Eight MIT researchers, along with colleagues at Harvard and Boston University, have just received a major U.S. Department of Defense grant for graphene research. With this five-year grant, Palacios says, MIT and its collaborators "would become one of the strongest multidisciplinary teams working on graphene in the world."

But that's only one of the material's potential applications. Because of its single-atom thickness, pure graphene is transparent, and can be used to make transparent electrodes for light-based applications such as light-emitting diodes (LEDs) or improved solar cells. The potential solar cell applications are now being studied by some MIT researchers including Associate Professor of Electrical Engineering Vladimir Bulovic and Associate Dean of Engineering for Research Karen Gleason.

Graphene could also substitute for copper to make the electrical connections between computer chips and other electronic devices, providing much lower resistance and thus generating less heat. And it also has potential uses in quantum-based electronic devices that could enable a new generation of computation and processing.

"The field is really in its infancy," says Michael Strano, associate professor of chemical engineering who has been investigating the chemical properties of graphene. "I don't think there's any other material like this."

The mobility of electrons in graphene — a measure of how easily electrons can flow within it — is by far the highest of any known material. So is its strength, which is, pound for pound, 200 times that of steel. Yet like its cousin diamond, it is a remarkably simple material, composed of nothing but carbon atoms arranged in a simple, regular pattern.

"It's the most extreme material you can think of," says Palacios. "For many years, people thought it was an impossible material that couldn't exist in nature, but people have been studying it from a theoretical point of view for more than 60 years."

Palacios and his team just last month published new results showing that graphene can be used to make frequency multipliers that could enable much faster computer chips and communications devices.

As early as 1981, a review article on graphene by the Dresselhauses, as well as numerous peer-reviewed papers on the subject, described the electrical and mechanical properties of graphene layers. "We weren't exactly looking for single isolated layers at that time," says Mildred Dresselhaus; rather, they were working with multiple graphene layers sandwiched between layers containing other molecules.

"These materials obviously had different properties, different from anything else," Dresselhaus says. "That's what excited us."

When she started working in 1961 on the properties of carbon and its many forms of atomic arrangements, it was not a popular subject for research, Dresselhaus recalls. "There were probably 10 people in the world" doing such research in the 1960s, she says. "Now there are thousands." At the American Physical Society annual meeting last month, she says, there were more sessions devoted to graphene and related carbon research than any other subject. "This is by far the most popular topic" in physics today, she says.

Another team studying graphene at MIT is led by Pablo Jarillo-Herrero, an assistant professor of physics, who is studying its basic physical properties and using graphene's unique behavior as a way to study fundamental quantum-mechanical effects. For example, in graphene, electrons behave as if they were massless particles propagating according to the laws of relativistic quantum mechanics, a behavior that is normally reserved to particles traveling near the speed of light in accelerators or in the cosmos. Such behavior is at the heart of the ultra-high mobilities exhibited by graphene devices.

Jarillo-Herrero says that because the material is so new and its fundamental properties still being discovered, "we have some applications in mind, but many totally new ones will for sure come up as we continue doing research."

Carbon atoms have a propensity to bind very strongly to each other, as well as to other kinds of atoms. The molecular bonds they form are easy to make and very hard to break. That's what gives carbon molecules and crystals their unrivaled strength.

Graphite, the material of ordinary pencil lead, is essentially a jumbled mass of tiny scraps of graphene. The trick that enabled the first demonstrations of the existence of graphene as a real separate material came when researchers at the University of Manchester applied sticky tape to a block of graphite and then carefully peeled off tiny fragments of graphene and placed them on the smooth surface of another material.

That method is sufficient for scientific research. "For the physicists, that's all they need," says Strano. "They don't care if they go to a lot of effort to make five tiny pieces, they can study those for years." But when it comes to possible commercial applications, it's essential to find ways of producing the material in greater quantities.

One of the MIT research teams, led by Jing Kong, the ITT Career Development Associate Professor of Electrical Engineering, is working on developing such methods. In preliminary work, they have created sheets of graphene by chemical vapor deposition, a technique that they hope can be developed to make larger quantities of the material.

Kong's method uses equipment that is "very compatible to conventional semiconductor processing." The method "is quite straightforward, and not too expensive," she says, which could help to enable commercial applications. For specialized functions such as computer chips, further research will be needed to improve the quality and uniformity of the graphene sheets, she says, but for other applications such as solar-cell electrodes, the existing process allows the researchers to start the investigation.

Dresselhaus is a bit more cautious about making graphene sheets suitable for commercial applications for the next generation of electronics. "Incorporating them into something useful for society is already underway, but to provide the next generation of semiconductor electronics, that's really a decade away," she says. The widespread excitement about graphene "is well-deserved," she says, though it remains to be seen what applications will prove to be practical or affordable. "It has very exceptional properties, and it's simple. It's strong, it's light, and it's relatively inexpensive. I've always liked it."

A version of this article appeared in MIT Tech Talk on May 6, 2009 (download PDF).