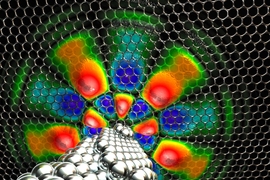 Researchers have succeeded in creating a new “whispering gallery” effect for electrons in a sheet of graphene — making it possible to precisely control a region that reflects electrons within the material. They say the accomplishment could provide a basic building block for new kinds of electronic lenses, as well as quantum-based devices that combine electronics and optics.

The new system uses a needle-like probe that forms the basis of present-day scanning tunneling microscopes (STM), enabling control of both the location and the size of the reflecting region within graphene — a two-dimensional form of carbon that is just one atom thick.

The new finding is described in a paper appearing in the journal Science, co-authored by MIT professor of physics Leonid Levitov and researchers at the National Institute of Standards and Technology (NIST), the University of Maryland, Imperial College London, and the National Institute for Materials Science (NIMS) in Tsukuba, Japan.

When the sharp tip of the STM is poised over a sheet of graphene, it produces a circular barrier on the sheet that “acts as a perfect curved mirror” for electrons, Levitov says, reflecting them along the curved surface until they begin to interfere with themselves. This controllable reflectivity and interference is similar, he adds, to so-called “whispering gallery” confinement modes that have been used in optical and acoustic systems — but these have not been tunable or adjustable.

“In optics, whispering gallery resonators are known and useful,” Levitov says. “They provide high-quality cavities that find applications in sensing, spectroscopy, and communications. But the usual problem in optics is they’re not tunable.” Similarly, previous attempts to create quantum “corrals” for electrons have used atoms precisely positioned on a surface, which cannot be reconfigured easily.

The confinement in this case is produced by the boundary between two different regions on the graphene surface, corresponding to the “p” and “n” regions in a transistor. In this case, a circular region just beneath the STM tip takes on one polarity, and the surrounding region the opposite polarity, creating a controllable circular junction between the two regions. Electrons inside sheets of graphene behave like particles of light; in this case, the circular junction acts as a curved mirror that can focus and control the electrons.

It’s too early to predict what specific uses might be found for this phenomenon, Levitov says, but adds, “Any resonator can be used for a variety of things.”

This electron resonator combines several good features. There’s clearly something special about having tunability and also high quality at the same time.”

Philip Kim, a professor of physics at Harvard University who was not connected with this research, says it is “a very notable example of demonstrating novel electronic properties of graphene.” He adds, “Electrons in graphene behave like photons confined in a two-dimensional atomic sheet. This work unambiguously demonstrates that electrons confined in the potential created by scanning probe microscope exhibit a wave like resonance behavior, known as whispering gallery mode.”

Because the new system is based on well-established STM technology, it could be developed relatively quickly into usable devices, Levitov suggests. And conveniently, the STM not only creates the whispering gallery effect, but also provides a means of observing the results, to study the phenomenon. “The tip does double-duty in this case,” he says.

This could be a step toward the creation of electronic lenses, Levitov says — “a concept that intrigues graphene researchers.” In principle, these could provide a way of observing objects one-thousandth the size of those visible using light waves.

Electronic lenses would represent a fundamentally different approach from existing electron microscopes, which bombard a surface with high-energy beams of electrons, obliterating any subtle effects within the objects being observed. Electron lenses, by contrast, would be able to observe the ambient low-energy electrons within the object itself.

An appealing feature of the setup developed in NIST is that the boundary between the two surface regions, which can serve as a lens, is movable, since it is carried along with the STM tip when it is scanning the surface. This could make it possible to study “subtle things about how charge carriers behave at a microscopic level, that you can’t see from the outside,” Levitov says.

The new work by Levitov and his colleagues provides one piece of such a system — and potentially of other advanced electro-optical systems, he says, such as negative-refraction materials that have been proposed as a kind of “invisibility cloak.” The new whispering-gallery mode for electrons is part of a toolbox that could lead to a whole family of new quantum-based electron-optics devices. It could also be used for high-fidelity sensing, since such resonators “can be used to enhance your sensitivity to very small signals,” Levitov says.

Harvard’s Kim says that this work “is an important step toward building novel electronic applications, based on the unique relativistic quantum-mechanical behavior of electrons in graphene.”