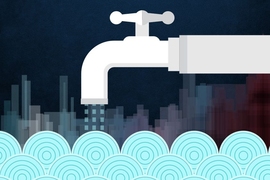 ↓ Download Image
Caption: Researchers have found there is often a strong case for building relatively modest, incremental additions to water infrastructure in advanced countries, rather than expensive larger-scale projects that may be needed only rarely.

Caption:
Researchers have found there is often a strong case for building relatively modest, incremental additions to water infrastructure in advanced countries, rather than expensive larger-scale projects that may be needed only rarely.

If you live in the developed world, safe water is usually just a faucet-turn away. And yet, global warming, drought conditions, and population growth in coming decades could change that, ushering in an era of uncertain access to water.

Now an MIT-based research team has evaluated those potential problems and, based on a case study in Australia, suggested an alternate approach to water planning. In a new paper, the researchers find there is often a strong case for building relatively modest, incremental additions to water infrastructure in advanced countries, rather than expensive larger-scale projects that may be needed only rarely.

More specifically, the study looks at the city of Melbourne, where a 12-year drought from 1997 to 2009 led to construction of a $5 billion facility, the Victorian Desalination Plant. It was approved in 2007 and opened in 2012 — at a time when the drought had already receded. As a result, the plant has barely been used, and its inactivity, combined with its hefty price tag, has generated considerable controversy.

As an alternative, the study suggests, smaller, modular desalination plants could have met Melbourne’s needs at a lower price.

“If you build too much infrastructure, you’re building hundreds of millions or billions of dollars in assets you might not need,” says Sarah Fletcher, a PhD candidate in MIT’s Institute for Data, Systems, and Society (IDSS), who is the lead author of the new paper.

To be sure, Fletcher adds, “You don’t want to be in a situation where you have less water supply than you have demand.” As such, the study does not argue that a single solution applies to all cases, but presents a new method for pinpointing the best plan — and notes that in many cases, “moderate investment increases, together with flexible infrastructure design, can mitigate water-shortage risk significantly.”

The new paper, “Water Supply Infrastructure Planning: Decision-Making Framework to Classify Multiple Uncertainties and Evaluate Flexible Design,” was recently published online in the Journal of Water Resources Planning and Management, and will appear in the October 2017 print volume.

Siddiqi visited Melbourne during its historic drought and learned from local experts about the city’s challenging water-supply problem. The genesis of the current study comes from Siddiqi’s investigation into the Melbourne case and assessment that the complex problem of urban water security lies at the intersection of engineering design and strategic planning.

The MIT team’s new framework for water-supply analysis incorporates several uncertainties that policymakers must confront in these cases, and runs large numbers of simulations of water availability over a 30-year period. It then presents planners with a decision tree about which infrastructure options are best calibrated to their needs.

The significant uncertainties include climate change and its effects on rainfall, as well as the impact of water shortages and population growth.

In studying the Melbourne case, the researchers looked at six infrastructure alternatives, including multiple types of desalination plants and a possible new pipeline to more-distant sources, and combinations of these things.

“The main methodological contribution for the paper is this framework to look at different uncertainties of different types and put that all together in one piece of analysis,” Fletcher says.

The results highlight a vexing problem in water-access planning: Shortages can be acute, but they may last for relatively short periods of time.

Moreover, Fletcher points out, building smaller at first gives planners the ability to bring a new plant online more quickly and then scale up if needed.

So thinking small, in this scenario, make considerable sense. But as the researchers acknowledge, the exact results of their study would likely vary from region to region, depending on all the climate and population factors that affect water supply.

“We’re used to building large-scale desalination plants, and there’s less of history of building more modular plants,” Fletcher says. “It’s challenging because these are large investments with long lifetimes. But if you think of a modular plant as an insurance policy against drought, maybe you want to have it around.”

The high value of water