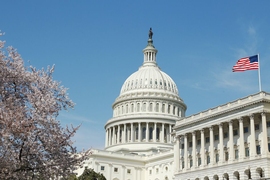 David Goldston, a policy advocate with decades of experience on Capitol Hill, has been named the new director of MIT’s Washington Office, effective May 1.

The appointment was announced today in a letter to the MIT community from President L. Rafael Reif.

“Drawing on his deep knowledge of federal science policy and the people who shape it, David is primed to advocate for government policies that allow science and technology to thrive, as well as for using science to shape sound policy in general,” Reif says.

Goldston will succeed William Bonvillian, who stepped down from the position in January after 11 years of service.

“I look forward to working with David in the town he knows so well, as we strive to make the case for all that MIT represents,” Reif says, thanking the advisory committee to the search, led by Professor Claude Canizares, for its work in the process.

Formed in 1991 as part of MIT’s Office of the President, the Washington Office facilitates a two-way flow of information between the Institute and Washington. The office shares findings by MIT experts with decision makers in the White House, Congress, national research and development agencies, and other Washington organizations. The office also informs MIT’s leadership and faculty of federal policy developments relevant to science, engineering, and innovation.

“A large part of the appeal of this job to me is the range of activities that the Washington Office engages in,” Goldston says. “The office isn’t narrowly lobbying for MIT. It’s concerned about a wide spectrum of issues including those that affect the education community and the science community broadly.”

Goldston says he was also attracted to the job because of the opportunity it offers to work with MIT students; he cites MIT’s Science Policy Initiative, through which the Washington Office engages students in the policymaking process, as an example.

Goldston will take the helm of the Washington Office at time when the future of federal funding for R&D — already a significantly smaller percentage of GDP than it was during the 1960s and ’70s — is more uncertain than ever. President Trump’s proposed budget for the next fiscal year includes steep cuts to many federal agencies that fund research in the physical and social sciences, engineering, and other areas. Such a budget “would damage the nation’s position as a global leader in science and innovation,” Reif wrote in a March 27 letter to the MIT community.

Under Goldston’s leadership, the MIT Washington Office will continue to engage with policymakers about the scientific evidence underlying challenging policy issues, while encouraging the support of science, engineering, and higher education.

“MIT is especially well-placed in Washington because of the nature of its reputation as both an intellectual powerhouse and as a university built on technical expertise,” he says.

This is a compelling time to join MIT, Goldston says: “I think for universities, figuring out what their posture in Washington is and the way forward is more of a challenge maybe than it’s ever been, certainly more than it’s been recently.”

Goldston acknowledges that today’s polarized political climate adds difficulty to the work of the MIT Washington Office, but he notes that he’s worked with both political parties over the course of his career. “I’ve learned how to work with people on both sides of the aisle,” he says.

Before coming to MIT, Goldston was the director of government affairs at the Natural Resources Defense Council (NRDC), where he coordinated all of the nonprofit organization’s interactions with the federal government and helped shape public communications on federal issues. He joined NRDC in 2009, and in 2014 he also became the director of the Council’s Center for Policy Advocacy, a role that included overseeing the NRDC Action Fund.

Currently an adjunct professor of science policy at Georgetown Unversity, Goldston has been a visiting lecturer at Harvard University and Princeton University. His courses have focused on the role science plays in policymaking, and other issues at the intersection between science and policy. Goldston also wrote a monthly column about these topics called “Party of One” for Nature, from 2007 to 2009.

From 2001 to 2006, he served as the chief of staff for the U.S. House of Representatives Committee on Science. In this position oversaw a staff of 40 with jurisdiction over federal science funding agencies including NASA, the National Science Foundation, the Department of Energy and the National Institute of Standards and Technology, among others.

Goldston graduated from Cornell University in 1978 with a BA in history and completed coursework for a PhD in American history at the University of Pennsylvania. He began his career on Capitol Hill in 1983, serving over the years as a press secretary, legislative director, and Science Committee staffer for Sherwood Boehlert, then a Republican congressman from upstate New York and a leading voice for science and for the environment in the Congress.

Letter regarding the new director of MIT’s Washington Office