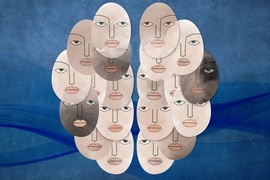 ↓ Download Image
Caption: A new technique can better extract correct answers from large groups of people. For a given question, people are asked two things: What they think the right answer is, and what they think popular opinion will be. The variation between the two aggregate responses indicates the correct answer.
Credits: Image: Christine Daniloff/MIT

Caption:
A new technique can better extract correct answers from large groups of people. For a given question, people are asked two things: What they think the right answer is, and what they think popular opinion will be. The variation between the two aggregate responses indicates the correct answer.
Credits:
Image: Christine Daniloff/MIT

The wisdom of crowds is not always perfect. But two scholars at MIT’s Sloan Neuroeconomics Lab, along with a colleague at Princeton University, have found a way to make it better.

Their method, explained in a newly published paper, uses a technique the researchers call the “surprisingly popular” algorithm to better extract correct answers from large groups of people. As such, it could refine wisdom-of-crowds surveys, which are used in political and economic forecasting, as well as many other collective activities, from pricing artworks to grading scientific research proposals.

The new method is simple. For a given question, people are asked two things: What they think the right answer is, and what they think popular opinion will be. The variation between the two aggregate responses indicates the correct answer.

“In situations where there is enough information in the crowd to determine the correct answer to a question, that answer will be the one [that] most outperforms expectations,” says paper co-author Drazen Prelec, a professor at the MIT Sloan School of Management as well as the Department of Economics and the Department of Brain and Cognitive Sciences.

The paper is built on both theoretical and empirical work. The researchers first derived their result mathematically, then assessed how it works in practice, through surveys spanning a range of subjects, including U.S. state capitols, general knowledge, medical diagnoses by dermatologists, and art auction estimates.

The paper, “A solution to the single-question crowd wisdom problem,” is being published today in Nature. The authors are Prelec; John McCoy, a doctoral student in the MIT Department of Brain and Cognitive Sciences; and H. Sebastian Seung, a professor of neuroscience and computer science at Princeton University and a former MIT faculty member. Prelec and McCoy are also researchers in the MIT Neuroeconomics Laboratory, where Prelec is the principal investigator.

To see how the algorithm works in practice, consider a case the researchers tested. A group of people were asked a yes-or-no question: Is Philadelphia the capital of Pennsylvania? They were also asked to predict the prevalence of “yes” votes.

Meanwhile, a certain number of respondents knew that Harrisburg is the correct answer. However, a large portion of those people also anticipated that many other people would incorrectly think the capital is Philadelphia. So the people who themselves answered “no” still expected a very high percentage of “yes” answers.

That means the answer to the two questions — Is Philadelphia the capital? Will other people think so? — diverged. Almost everyone expected other people to answer “yes.” But the actual percentage of people who answered “yes” was significantly lower. For this reason, the “no” answer was the “surprisingly popular” one, since it deviated from expectations of what the answer would be.

And since the “surprisingly popular” answer differed in the “no” direction, that tells us the correct answer: No, Philadelphia is not the capital.

The wisdom of subsets of crowds

In this sense, the “surprisingly popular” principle is not simply derived from the wisdom of crowds. Instead, it uses the knowledge of a well-informed subgroup of people within the larger crowd as a diagnostically powerful tool that points to the right answer.

“A lot of crowd wisdom weights people equally,” McCoy explains. “But some people have more specialized knowledge.” And those people — if they have both correct information and a correct sense of public perception — make a big difference.

This is the case across scenarios that the researchers tested. Consider art. The researchers asked art professionals to guess the price range for different contemporary artworks. Individually, art experts selected price ranges that were typically too low, perhaps because selecting a lower range is a reasonable, safe answer for an artwork that the expert does not recognize. Collectively, this makes the majority opinion of an expert panel even more biased in the direction of low prices.

And this is where the “surprisingly popular” principle makes a difference, since it does not depend on an absolute majority of expert opinion. Instead, suppose a relatively small number of experts believe a piece sold for $100,000, while anticipating that most other people will think it sold for less. In that case, the evaluations of those experts will lead the “surprisingly popular” answer to be that the artwork was more expensive than most people thought.

“The argument in this paper, in a very rough sense, is that people who expect to be in the minority deserve some extra attention,” Prelec says.

The scholars recognize that the “surprisingly popular” algorithm is not theoretically foolproof in practice. It is at least conceivable that people could anticipate a “surprisingly popular” opinion and try to subvert it, although that would be very hard to execute. It is also the case, as they write in the Nature paper, that “These claims are theoretical and do not guarantee success in practice, as actual respondents will fall short of ideal.”

Other scholars who have studied collective-wisdom problems believe the method is valuable. Aurelien Baillon, a professor of economics at Erasmus University in Rotterdam, who has read the paper, calls it an “exciting” result that “opens up completely new ways to think about an old problem.” Baillon finds the paper persuasive, he adds, because it contains both theoretical arguments “and empirical evidence that it works well.”

Baillon does note that the question of how people reach conclusions about the beliefs of others “can still be further explored” theoretically. And he observes one potential practical pitfall in the method: the possibility that all participants in a survey do not have useful knowledge about what others think, and make a random choice if given two options. Such a 50/50 split, Baillon observes, means the “surprisingly popular” answer would simply be the majority result.

Still, the researchers themselves hope their work will be tested in a variety of settings. In the paper they express confidence that the “surprisingly popular” principle will prove durable, asserting: “Such knowledge can be exploited to recover truth even when traditional voting methods fail.”

Wall Street Journal reporter Daniel Akst writes that MIT researchers have developed a way to “tap into the insight of the expert minority within a crowd—a minority whose views would otherwise be swamped in a simple majority vote or poll.” The technique significantly enhanced “the wisdom of crowds, reducing errors by more than 20%.”

Scientific American reporter Simon Makin writes that MIT researchers have developed a new approach to extract correct answers from a crowd. “The new method performed better than majority or confidence-based methods alone, reducing errors by between 21 and 35 percent,” Makin explains.

An algorithm developed by MIT researchers helps extract the correct answer from a large group of people even when the majority of people answer incorrectly, writes Erin Ross for Nature. While previous assumptions viewed the average opinion of a crowd as correct, the algorithm identifies “specialists with special knowledge, like doctors,” explains Prof. Dražen Prelec.

Views you can use? How online ratings affect your judgment