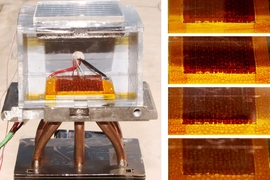 ↓ Download Image
Caption: This proof-of-concept device, built at MIT, demonstrates a new system for extracting drinking water from the air. The sequence of images at right shows how droplets of water accumulate over time as the inside temperature increases while exposed to the sun.

Credits: Images courtesy of the researchers

Caption:
This proof-of-concept device, built at MIT, demonstrates a new system for extracting drinking water from the air. The sequence of images at right shows how droplets of water accumulate over time as the inside temperature increases while exposed to the sun.
Credits:
Images courtesy of the researchers

Severe water shortages already affect many regions around the world, and are expected to get much worse as the population grows and the climate heats up. But a new technology developed by scientists at MIT and the University of California at Berkeley could provide a novel way of obtaining clean, fresh water almost anywhere on Earth, by drawing water directly from moisture in the air even in the driest of locations.

Technologies exist for extracting water from very moist air, such as “fog harvesting” systems that have been deployed in a number of coastal locations. And there are very expensive ways of removing moisture from drier air. But the new method is the first that has potential for widespread use in virtually any location, regardless of humidity levels, the researchers say. They have developed a completely passive system that is based on a foam-like material that draws moisture into its pores and is powered entirely by solar heat.

Fog harvesting, which is being used in many countries including Chile and Morocco, requires very moist air, with a relative humidity of 100 percent, explains Wang, who is the Gail E. Kendall Professor at MIT. But such water-saturated air is only common in very limited regions. Another method of obtaining water in dry regions is called dew harvesting, in which a surface is chilled so that water will condense on it, as it does on the outside of a cold glass on a hot summer day, but it “is extremely energy intensive” to keep the surface cool, she says, and even then the method may not work at a relative humidity lower than about 50 percent. The new system does not have these limitations.

For drier air than that, which is commonplace in arid regions around the world, no previous technology provided a practical way of getting water. “There are desert areas around the world with around 20 percent humidity,” where potable water is a pressing need, “but there really hasn’t been a technology available that could fill” that need, Wang says. The new system, by contrast, is “completely passive — all you need is sunlight,” with no need for an outside energy supply and no moving parts.

Imagine a future in which every home has an appliance that pulls all the water the household needs out of the air, even in dry or desert climates, using only the power of the sun.

In fact, the system doesn’t even require sunlight — all it needs is some source of heat, which could even be a wood fire. “There are a lot of places where there is biomass available to burn and where water is scarce,” Rao says.

The key to the new system lies in the porous material itself, which is part of a family of compounds known as metal-organic frameworks (MOFs). Invented by Yaghi two decades ago, these compounds form a kind of sponge-like configuration with large internal surface areas. By tuning the exact chemical composition of the MOF these surfaces can be made hydrophilic, or water-attracting. The team found that when this material is placed between a top surface that is painted black to absorb solar heat, and a lower surface that is kept at the same temperature as the outside air, water is released from the pores as vapor and is naturally driven by the temperature and concentration difference to drip down as liquid and collect on the cooler lower surface.

Tests showed that one kilogram (just over two pounds) of the material could collect about three quarts of fresh water per day, about enough to supply drinking water for one person, from very dry air with a humidity of just 20 percent. Such systems would only require attention a few times a day to collect the water, open the device to let in fresh air, and begin the next cycle.

What’s more, MOFs can be made by combining many different metals with any of hundreds of organic compounds, yielding a virtually limitless variety of different compositions, which can be “tuned” to meet a particular need. So far more than 20,000 varieties of MOFs have been made.

“By carefully designing this material, we can have surface properties that can absorb water very efficiently at 50 percent humidity, but with a different design, it can work at 30 percent,” says Kim. “By selecting the right materials, we can make it suitable for different conditions. Eventually we can harvest water from the entire spectrum” of water concentrations, he says.

Yaghi, who is the founding director of the Berkeley Global Science Institute, says “One vision for the future is to have water off-grid, where you have a device at home running on ambient solar for delivering water that satisfies the needs of a household. … To me, that will be made possible because of this experiment. I call it personalized water.”

While these initial experiments have proved that the concept can work, the team says there is more work to be done in refining the design and searching for even more effective varieties of MOFs. The present version can collect water up to about 25 percent of its own weight, but with further tuning they think that proportion could be at least doubled.

“Wow, that is an amazing technology,” says Yang Yang, a professor of engineering at the University of California at Los Angeles, who was not involved in this work. “It will have a tremendous scientific and technical impact on renewable and sustainable resources, such as water and solar energy.”

The work was supported in part by ARPA-E, a program of the U.S. Department of Energy.

Mike Wankum from WCVB visits Prof. Evelyn Wang in her lab to learn about a device that can extract water from the air in dry climates. To test the device, the research team will put “a water harvester on the roof of a building at the University of Arizona,” explains Wankum.

In an article about metal organic frameworks (MOFs), Max Opray of The Guardian highlights Prof. Evelyn Wang’s work developing a device that can extract water from the air. The transparent box developed by Prof. Wang and her team “delivers enough drinking water for a person’s daily needs,” explains Opray.

Wall Street Journal reporter Daniel Akst writes about a new solar-powered, water-harvesting device developed by MIT researchers. The device is “about the size of a Kleenex box [and] can suck lifesaving amounts of water out of the air even in extremely arid places.”

CNN reporter Kaya Yurieff writes that MIT researchers have created a device that can harvest drinking water from the air, even in desert climates. “I'm most excited about being able to realize a functioning device in these remote areas and to be able to provide clean water to all the people who need it," says Prof. Evelyn Wang.

In an article published by Scientific American, Amin Al-Habaibeh writes about a device developed by MIT researchers that can extract drinking water from the atmosphere. Al-Habaibeh notes that the device’s ability to harvest water in dry regions, only using solar power, makes it a “particularly promising technology for harvesting water in arid or desert regions of the world.”

MIT researchers have developed a device that draws water from the air using solar power, writes David Morris for Fortune. The device could serve as a possible solution for regions facing issues with water access, and “could unleash massive growth in regions where it’s still a problem, both at home and abroad,” concludes Morris.

Joe Palca of NPR reports on a device developed by researchers from MIT and the University of California at Berkeley that uses a new technique to extract water from the air. Palca explains that the device uses “less power and works in drier environments,” than other technologies designed to turn water vapor into drinking water.

A device co-developed by Prof. Evelyn Wang can remove water vapor from the air, producing almost 3 liters of water a day, writes Robert Service for Science. The device could eventually be used to provide homes in the driest parts of the world with “a solar-powered appliance capable of delivering all the water they need, offering relief to billions of people.”

Newsweek reporter Hannah Osborne writes that researchers from MIT and the University of California at Berkeley have developed a device that can extract drinking water from the air using power generated by sunlight. “Because this device is passive you can really reach out to remote areas that don’t have infrastructure,” explains Prof. Evelyn Wang.

Prof. Evelyn Wang and her colleagues have developed a device that can remove water from the air, writes Sam Lemonick for Forbes. “The technology could be a boon to people living in arid regions or places where there is extreme drought,” writes Lemonick.

Movable microplatform floats on a sea of droplets