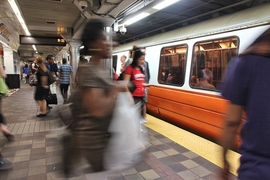 Caption:
A new digital tool developed by an MIT team lets people design alterations to transit networks and estimate the resulting improvements, based on existing data from urban transit systems.

Have you ever wanted to change your city’s public transit system? A new digital tool developed by an MIT team lets people design alterations to transit networks and estimate the resulting improvements, based on existing data from urban transit systems. The team, led by Christopher Zegras, a professor in MIT’s Department of Urban Studies and Planning, has already tested the tool with residents in four major U.S. cities — Atlanta, Boston, New Orleans, and San Francisco — as well as in London and Santiago de Chile, and is now planning additional projects in Chile, Colombia, and South Africa. Now the researchers have released a report evaluating how the tool, called CoAXs, has fared during these tests. Zegras spoke to MIT News about the project.

Q: What is the CoAXs project all about?

A: It’s a tool that’s designed as a web-based user interface to allow people to explore how changes in public transportation systems would potentially impact the way they can move around a city — and to do it in a relatively intuitive way. You can increase the number of buses per hour or how frequently the trains arrive. Or you can speed up vehicles en route. We designed it to be used on a large touchscreen in small-group settings, to develop a common understanding among different types of stakeholders, with the idea that this could perhaps build new coalitions for public transportation improvements.

Q: You have tested use of the CoAXs tool in four cities: Boston, Atlanta, New Orleans, and San Francisco, some of which are in the process of adding to their transit systems, including rail expansions and better bus networks. What did you find?

A: The original place we deployed the tool was a project supported by the Barr Foundation here in Boston in 2015 to enhance bus rapid transit in Boston. The community we focused on was Roxbury, which has historically been disadvantaged in terms of public transit but is quite dependent on it. We tried it in workshops, and users found the CoAXs tool to be easy to use, and credible. And relatable. They could examine how the model [represented] their current transportation experiences. That led to people questioning the assumptions of the [CoAXs] models, which I think is a very important thing if you want to generate credibility — it helps them understand and intuit how it works. Then they would say: What if you did bus transit priority on this corridor, or increased the frequencies, or decreased the boarding time?

A key element of the tool is representing benefits in terms of accessibility, or the ability to reach opportunities — such as, how many [additional] jobs you can get to in a certain amount of time. From my perspective, accessibility is the fundamental reason we have a transportation system … to get to work, to school, to see our loved ones in a reasonable amount of time. But traditionally we measure transportation through travel-time savings: three minutes per passenger, as opposed to, say, opening up 30,000 new job opportunities.

Last year we were awarded a grant by the TransitCenter, a U.S. Foundation dedicated to urban mobility, to test the tool as a way to build enthusiasm for public transportation projects among advocacy organizations. In the Boston area we partnered in a series of face-to-face workshops with the LivableStreets Alliance [of Cambridge, Massachusetts]. Beyond seeing whether the tool generated support for transit improvements, we also aimed to test for differences in presenting benefits to users in terms of accessibility versus travel time. [That is, accessibility to more jobs through public transit.] Some participant groups were randomly assigned to use an accessibility-based version of the tool, while some used a travel-time version. And in that sense our results were a little disappointing to me, vis-a-vis accessibility: The version of the tool that reflected relationships between public transit and job accessibility generated richer conversations, but people didn’t find it easier to use. And overall levels of enthusiasm among the two groups did not vary significantly.

We then partnered with three advocacy organizations, in New Orleans, Atlanta, and San Francisco, to see whether a remote deployment would work [with people using CoAXs outside of a group setting]. A key premise of CoAXs is that it can enhance engaged dialogue, which is important to building consensus, and we found people to engage less when using it on their own. When we had workshops, people really engaged. I think this shows that a tool like this is best used in face-to-face, group workshop settings. That said, I can also imagine a hybrid approach: having workshops, using it at home, and then reconvening.

Q: Overall, then, what is your philosophy about blending public feedback with the analysis of specialists — how necessary is that for transit issues?

A: This is an age-old challenge to planning: How do you meaningfully and fairly engage people? And “fairly” is important, because it means everyone should have an opportunity to contribute — but not everyone can afford to, in terms of time, and energy, and ability to participate, physically or otherwise. That’s a dimension that’s difficult to navigate.

With CoAXs, yes, we are trying to build on the idea of “co-creation” [between designers and consumers], which has become increasingly adapted into the public realm. The Swiss, for example, have been leaders in this regard, with the Swiss Railways working directly with consumers to design services better. And this is along the same lines: Can you co-create public transportation by helping to better develop a common understanding of the nature of the problems, the possibilities, and the constraints? CoAXs is only a tool; it’s not a solution, but I think it has a role to play in enhancing the public process. Perhaps more interactive, open, data-based approaches might change, a little bit, the possibilities for enhancing public engagement. Ultimately, however, the solution isn’t digital. The question is: How can we use digitalization to improve public processes? That’s what we’re trying to find out.