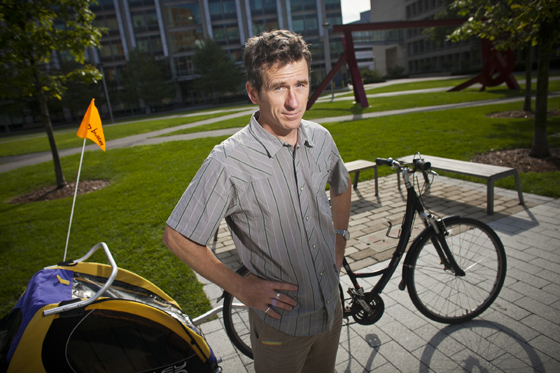 When Chris Zegras started studying the way cities work, in the early 1990s, it wasn’t in a classroom, and he wasn’t pursuing a formal academic project. Instead, Zegras was a recent college graduate who had majored in economics and Spanish, and was trying to combine both of those interests in his first real job. As such, he had found a position in Santiago, the capital of Chile, working in finance.

“Chile had been going through its re-emergence as a democracy, and I wanted to see what that was like,” Zegras says.

But before long, Zegras realized that what was going on outside his office was more interesting than anything he was doing on the job. In particular, he became fascinated by the flow of people in bustling Santiago — on buses, in the city’s subway system, and in the hundreds of thousands of cars that contributed to Santiago’s chronic pollution problems.

“In my free time, I just observed the city,” he says. “I became very interested in the links between environment and development, and the city was a perfect microcosm of that.”

Soon Zegras had dropped the finance job and thrown himself into urban planning. Today, as a newly tenured professor in MIT’s Department of Urban Studies and Planning (DUSP) and Engineering Systems Division, he is an expert on urban transportation systems and energy use, with a lengthy series of published papers to his name. And while Zegras has continued to study Latin America closely, in recent years he has started working in Asia, too. Zegras has been part of MIT’s efforts to apply technology to urban mobility in Singapore, and is part of an MIT group developing what’s dubbed the “Energy Pro Forma” for use in China — a planning tool estimating how much energy people will use when placed into varying types of urban settings.

“It’s the rapidly industrializing world upon which the future hinges,” Zegras says. “The challenge is how we can … take our knowledge, and build a better place.” Given the threat of climate change, cleaner development in Latin America and Asia is vital, Zegras believes, so that people in those regions can obtain “the standard of living we all aspire to, but in a way that we all benefit from globally.”

Zegras can recall one early precursor to his career: Growing up in suburban Connecticut, he and his brother would construct toy metropolises at home. “We were extremely into building cities with Legos, the whole bedroom was a city,” Zegras says. Perhaps, he says, “I was always on this path and didn’t know it.”

He attended Tufts University as an undergraduate, and after returning from Santiago, found a job with the International Institute for Energy Conservation, a policy organization in Washington, where he started out editing reports on urban transportation and energy use in Asia, then, over the course of several years, conducted his own research and ran the institute’s Latin American Transport Program.

“I just started knowing this stuff really well,” Zegras says. “I was fortunate enough to have fallen into a job [where] I could grow.” Eventually, though, Zegras felt he would need another degree to improve his long-term career prospects. So he applied to the master’s program at DUSP. “My intention was to come here for two years, get a grad degree, and go back to Washington or Latin America and work.”

Instead, Zegras has not left MIT. Not long after starting in DUSP, he decided to pursue his PhD, which he received in 2005. In a stroke of good timing for him, a faculty position opened up at MIT when he was on the job market — and he got it.


Zegras’ body of work includes many close empirical studies of urban movement patterns and greenhouse gas emissions in Santiago, as well as research on transportation in several cities in China and the United States.

As Zegras sees it, his research comprises three overlapping issues. The first concerns human behavior: “Does the way we build cities affect the way we move in them?” he asks. The second is using that knowledge to improve urban planning. And the third involves ways of actually getting those better, more energy-efficient plans implemented in cities globally. To that end, Zegras has written papers on alternate ways of financing urban-design projects.

Getting designers to hit the target

Zegras’ commitment to putting new planning ideas into action shows through in his recent efforts to help develop the Energy Pro Forma, which models the behavior of people in urban environments — based in part on his research — to arrive at a bottom-line figure for energy use given any type of urban neighborhood design. (A financial pro forma, from which the term derives, evaluates the financial performance of a real estate project.) Among their findings: The modernist “towers in a park” design, with residential skyscrapers surrounded by open spaces, is about the least energy-efficient neighborhood plan in existence.

In recent years, Zegras and Dennis Frenchman, another professor in DUSP, have been working with colleagues at Beijing’s Tsinghua University to see how the Energy Pro Forma can be used in the design process.

“It actually has visibly changed the way the students approached the design problem, and changed the design product,” Zegras says. “We’re testing this in an academic or laboratory setting, but our ideal is to ultimately create a tool that developers and officials can use.” The key, he feels, is that the Energy Pro Forma allows planners to be as creative as they wish, while letting them know the energy costs of their ideas. “It’s a way of saying, ‘Hit this target,’ and then letting the designers innovate,” Zegras explains.

Zegras and Frenchman expect to have an operational version of the Energy Pro Forma ready by end of the current academic year. Zegras has also presented on the tool at a conference of high-level Chinese city planners, although, as he acknowledges, the adoption of new ideas takes time.

Another avenue of influence, he notes, is through training students to think broadly about urban design so that energy efficiency becomes integral to their plans. “We’ve got a large and ever-growing cadre of people out there who are taking this knowledge and will hopefully put it into practice,” Zegras says.

Ultimately, Zegras thinks, being in urban studies means having the responsibility of having an impact on the world, and not just within the academy.

“That’s a tough question that I always ask myself in this field: How do you effect change?” he says. “It’s [one thing] to run studies and experiments, do my analysis … but at the same time, what do I leave for my daughter?”