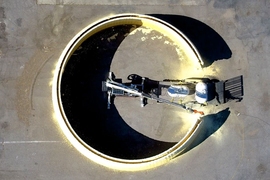 ↓ Download Image
Caption: MIT researchers have designed a system that can 3-D print the basic structure of an entire building. The system consists of a tracked vehicle that carries a large industrial robotic arm, which has a smaller, precision-motion robotic arm at its end.

Caption:
MIT researchers have designed a system that can 3-D print the basic structure of an entire building. The system consists of a tracked vehicle that carries a large industrial robotic arm, which has a smaller, precision-motion robotic arm at its end.

The list of materials that can be produced by 3-D printing has grown to include not just plastics but also metal, glass, and even food. Now, MIT researchers are expanding the list further, with the design of a system that can 3-D print the basic structure of an entire building.

Structures built with this system could be produced faster and less expensively than traditional construction methods allow, the researchers say. A building could also be completely customized to the needs of a particular site and the desires of its maker. Even the internal structure could be modified in new ways; different materials could be incorporated as the process goes along, and material density could be varied to provide optimum combinations of strength, insulation, or other properties.

Ultimately, the researchers say, this approach could enable the design and construction of new kinds of buildings that would not be feasible with traditional building methods.

The robotic system is described this week in the journal Science Robotics, in a paper by Steven Keating PhD ’16, a mechanical engineering graduate and former research affiliate in the Mediated Matter group at the MIT Media Lab; Julian Leland and Levi Cai, both research assistants in the Mediated Matter group; and Neri Oxman, group director and associate professor of media arts and sciences.

The system consists of a tracked vehicle that carries a large, industrial robotic arm, which has a smaller, precision-motion robotic arm at its end. This highly controllable arm can then be used to direct any conventional (or unconventional) construction nozzle, such as those used for pouring concrete or spraying insulation material, as well as additional digital fabrication end effectors, such as a milling head.

Unlike typical 3-D printing systems, most of which use some kind of an enclosed, fixed structure to support their nozzles and are limited to building objects that can fit within their overall enclosure, this free-moving system can construct an object of any size. As a proof of concept, the researchers used a prototype to build the basic structure of the walls of a 50-foot-diameter, 12-foot-high dome — a project that was completed in less than 14 hours of “printing” time.

For these initial tests, the system fabricated the foam-insulation framework used to form a finished concrete structure. This construction method, in which polyurethane foam molds are filled with concrete, is similar to traditional commercial insulated-concrete formwork techniques. Following this approach for their initial work, the researchers showed that the system can be easily adapted to existing building sites and equipment, and that it will fit existing building codes without requiring whole new evaluations, Keating explains.

Ultimately, the system is intended to be self-sufficient. It is equipped with a scoop that could be used to both prepare the building surface and acquire local materials, such as dirt for a rammed-earth building, for the construction itself. The whole system could be operated electrically, even powered by solar panels. The idea is that such systems could be deployed to remote regions, for example in the developing world, or to areas for disaster relief after a major storm or earthquake, to provide durable shelter rapidly.

The ultimate vision is “in the future, to have something totally autonomous, that you could send to the moon or Mars or Antarctica, and it would just go out and make these buildings for years,” says Keating, who led the development of the system as his doctoral thesis work.

But in the meantime, he says, “we also wanted to show that we could build something tomorrow that could be used right away.” That’s what the team did with its initial mobile platform. “With this process, we can replace one of the key parts of making a building, right now,” he says. “It could be integrated into a building site tomorrow.”

“The construction industry is still mostly doing things the way it has for hundreds of years,” says Keating. “The buildings are rectilinear, mostly built from single materials, put together with saws and nails,” and mostly built from standardized plans.

But, Keating wondered, what if every building could be individualized and designed using on-site environmental data? In the future, the supporting pillars of such a building could be placed in optimal locations based on ground-penetrating radar analysis of the site, and walls could have varying thickness depending on their orientation. For example, a building could have thicker, more insulated walls on its north side in cold climates, or walls that taper from bottom to top as their load-bearing requirements decrease, or curves that help the structure withstand winds.

The creation of this system, which the researchers call a Digital Construction Platform (DCP), was motivated by the Mediated Matter group’s overall vision of designing buildings without parts. Such a vision includes, for example, combining “structure and skin,” and beams and windows, in a single production process, and adapting multiple design and construction processes on the fly, as the structure is being built.

From an architectural perspective, Oxman says, the project “challenges traditional building typologies such as walls, floors, or windows, and proposes that a single system could be fabricated using the DCP that can vary its properties continuously to create wall-like elements that continuously fuse into windows.”

To this end, the nozzles of the new 3-D printing system can be adapted to vary the density of the material being poured, and even to mix different materials as it goes along. In the version used in the initial tests, the device created an insulating foam shell that would be left in place after the concrete is poured; interior and exterior finish materials could be applied directly to that foam surface.

The system can even create complex shapes and overhangs, which the team demonstrated by including a wide, built-in bench in their prototype dome. Any needed wiring and plumbing can be inserted into the mold before the concrete is poured, providing a finished wall structure all at once. It can also incorporate data about the site collected during the process, using built-in sensors for temperature, light, and other parameters to make adjustments to the structure as it is built.

Keating says the team’s analysis shows that such construction methods could produce a structure faster and less expensively than present methods can, and would also be much safer. (The construction industry is one of the most dangerous occupations, and this system requires less hands-on work.) In addition, because shapes and thicknesses can be optimized for what is needed structurally, rather than having to match what’s available in premade lumber and other materials, the total amount of material needed could be reduced.

While the platform represents an engineering advance, Oxman notes. “Making it faster, better, and cheaper is one thing. But the ability to design and digitally fabricate multifunctional structures in a single build embodies a shift from the machine age to the biological age — from considering the building as a machine to live in, made of standardized parts, to the building as an organism, which is computationally grown, additively manufactured, and possibly biologically augmented.”

“So to me it’s not merely a printer,” she says, “but an entirely new way of thinking about making, that facilitates a paradigm shift in the area of digital fabrication, but also for architectural design. … Our system points to a future vision of digital construction that enables new possibilities on our planet and beyond.”

Reporting for WBUR on the future of digital fabrication, Bruce Gellerman highlights a solar-powered architectural robot developed by MIT researchers. The robot can quickly design and build shelters for use in disaster-response situations or space exploration using a 3-D printing process.

CNN reporter Kaya Yurieff writes that MIT researchers have developed a robotic system that can 3-D print a building. Yurieff explains that the researchers, “want to deploy their system in remote regions, such as in the developing world or in disaster relief areas, for example after a major earthquake, to provide shelter quickly.”

MIT researchers have developed a robotic system that can 3-D print the basic structure of a building, writes Amina Khan for the Los Angeles Times. Khan explains that 3-D printing buildings, “has a number of advantages, many of which allow the robot to design and build more in the way that living systems in nature do.”

MIT researchers have developed a robotic 3-D printer that can construct a building, reports TechCrunch’s Brian Heater. “Our future vision for this project is to have self-sufficient robotic systems,” explains alumnus Steven Keating. “Just like a tree gathers its own energy, our platform is being developed toward the design goal of being able to gather its own energy.”

Don Reisinger writes for Fortune that MIT researchers have developed a robot that can 3-D print a free-standing structure in 14 hours. The researchers hope the robot, which consists of two robotic arms attached to a vehicle, can be used to construct buildings in “disparate parts of the world or even on other planets,” explains Reisinger.

MIT researchers have developed a new robotic system that can 3-D print the basic structure of a building, writes Michelle Starr for CBS News. Starr explains that the system is “free moving, can be customized to print on any suitable surface and is intended to be self-sufficient.”

MIT researchers have developed a robot that can 3-D print the basic structure of buildings, writes Matthew Hutson for Science. The autonomous robot sprays an expanding foam into the desired shape “to build up a hollow wall that serves as insulation and can later be filled with concrete and covered in plaster,” explains Hutson.

CBC News reporter Matthew Braga writes that MIT researchers have designed a system that can 3-D print the basic structure of buildings. The researchers believe the system could one day be used to “build structures in extreme or inhospitable environments — say, the aftermath of an earthquake, or even on another planet.”