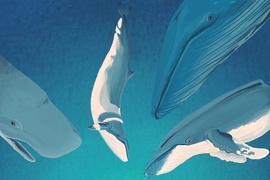 For a few weeks in early fall, Georges Bank — a vast North Atlantic fishery off the coast of Cape Cod — teems with billions of herring that take over the region to spawn. The seasonal arrival of the herring also attracts predators to the shallow banks, including many species of whales.

Now researchers from MIT, Northeastern University, the Institute of Marine Research in Norway, and the National Oceanic and Atmospheric Administration, have found that as multiple species of whales feast on herring, they tend to stick with their own kind, establishing species-specific feeding centers along the 150-mile length of Georges Bank. The team’s results are published today in the journal Nature.

Based on acoustic data they collected in the region in 2006, the researchers identified and mapped the calls of various whales, and discovered a clear grouping of species within the dense herring shoals: Humpback whales congregated in two main clusters, at either end of the spawning grounds, while minke, fin, and blue whales set up feeding territories in the space in between.

In general, calls from each whale species increased dramatically at nighttime, when herring tended to form extremely dense shoals. During the day, these whale calls dissipated, as herring scattered throughout the seafloor.

These results represent the first time that scientists have observed such predator and prey interactions over a large marine region.

“It’s known that different marine mammal species will eat fish, but no one has mapped their simultaneous feeding distributions over these huge scales,” says Purnima Ratilal PhD ’02, associate professor of electrical and computer engineering at Northeastern University. “Maybe there is some territorialism going on, or maybe they are preferentially selecting these locations based on their different foraging mechanisms. That’s material for new research.”

Ratilal and her husband, Nicholas Makris, professor of mechanical engineering at MIT, along with their students, are co-authors of the paper.

In 2006, Makris and Ratilal led a two-week cruise to Georges Bank, initially to track and study the behavior of populations of herring, which can number in the billions within a single shoal. The team had developed a remote-sensing system that uses acoustics to instantaneously image and continuously monitor fish populations over  tens of thousands of square kilometers. Unlike conventional technologies, their system uses the ocean as a waveguide through which acoustic waves can travel over much greater distances, to sense the marine environment.

To get a much wider, more detailed view of the herring populations, Makris and Ratilal deployed 160 hydrophones during their 2006 cruise, towing the array, like a “big acoustic antenna,” in and around Georges Bank. Using their ocean acoustic waveguide sensing technique, they mapped the evolving shoals over the two-week period in October.

During that cruise, the group remembers hearing distinct sounds coming through  the ship’s hull.

“We were hearing these strange haunting sounds in the galley, like an upsweep, then a down-sweep,” Makris recalls. “Purnima recognized these were whale calls, and had all the characteristics of a classic humpback song. At that point she started the research that led to the current paper in Nature, which she spearheaded.”

Makris notes that such whale calls have been heard through the hulls of ships for thousands of years.

“The Patogonian Indians even had a name for them: 'Yakta,’” Makris says. “People had been listening to these sounds for a very long time, and it’s really this century that we’re starting to localize and observe their behavior.”

Hearing hotspots in the night

The group continued looking through the data, even after they had analyzed them for herring signals, to look this time for whale calls. The team developed a technique to sift through the acoustic data for interesting signals — a method called passive ocean acoustic waveguide remote sensing (POAWRS).

Through the years, the team gathered research on the characteristics of certain whale species’ calls and looked for these characteristics in their acoustic data. They eventually identified several hundred thousand calls, mostly along the northern edge of Georges Bank.

“Different marine mammals in the ocean produce different sounds, sort of related to their size,” Ratilal says. “Humpbacks have a distinct song, while some species of tooth whales can sound like birds chirping.”

“Fin whale calls, on the other hand, are in the register of a bass guitar,” Makris adds.

The researchers  located the source of each call by triangulation and other methods unique to waveguides, and found that the call rates of four main species of whales observed — humpback, sei, minke, and blue — tended to go up significantly at night, possibly in response to the increasing number of herring.

“Spawning herring typically don't form big shoals during daytime because it’s too risky they can get caught more easily,” Makris notes. “So they form just as the sun goes down. That’s when the whale calls start going wild and begin to come from on top of the shoals.”

These calls were concentrated in species-specific “hotspots,” with humpback whale calls bookending the other three species, all along the northern length of Georges Bank.

The group found that humpbacks in particular emitted a distinct pattern of calls that may indicate a cooperative feeding ritual, which others have observed.

“The whales will circle the herring, and then one will blow a bubble to contain the fish group, and another will scream and scare the fish into a tight ball,” Ratilal says. “Then another will give a signal, and they’ll all come up with their jaws open.”

Jeff Simmen executive director of the Applied Physics Laboratory at the University of Washington, says that for the most part, technologies used to observe marine ecosystems are unable to localize fish and marine mammals at the same time. In contrast, Makris and Ratilal’s approach “provides unusual insight into the macroscopic behavior of marine populations.”

“In short, the methodology provides a new and grand view of marine populations that will lead to completely new perspectives about the marine ecosystem, perhaps in a similar way that the enhanced views from the Hubble Space Telescope have changed our perspectives on the universe,” Simmen says.

Going forward, the team hopes to tease out more marine behaviors in their dataset.

“With this technology, you can really sense a lot of things,” Makris says. “Fish and marine mammals are just two examples.” Ratilal adds, “There are quite a few other interesting  phenomena in our dataset.”

This research was supported, in part, by the Ocean Acoustics Program of the Office of Naval Research, the National Science Foundation, the National Oceanographic Partnership Program, the Alfred P. Sloan Foundation, and is a contribution to the Census of Marine Life.

How strong is a hurricane? Just listen