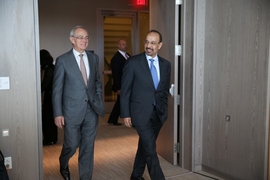 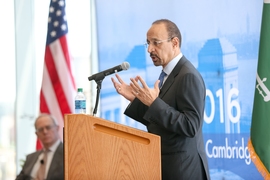 MIT hosted Khalid Al-Falih, head of Saudi Arabia’s new Ministry of Energy, Industry and Mineral Resources, for a wide-ranging talk and discussion on Friday about the country’s long-term directions in economic and human development.

The event convened a group of leaders from academic and business circles in Massachusetts, who participated in a discussion after opening remarks by Al-Falih and MIT President L. Rafael Reif.

In his introductory comments, Reif called Al-Falih “a visionary, strategic thinker,” adding: “He is passionate about education, human resource development, and science and technology ventures.”

Reif also noted that over half the population of Saudi Arabia is under age 25. “It is a country of the future,” he said.

Al-Falih’s remarks and the ensuing discussion covered many issues related to Saudi Arabia’s widely-discussed “Vision 2030” project, a new policy agenda released to the public in April. “Vision 2030” seeks to diversify Saudi Arabia’s economy beyond its traditional strength in oil, to include greater capacity in petrochemicals, services, logistics, tourism, and even renewable energy, starting with some solar and wind projects.

All told, as the public report on “Vision 2030” states, Saudi Arabia aims to increase its non-oil-related government revenue roughly sixfold by the year 2030, while building further partnerships with private industry.

During his career, Al-Falih has held multiple positions in the Saudi Arabian government, including leadership of the Ministry of Health. He has served as CEO of Saudi Aramco, the oil and gas producer, and is currently chair of the company.

Al-Falih has been an instrumental supporter of the Ibn Khaldun Fellowships at MIT, which provide support for female Saudi Arabian scientists and engineers to do postdoctoral research at MIT. Saudi Aramco is also a founding member of the MIT Energy Initiative.