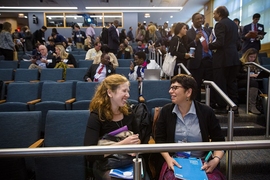 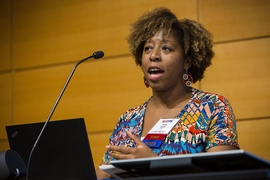 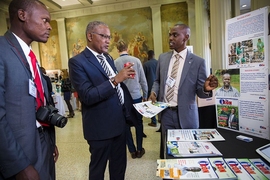 ↓ Download Image
Caption: During the Innovation Marketplace, student teams from MIT and other universities around the world pitched startup and research ideas to attendees, who voted for their favorites. Teams with the most votes earned cash and other prizes.
Credits: Photo: Casey Atkins 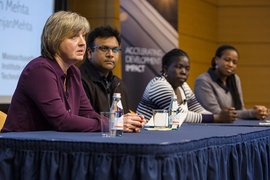 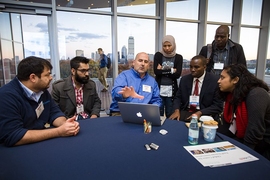 ↓ Download Image
Caption: Various workshops were held throughout campus on Friday and Saturday, such as this one in the MIT Media Lab.
Credits: Photo: Casey Atkins

Caption:
During the Innovation Marketplace, student teams from MIT and other universities around the world pitched startup and research ideas to attendees, who voted for their favorites. Teams with the most votes earned cash and other prizes.
Credits:
Photo: Casey Atkins

Caption:
Various workshops were held throughout campus on Friday and Saturday, such as this one in the MIT Media Lab.
Credits:
Photo: Casey Atkins

This weekend, an MIT-hosted conference convened inventive minds from around the world to learn about — and collaborate on — actionable research and innovations that can help solve global issues, such as poverty, infectious disease, and food security.

From Thursday through Saturday, participants attended more than 30 sessions and workshops that focused on four general areas: enabling and building innovation ecosystems, producing actionable research, measuring impact and generating evidence, and creating the next generation of practitioners and partnerships. There was also a competition for research and startup teams, from MIT and around the world, that are developing innovative methods and technologies to fix global problems.

A primary aim of the conference, said Ticora Jones ’00, the MIT alumna who co-created HESN in 2012 and now serves as its chief, is to provide an open platform for collaborations among universities, governments, the private sector, and local communities, to better scale breakthrough ideas. “Part of what we’d like people to take away from the conference is a growing sense of community around the challenges of global development, the problems people face within poverty, and what we can do about them — what we as citizens of the globe, what we as community members, what we as universities can actually do about that, who we should be partnering with … to tackle these challenges,” Jones told MIT News. “

Now in its fifth year and held for the first time at MIT, TechCon also stresses how research can lead to global change, if conducted with an eye toward application. “That research you produce should be actionable, and targeted toward implementation,” said Jones. “That kind of work is necessary for us as a society going forward.” Several partnerships have since formed from the conference, she added.

HESN is a partnership between the USAID’s Global Development Lab and development labs at seven universities across the globe, including two at MIT: the International Development Innovation Network (IDIN), run by D-Lab, and the Comprehensive Initiative on Technology Evaluation (CITE), run by the Department of Urban Studies and Planning. The aim is to scale science- and tech-based solutions to the world’s most challenging development problems.

HESN’s mission aligns with MIT’s, said MIT President L. Rafael Reif, who offered welcoming remarks to a capacity crowd in the Wong Auditorium in Building E51. MIT’s collaboration with USAID’s HESN follows other historic partnerships between the Institute and the U.S. government, including on national defense projects during World War II and in helping NASA put a man on the moon, Reif said.

In speaking about the IDIN and CITE, both founded in 2012, Reif said, “Together, these labs exemplify two things we love at MIT: hands-on, real-world problem solving, and data-driven decision-making to solve serious human problems.”

IDIN engages people living in poverty to develop their own solutions to challenges they face. So far, the program has enabled 800 innovators in 62 countries to design and develop technologies and early-stage ventures. D-Lab students also work with communities to gain hands-on innovation experience. CITE provides evidence for data-driven decision making about the use of technologies in global development. For instance, using scientific findings on gaps in Indian water-filter market, mechanical engineering professor Rohit Karnik developed a low-cost water filter made out of a tree branch. CITE has also produced technical evaluations on solar lanterns, food safety, and water-test kits, among other technologies across the developing world.

Saying that ingenuity is found the world over, but many times innovators don’t have the opportunity to connect, Reif concluded, “I hope this conference presents you with many chances to tap into each other’s ingenuity, to forge new partnerships, and to translate inspiration into action.”

Moving from innovation to impact

The wide range of session and workshop topics included: building a “lean” startup for international development; using technology to reduce food loss for small-hold farmers; launching innovation hubs in Africa; building community spaces and makerspaces around the world; using data to drive policy in low-income countries; new technologies to aid in delivering medical supplies; and the rise of mobile connectivity and mobile commerce in Africa.

A keynote panel moderated by Boston Globe business columnist Scott Kirsner — which included speakers from MIT, Olin College, Georgia Tech, and the Self Employed Women’s Association of India — focused on how higher education institutions and other organizations can help tech entrepreneurs accelerate innovation ideas to market. In the discussion, the panelists identified challenges, such as significant funding gaps, that leave startups without means for growth.

Panelist Georgina Campbell Flatter, executive director of the MIT Legatum Center for Development and Entrepreneurship and a lecturer at the MIT Sloan School of Management, said the Legatum Center — like other colleges and universities — provides funding and resources during a startup’s earliest stages, so it can quickly commercialize technologies and find the first market.

But once student innovators leave school, Flatter said, it’s difficult for them to find seed funding, which is a roadblock for startups worldwide that needs to be addressed. “There is plenty of funding at later stages,” she said. “But when it comes to seed funding, that’s where I see the biggest gap right now, particularly in Africa and in the developing world.”

For many researchers and entrepreneurs, however, the conference offered a means to bring their innovations to fruition. Thursday’s contest, called the Innovation Marketplace, saw 39 teams from 11 countries compete for three prizes, of $1,000, $1,500, and $2,500, in two categories: research, and products and services.

For the contest, the teams — 12 in the research category and 27 in product and services — displayed posters detailing their pitches in Morss Hall. Attendees were given 10 “development dollars” to drop into envelopes at booths, as a means of voting for their favorites in both categories. The top three earners in both categories, and a couple of other prizes, were announced in the Wong Auditorium.

MIT team Sensen took home the third-place prize of $1,000 in the products and services category for developing sensors and a data-analytics platform that track usage patterns and durability of products, such as wheelchairs, in developing countries — including how often they’re used, where people travel, and how often they break. One partner, an organization that provides free wheelchairs to Indonesia, is using the data to better understand which wheelchairs will better serve different populations, and to advocate for government funding.

CITE research assistant and MIT graduate student in mechanical engineering Prithvi Sundar, who is Sensen’s chief technology officer, said the conference immersed the team in “an amazing community of people who do a lot of on-the-ground work and relate to the problem. It’s a really good opportunity to get awesome feedback from these individuals, maybe find collaboration with them, and raise our awareness within the international development community, as well.”

SAFR and another Berkeley team, ElectroSan, also won entrance into Venture Well’s E-Team Program, which provides mentorship and funding to student entrepreneurs. A team from Makerere University, mDex, won a free technical review from the American Society of Mechanical Engineers.

Simone Ahuja, author and founder of innovation strategy advisory Blood Orange, presented a framework for establishing partnerships between social ventures, corporations, and non-governmental organizations that's being developed with MIT’s Practical Impact Alliance. The most valuable part of the conference, she said, was “[t]he focus on not just ideas, but also how we implement and execute these ideas in complex systems and ecosystems — within large organizations, as well as multi-stakeholder partnerships — that are integral to the success of many global development initiatives.”