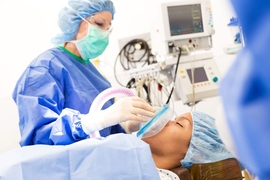 ↓ Download Image
Caption: “The process of how the neural circuits come back online following anesthesia has not really been studied in depth, and this is something that interested us from a clinical standpoint, because we are investigating ways to rapidly reverse anesthesia,” says Ken Solt, a research affiliate in the Department of Brain and Cognitive Sciences at MIT and an anesthesiologist at Massachusetts General Hospital.

Caption:
“The process of how the neural circuits come back online following anesthesia has not really been studied in depth, and this is something that interested us from a clinical standpoint, because we are investigating ways to rapidly reverse anesthesia,” says Ken Solt, a research affiliate in the Department of Brain and Cognitive Sciences at MIT and an anesthesiologist at Massachusetts General Hospital.

The use of general anesthesia for surgery has not changed fundamentally since it was first introduced 170 years ago. Patients are still left to come around in their own time following withdrawal of the drug.

However, some patients can take a considerable amount of time to wake up, holding up the use of expensive operating rooms and occupying medical staff who must keep them under close observation.

Now researchers at MIT and Massachusetts General Hospital have moved a step closer to a treatment to rapidly awaken patients after administration of a general anesthetic, following a study of the mechanism that allows people to regain consciousness.

In a paper published today in the journal PNAS, the researchers demonstrate that activating dopamine neurons in the ventral tegmental area (VTA) of the brain causes active emergence from general anesthesia.

“The process of how the neural circuits come back online following anesthesia has not really been studied in depth, and this is something that interested us from a clinical standpoint, because we are investigating ways to rapidly reverse anesthesia,” Solt says.

Ritalin is a stimulant that increases levels of the neurotransmitter dopamine, which is known to promote wakefulness. But the specific dopamine circuits in the brain that regulate arousal from an anesthetic remained unclear.

To determine the precise mechanism involved, the researchers used optogenetics to selectively activate dopamine neurons in the VTA of anesthetized mice.

The researchers first engineered dopamine neurons in the mice’s VTA to express light-sensitive proteins. They were then able to activate these specific neurons by shining blue laser light at them.

The engineered mice were placed under a steady dose of anesthetic until they were unconscious and on their backs. Lying on their back in this way is a sure sign that a rodent is unconscious, as even while asleep their righting reflex would normally cause them to flip onto their front sides to make them less vulnerable to predators.

The researchers then activated the neurons with light, causing them to release dopamine. This prompted the animals to immediately wake up and flip over, and in many cases to begin walking around.

“Dopamine neurons in the VTA are traditionally thought of as playing a key role in reward, motivation, and drug addiction but had not really been well characterized in the context of arousal,” Solt says. “But we discovered that by activating dopamine neurons in this very specific part of the brain, we were able to reverse the state of general anesthesia and wake up the animals.”

As well as freeing up valuable operating room time, developing a treatment to rapidly bring people out of anesthesia may also lessen the side effects, according to Brown.

For example, many people feel groggy after anesthesia and find that their brains do not work very well.

“We want to get the patient’s cognitive processes back to exactly where they were before they had anesthesia,” Brown says. “It’s a given that a high fraction of older patient’s brains in particular will not work as well after anesthesia.”

The researchers have also found that Ritalin can improve respiratory function, which can also be adversely affected by anesthesia.

The team has specifically targeted a small subset of neurons and can selectively activate them in animals that are still breathing anesthetic, according to Andrew Jenkins, an associate professor of anesthesiology at Emory University School of Medicine in Atlanta, who was not involved in the study. "Just by starting to activate this subset of cells they are able to reanimate the animals," Jenkins says. "The selectivity of this very small subset of neurons, and the fact that it is a complete reversal of behavior, makes this a very important paper."

The researchers are now conducting further experiments in mice to determine whether cognitive function is fully restored following anesthesia when using Ritalin.

They are also carrying out trials of Ritalin in humans, to confirm that it does accelerate recovery from general anesthetic.

“We have all seen that perfect wake-up following general anesthesia, where the patient is talking and perfectly comfortable and out of the recovery room in a very short period of time,” says Brown, who is also the associate director of MIT’s Institute for Medical Engineering and Science. “Every anesthetic should end in this way, but it will never happen if anesthesiologists stay wedded to their old processes,” he says.

“We are trying to create a new phase for anesthesia practice in which you actively turn someone’s brain back on after having general anesthesia.”

Uncovering the mechanism of our oldest anesthetic