Nanopores may be trapping oil and gas in the ancient hydrocarbon instead of allowing them to flow.
David L. Chandler | MIT News Office
Publication Date:
Press Inquiries 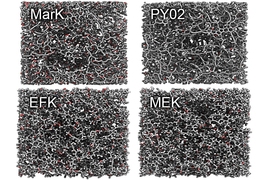 The dark-colored hydrocarbon solid known as kerogen gives rise to the fuels that power many of our daily activities: Petroleum is the source of gasoline and diesel fuels, and natural gas is used for cooking, heating, and increasingly for producing electricity.

And yet, kerogen’s basic internal structure has remained poorly understood — until now.

A new analysis, by a joint team of researchers at MIT, the French government research organization CNRS, and elsewhere, has revealed kerogen’s internal structure, in detail down to the atomic level. Their results were just published in the journal Nature Materials in a paper by MIT postdoc Colin Bousige, visiting scientist Benoit Coasne, senior research scientist Roland J.-M. Pellenq, professor Franz-Josef Ulm, and colleagues at MIT, CNRS, and other institutions.

The findings reveal important details about how gas and oil move through pores in formations deep underground, making it possible to estimate the amount of recoverable reserves more accurately and potentially pointing to better ways of extracting them.

Kerogen is a mixture of organic materials, primarily the remains of dead microbes, plants, and animals that have decomposed and been buried deep underground and compressed. This process forms a carbon-rich, rock-hard material riddled with pores of various sizes. When transformed as a result of pressure or geothermal heat, hydrocarbon molecules in the kerogen break down into gas or petroleum. These flow through the pores and can be released through drilling.

It turns out that the formula, known as the Darcy equation, that the petroleum and gas industries have traditionally used to describe the way these fluids move underground is not accurate when the hydrocarbon fluids are inside kerogen. The new understanding could change the interpretation of how some gas and oil reservoirs, often found in shale formations, actually behave.

As these fluids move through pores in the deep rock, “the flux in these nanopores, what we call the transport properties, are not what is given by the macroscale physics of liquids,” says Pellenq, a senior research scientist in the Department of Civil and Environmental Engineering at MIT and co-director, with Ulm, of the joint MIT-CNRS program called MultiScale Materials Science for Energy and Environment.

In many situations where the standard formula predicts that oil or gas will flow, in reality — and as predicted by the new model — the flow stops. The pore sizes in the rock are often smaller and less interconnected than expected, the study shows, so the individual molecules of oil or gas no longer behave collectively as fluids. Instead, they get stuck in place, like a large dog trying to crawl through a cat door.

This understanding of the nanoscale structure of pore spaces in kerogen is “a true new idea, it’s a game changer,” says Pellenq. Previously it had been assumed that the pore spaces in these deep underground formations were larger — microscale rather than nanoscale — and thus would allow the petroleum or gas to flow more easily through them. “Those nanopores were not expected by the industry,” he says.

What that reveals, he explains, is that “those molecules trapped in those pores are really trapped.” Although researchers had generally assumed that these molecules could be released from the rock simply by applying more pressure or better solvents, “these nanopores are really a big part of the porosity of kerogen,” he says, and essential for understanding the recoverability of reserves.

Right now, industry practices extract fluids from the few big pores in the fracture, Pellenq says. However this fracking process “is not even touching the real treasure, which is in the walls, in the pores of the wall.”

A better approach, the research suggests, might be to replace the conventional water-based hydrofracking solutions. “Those formations, and especially those pores, are hydrophobic, so the hydrofracking is not touching those nanopores,” Pellenq says. But “if you were change the fluids from water-based to carbon-dioxide based, we know that CO2 will go into those nanopores, because those pores are CO2-philic” (that is, carbon-dioxide attracting). This would force out at least the lighter molecules, such as the methane that is the main component of natural gas, though perhaps not the heavier molecules of petroleum.

Moving away from the use of water would be “good news” because it would reduce the need for using and then cleaning or disposing of contaminated water, according to Pellenq. In addition, it might even be a way of sequestering some carbon dioxide, he says, providing another potential bonus.

Jean-Noël Rouzaud, the CNRS research director at the geology laboratory of the Ecole Normale Supérieure in Paris, who was not involved in this research, says this work “appears me very original and of really good scientific quality.” He adds that it brings “an essential contribution to the study of non-conventional sources of hydrocarbons such as oil and gas shales. [This work] should allow people to envisage more effective and environment-friendlier techniques of recovery of hydrocarbons.”

The study also included researchers from Oak Ridge National Laboratory; the Institut de Science des Materiaux de Mulhouse in Mulhouse, France; Schlumberger-Doll Research in Cambridge, Massachusetts; the European Synchrotron Radiation Facility in Grenoble, France; and Aix Marseille University in Marseille, France. It was supported by the MIT Energy Initiative, as part of the X-Shale project funded by Shell and Schlumberger, and by the French National Research Agency through the Laboratory of Excellence (Labex) ICoME2.

Civil engineers find savings where the rubber meets the road

‘Hybrid’ nuclear plants could make a dent in carbon emissions