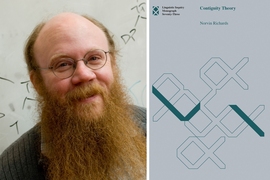 In English, declarative sentences do not usually begin with a verb. Let us suppose you are struggling in a language class, and complain about it to a friend.

“It seems like French is hard,” you say. Fair enough. Still, there is something a bit odd about that sentence: What purpose or meaning does “it” have?

“It doesn’t mean anything,” says Norvin Richards, a professor of linguistics and the Margaret MacVicar Faculty Fellow at MIT. “It’s just there to stop the sentence from starting with the verb ‘seems.’ You do that in English and you do it in French, but there are languages where you don’t do it.”

For instance: Italian, where the same complaint about your French class would likely be, “Sembra che il francese è difficile.” That starts with a verb; the Italian word “sembra” means “seems” in English. As it happens, both English and French tend not to have sentences beginning with verbs, while such sentences are normal in both Italian and Spanish.

But exactly why do languages differ in this way? Linguists who study syntax have catalogued myriad distinguishing rules and patterns among world languages — without necessarily explaining why such differences exist. But now Richards has a new explanation, detailed in his book, “Contiguity Theory,” recently published by the MIT Press.

The answer, Richards claims, is sound. That is, the sounds of languages have hugely influenced their syntax. To a greater degree than has been the case, Richards believes, we need to integrate phonology — the study of sound in language — with syntax. Then we can better grasp why languages have their specific rules.

“The claim I’m making in this book is that our explanations should start with a careful explanation of the phonology and morphology,” Richards says. When studying syntax, he says, “We’ve been missing the deepest level of explanation by insisting that we not pay attention to morphology and phonology.”

With this in mind, consider the word-order difference again between English and French, versus Spanish and Italian. In Richards’ analysis, there is a deep relationship between the sounds of these sentences and grammar involving verb tenses. Languages in which the verb’s tense is expressed in its suffix must sometimes add other words in front of those verbs, for phonological reasons.

“That suffix needs to be preceded by something to which stress is reliably assigned,” Richards observes, referring to the syllables being accented by the speaker. “So [for] Spanish and Italian verb stress, you always get stress … before the tense suffix, but stress moves around in the verb, depending on the tense.”

Thus in Spanish, the verb “cantais,” meaning “you [plural] sing,” stresses the second syllable, but in the future tense it becomes “cantereis,” with stress on the third syllable. But English and French verbs do not have a similar sensitivity to tense: English verbs like “contain” and “contained” both have stress on the second syllable, while French verbs typically have stress on the last syllable. So the latter two languages can use a subject before the verb, which speakers can put stress on — like the word “it,” in the sentence, “It seems like French is hard.”

We can account in this way for the position of verbs in sentences, Richards says, almost universally. As he details in the book, the hypothesis holds up about 98 percent of the time when examined against the World Atlas of Language Structures (WALS) database.

Similarly, Richards thinks, phonology and syntax interact in the area of what linguists call wh-movement, shifts in word order used to generate questions. Across a broad range of languages, he contends, there are universal conditions regulating the prosody — the exact pattern of intonations — of questions. This has implications for grammar.

In English, for instance, the universal conditions of question prosody result in a shuffle of words, when we turn a statement into a question. The sentence, “Steph shot a basketball,” can instead become, “What did Steph shoot?” In Japanese, by contrast, the word order does not have to change in the same way — but the intonation patterns do. In either case, the sounds we make and the syntax are bound together.

Other linguists believe Richards has made a valuable contribution by widening his argument about syntax and phonology.

Elisabeth Selkirk, a professor of linguistics emerita at the University of Massachusetts at Amherst, calls Richards’ book a “bold attempt to derive classic syntactic movements from principles that require access to prosodic structure established early in the syntax.”

Richards, for his part, says he would be “delighted if people react to this [book] right now,” but he doesn’t expect to instantly convert most colleagues. He would like other scholars to consider his argument, however.

“If you observe a movement operation [shifting the positions of words in a sentence], that’s as far as you go in syntax right now,” Richards says. “There is a lot of interesting work and extremely fruitful work being done, but then we stop. The goal of this book is to make people feel bad when they do that.”

Richards also notes he would like “to apply the theory of this book to other languages and see if it survives, or which parts do.” In particular, having now tested his theory on Tagalog, a language commonly spoken in the Philippines that he has extensively studied, he is interested in seeing how well his ideas hold up in various other languages of the Philippines, many of which are closely related to Tagalog and differ from it grammatically in ways that are straightforward to isolate and test.

Still, he thinks, syntactic analysis, for all its achievements, could become richer by consistently incorporating phonology.

“I’m trying to add another level of explanation,” Richards says.

Code of the humans

The sound and the query