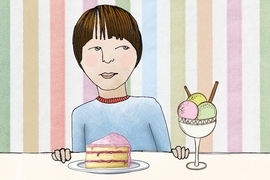 ↓ Download Image
Caption: “Children seem to interpret disjunction like conjunction,” observes MIT Linguistics Professor Danny Fox. However, Fox adds, although “it has been claimed children are very different from adults in the interpretation of logical words,” the study’s larger implication is almost the opposite — namely that “the child is [otherwise] identical to the adult, but there is a very small parameter that distinguishes them.”
Credits: Image: Christine Daniloff/MIT

Caption:
“Children seem to interpret disjunction like conjunction,” observes MIT Linguistics Professor Danny Fox. However, Fox adds, although “it has been claimed children are very different from adults in the interpretation of logical words,” the study’s larger implication is almost the opposite — namely that “the child is [otherwise] identical to the adult, but there is a very small parameter that distinguishes them.”
Credits:
Image: Christine Daniloff/MIT

Imagine, for a moment, you are a parent trying to limit how much dessert your sugar-craving young children can eat.

“You can have cake or ice cream,” you say, confident a clear parental guideline has been laid out.

But your children seem to ignore this firm ruling, and insist on having both cake and ice cream. Are they merely rebelling against a parental command? Perhaps. But they might be confusing “or” with “and,” as children do at times, something studies have shown since the 1970s. What seems like a restriction to the parent sounds like an invitation to the child: Have both!

But why does this happen? Now a study by MIT linguistics professors and a team from Carleton University, based on an experiment with children between the ages of 3 and 6, proposes a new explanation, with a twist: In examining this apparent flaw, the researchers conclude that children deploy a more sophisticated mode of logical analysis than many experts have previously realized.

Indeed, say the linguists, children use almost entirely the same approach as adults when it comes to evaluating potentially ambiguous sentences, by testing and “strengthening” them into sentences with more precise meanings, when disjunction and conjunction (“or” and “and”) are involved.

While using this common approach, however, children do not test how a sentence would change if “and” were directly substituted for “or.” This more modest procedural problem is what leads to the confusion about cake and ice cream.

“Children seem to interpret disjunction like conjunction,” observes Danny Fox, the Anshen-Chomsky Professor in Language and Thought at MIT and co-author of a paper detailing the study. However, Fox adds, although “it has been claimed children are very different from adults in the interpretation of logical words,” the study’s larger implication is almost the opposite — namely that “the child is [otherwise] identical to the adult, but there is a very small parameter that distinguishes them.”

Quirky as this finding seems, it confirms a specific prediction Fox and some other researchers had made, based on previous studies in formal semantics (the area of linguistics that investigates the logic of natural language use). As such, the study reinforces what we know about the procedures both children and adults deploy in “and/or” matters.

“There’s a certain kind of computation we can now say both children and adults do,” says Raj Singh PhD ’08, an associate professor of cognitive science at Carleton University and the lead author of the new report.

The paper, “Children interpret disjunction as conjunction: Consequences for theories of implicature and child development,” is being published in the journal Natural Language Semantics. The co-authors are Singh; Fox; Ken Wexler, emeritus professor of psychology and linguistics at MIT; Deepthi Kamawar, an associate professor of psychology at Carleton University; and Andrea Astle-Rahim, a recent PhD graduate from Carleton University.

What adults do: the two-step

To understand how children conflate “or” with “and,” first consider how adults normally clarify what sentences mean. Suppose you have a dozen cookies in a jar on your desk at work, and go to a meeting. When you come back, a colleague tells you, “Marty ate some of the cookies.”

Now suppose you find out that Marty actually ate all 12 cookies. The previous sentence — “Marty ate some of the cookies” — may still be true, but it would be more accurate to say, “Marty ate all of the cookies.”

To make this evaluation, adults compute “scalar implicatures,” a technical phrase for thinking about the implications of the logical relationship between a sentence and its alternatives. For “Marty ate some of the cookies,” there is a two-step computation. The first step is to think through some alternatives, such as what happens if you substitute “all” for “some” (leading to “Marty ate all of the cookies”). The second step is to realize that this alternative spells out a specific new meaning — that all 12 cookies have been eaten, not just a few of them.

Fox has conducted extensive research over the last decade formalizing our computations of scalar implicatures and identifying areas where tiny differences in the logical “space of alternatives” can have far-reaching consequences. The current paper stems in part from work Singh pursued as a doctoral student collaborating with Fox at MIT.

Why “or” and “and” merge for children

The research team conducted the study’s experiment by testing 59 English-speaking children and 26 adults in the Ottawa area. The children ranged in age from 3 years, 9 months, to 6 years, 4 months. The linguists gave the subjects a series of statements along with pictures, and asked them to say whether the statements were true or false.

For instance: The children were shown a picture with three boys holding  an apple or a banana, along with the statement, “Every boy is holding an apple or a banana,” and then asked to say if the statement was true or false. The children were asked to do this for a full range of scenarios — such as one boy holding one type of fruit and two boys holding the other — along with a varying set of “and/or” statements. The researchers repeated five sets of such trials, with the pictures changing each time.

The results suggest that children are computing scalar implicatures when they evaluate the statements — but they largely do not substitute disjunctions and conjunctions when testing out the possible meaning of sentences, as adults do.

That means when children hear “cake or ice cream,” they are generally not replacing “or” in the phrase with “and,” to test what would happen. Without that contrast, the children still “strengthen” the meaning of “or,” but they strengthen it to mean “and.” Thus “or” and “and” can blur together for children.

And while we tend to think children are wrong to draw that conclusion, it is still the result of computing scalar implicatures — it just happens that, as Singh observes, those computations create divergent outcomes for children and adults.

Other scholars say the study is a significant piece of research. Emmanuel Chemla, a scholar at CNRS in France, who has conducted previous research in this area, notes that the study’s “highly counterintuitive prediction” appears to be “entirely correct.” (Disclosure: Chemla has collaborated with some of the authors previously.)

Chemla also praises the study’s blend of formal semantic analysis with its experimental structure, stating that this kind of interdisciplinary approach is “often highly praised and called for, but rarely taken to such a high level.” And he adds that in the future, it will be “important to develop a full theory of how children arrive at this stage, and how they move from it to an adult-like competence.”

The researchers say they agree with the need to examine that transition to the adult pattern of strengthening. In the meantime, they hope colleagues will consider the additional evidence the study provides about the formal logic underlying our language use.

“The computational system of language is actually telling us how to do certain kinds of thinking,” Wexler suggests. “It isn’t us just trying to [understand] things pragmatically.”

Additionally, the scholars believe evidence from other languages besides English supports their conclusions. In both Walpiri, a language of indigenous Australians, and American Sign Language, there is a single connective word that functions as both “or” and “and” and appears subject to the strengthening process identified for children. And, Singh notes, linguists are now replicating the study’s findings in French and Japanese.

In general, Fox observes, across languages, and for children and adults alike, “The remarkable logical fact is that when you take ‘and’ out of the space of alternatives, ‘or,’ becomes ‘and.’ This, of course, relies on the nature of the computation that we’ve postulated, and, hence, the results of the study provide confirmation of a form that I find rather exciting.”

So, yes, your children may not understand what you mean about dessert. Or perhaps they are just being willful. But if they confuse “or” with “and,” then they are not being childish — at least not in the way you may think.

In an article for The Boston Globe, Kevin Hartnett explores a study co-authored by Prof. Danny Fox that examines why children confuse the words “and” and “or.” The researchers found that “children may conduct exactly the same logical process as adults, but arrive at different conclusions because they run that process over a narrower set of alternative sentences.”

CBC News reporter Paul Cote Jay writes about a new study co-authored by MIT researchers that examines why children often have trouble distinguishing the words “or” from “and.” Jay explains that the researchers found that while adults and children go through a similar process to interpret statements, “children are just missing one step.”