There are few things more frustrating than trying to use your phone on a crowded network. With phone usage growing faster than wireless spectrum, we’re all now fighting over smaller and smaller bits of bandwidth. Spectrum crunch is such a big problem that the White House is getting involved, recently announcing both a $400 million research initiative and a $4 million global competition devoted to the issue.

But researchers from MIT’s Computer Science and Artificial Intelligence Lab (CSAIL) say that they have a possible solution. In a new paper, a team led by professor Dina Katabi demonstrate a system called MegaMIMO 2.0 that can transfer wireless data more than three times faster than existing systems while also doubling the range of the signal. 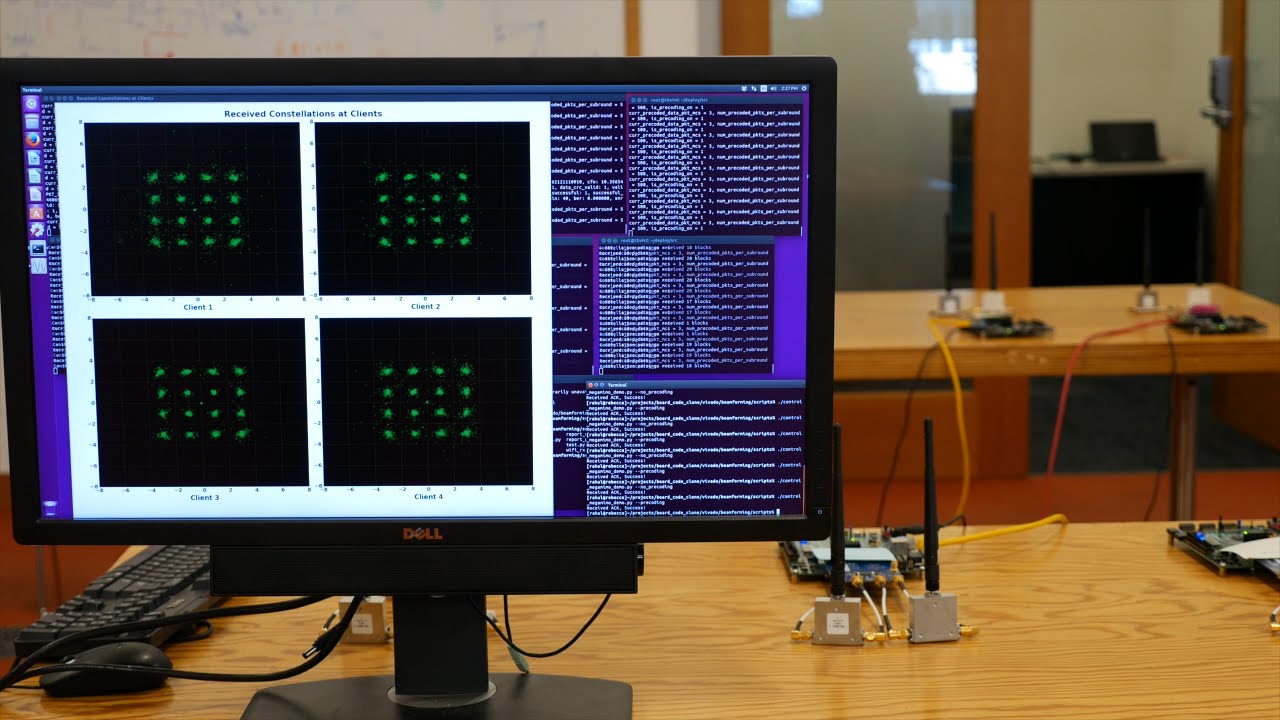 The soon-to-be-commercialized system’s key insight is to coordinate multiple access points at the same time, on the same frequency, without creating interference. This means that MegaMIMO 2.0 could dramatically improve the speed and strength of wireless networks, particularly at high-usage events like concerts, conventions and football games.

“In today’s wireless world, you can’t solve spectrum crunch by throwing more transmitters at the problem, because they will all still be interfering with one another,” says Ezzeldin Hamed, a PhD student who is lead author on a new paper on the topic. “The answer is to have all those access points work with each other simultaneously to efficiently use the available spectrum.”

To test MegaMIMO 2.0’s performance, the researchers created a mock conference room with a set of four laptops that each roamed the space atop Roomba robots. The experiments found that the system could increase the devices’ data-transfer speed 330 percent.

MegaMIMO 2.0’s hardware is the size of a standard router, and consists of a processor, a real-time baseband processing system, and a transceiver board.

Katabi and Hamed co-wrote the paper with Hariharan Rahul SM '99, PhD '13, an alum of Katabi’s group and visiting researcher with the group, as well as visiting student Mohammed A. Albdelghany. Rahul will present the paper at next week’s conference for the Association for Computing Machinery's Special Interest Group on Data Communications (SIGCOMM 16).

The main reason that your smartphone works so speedily is multiple-input multiple-output (MIMO), which means that it uses several transmitters and receivers at the same time. Radio waves bounce off surfaces and therefore arrive at the receivers at slightly different times; devices with multiple receivers, then, are able to combine the various streams to transmit data much faster. For example, a router with three antennas works twice as fast as one with two antennas.

But in a world of limited bandwidth, these speeds are still not as fast as they could be, and so in recent years researchers have searched for the wireless industry’s Holy Grail: being able to coordinate several routers at once so that they can triangulate the data even faster and more consistently.

“The problem is that, just like how two radio stations can’t play music over the same frequency at the same time, multiple routers cannot transfer data on the same chunk of spectrum without creating major interference that muddies the signal,” says Rahul.

“Since spectrum is scarce, the only way to improve wireless capacity is to add more access points and use some sort of distributed MIMO solution,” says Sachin Katti, an associate professor of electrical engineering and computer science at Stanford University who was not involved in the research. “While there has long been skepticism that this could ever work in practice, Katabi’s team has demonstrated that they can solve the many practical challenges of distributed MIMO networks.”

The team compared MegaMIMO 2.0’s performance against both a traditional WiFi system, as well as MegaMIMO 1.0, in which the user has to actively provide information (“explicit channel feedback”) about the different frequencies.

Rahul says that the group’s technology can also be applied cellular networks, meaning that it could solve similar congestion issues for people who actually want to use their phones to make calls. He says the team plans to expand MegaMIMO 2.0 to be able to coordinate dozens of routers at once, which would allow for even faster data-transfer speeds.

“This work offers a completely new way to deliver WiFi in campuses and enterprises,” says Katti. “Whereas current solutions often have slow, spotty performance, this technology has the potential to deliver high-capacity connectivity to each and every user.”

The work was funded by the National Science Foundation and supported by members of the MIT Center for Wireless Networks and Mobile Computing.

A new WiFi system developed by CSAIL researchers is three times faster than a normal wireless network, writes Thomas Tamblyn for The Huffington Post. The new system allows transmitters “to work together and make sure that they’re sending information that isn’t clashing to each device,” explains Tamblyn.

Matt McFarland writes for CNN that CSAIL researchers have created a new system that can transfer wireless data 3.3 times faster than usual. McFarland explains that to increase the speed of data transfer, researchers “developed algorithms that process a router's signal so that multiple routers can send information on the same wireless spectrum without causing interference.”