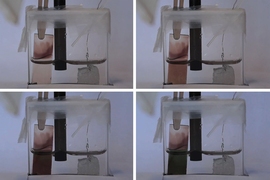 ↓ Download Image
Caption: Researchers at MIT have developed a new way of making windows that can switch from transparent to opaque using electrochromic materials. Once the glass is switched from clear to dark, or vice versa, the new system requires little to no power to maintain its new state; unlike other materials, it only needs electricity when it’s time to switch back again.

Caption:
Researchers at MIT have developed a new way of making windows that can switch from transparent to opaque using electrochromic materials. Once the glass is switched from clear to dark, or vice versa, the new system requires little to no power to maintain its new state; unlike other materials, it only needs electricity when it’s time to switch back again.
Credits:
Image: Khalid Abdulaziz Kaabi and Dennis Sheberla

A team of researchers at MIT has developed a new way of making windows that can switch from transparent to opaque, potentially saving energy by blocking sunlight on hot days and thus reducing air-conditioning costs. While other systems for causing glass to darken do exist, the new method offers significant advantages by combining rapid response times and low power needs.

Once the glass is switched from clear to dark, or vice versa, the new system requires little to no power to maintain its new state; unlike other materials, it only needs electricity when it’s time to switch back again.

The results are reported this week in the online journal Chem, in a paper by MIT professor of chemistry Mircea Dincă, doctoral student Khalid Al-Kaabi, and former postdoc Casey Wade, now an assistant professor at Brandeis University.

The new discovery uses electrochromic materials, which change their color and transparency in response to an applied voltage, Dincă explains. These are quite different from photochromic materials, such as those found in some eyeglasses that become darker when the light gets brighter. Such materials tend to have much slower response times and to undergo a smaller change in their levels of opacity.

Existing electrochromic materials suffer from similar limitations and have found only niche applications. For example, Boeing 787 aircraft have electrochromic windows that get darker to prevent bright sunlight from glaring through the cabin. The windows can be darkened by turning on the voltage, Dincă says, but “when you flip the switch, it actually takes a few minutes for the window to turn dark. Obviously, you want that to be faster.”

The reason for that slowness is that the changes within the material rely on a movement of electrons — an electric current — that gives the whole window a negative charge. Positive ions then move through the material to restore the electrical balance, creating the color-changing effect. But while electrons flow rapidly through materials, ions move much more slowly, limiting the overall reaction speed.

The MIT team overcame that by using sponge-like materials called metal-organic frameworks (MOFs), which can conduct both electrons and ions at very high speeds. Such materials have been used for about 20 years for their ability to store gases within their structure, but the MIT team was the first to harness them for their electrical and optical properties.

The other problem with existing versions of self-shading materials, Dincă says, is that “it’s hard to get a material that changes from completely transparent to, let’s say, completely black.” Even the windows in the 787 can only change to a dark shade of green, rather than becoming opaque.

In previous research on MOFs, Dincă and his students had made material that could turn from clear to shades of blue or green, but in this newly reported work they have achieved the long-sought goal of producing a coating that can go all the way from perfectly clear to nearly black (achieved by blending two complementary colors, green and red). The new material is made by combining two chemical compounds, an organic material and a metal salt. Once mixed, these self-assemble into a thin film of the switchable material.

“It’s this combination of these two, of a relatively fast switching time and a nearly black color, that has really got people excited,” Dincă says.

The new windows have the potential, he says, to do much more than just preventing glare. “These could lead to pretty significant energy savings,” he says, by drastically reducing the need for air conditioning in buildings with many windows in hot climates. “You could just flip a switch when the sun shines through the window, and turn it dark,” or even automatically make that whole side of the building go dark all at once, he says.

While the properties of the material have now been demonstrated in a laboratory setting, the team’s next step is to make a small-scale device for further testing: a 1-inch-square sample, to demonstrate the principle in action for potential investors in the technology, and to help determine what the manufacturing costs for such windows would be.

Further testing is also needed, Dincă says, to demonstrate what they have determined from preliminary testing: that once the switch is flipped and the material changes color, it requires no further power to maintain its new state. No extra power is needed until the switch is flipped to turn the material back to its former state, whether clear or opaque. Many existing electrochromic materials, by contrast, require a continuous voltage input.

In addition to smart windows, Dincă says, the material could also be used for some kinds of low-power displays, similar to displays like electronic ink (used in devices such as the Kindle and based on MIT-developed technology) but based on a completely different approach.

Omar K. Farha, a research professor of chemistry at Northwestern University who was not involved in this project, says, “Every time I open a new paper from the Dincă group, I am guaranteed to read about wonderful discoveries and well-executed science, and this paper no different.” He adds that given this material’s relatively rapid switching time, “I see no reason why the next generation Dreamliner [787] can’t use MOFs for its electrochromic windows.”

Not surprisingly perhaps, the research was partly funded by an organization in a region where such light-blocking windows would be particularly useful: The Masdar Institute, based in the United Arab Emirates, through a cooperative agreement with MIT. The research also received support from the U.S. Department of Energy, through the Center for Excitonics, an Energy Frontier Center.

CNBC reporter Robert Ferris writes that MIT researchers have developed new technology that could allow windows to shift from transparent to opaque. “Solutions such as these could greatly reduce the demand for air conditioning, which is currently booming around the world,” writes Ferris.

A glow of recognition