Robert Fano, computing pioneer and founder of CSAIL, dies at 98 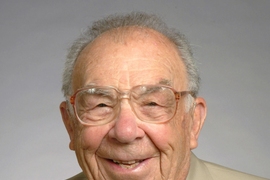 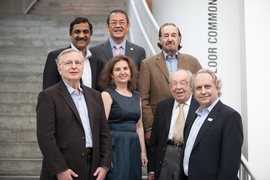 Robert “Bob” Fano, a professor emeritus in the Department of Electrical Engineering and Computer Science (EECS) whose work helped usher in the personal computing age, died in Naples, Florida on July 13. He was 98.

During his time on the faculty at MIT, Fano conducted research across multiple disciplines, including information theory, networks, electrical engineering and radar technologies. His work on “time-sharing” — systems that allow multiple people to use a computer at the same time — helped pave the way for the more widespread use of computers in society.

Much of his early work in information theory has directly impacted modern technologies. His research with Claude Shannon, for example, spurred data-compression techniques like Huffman coding that are used in today’s high-definition TVs and computer networks.

In 1961, Fano and Fernando Corbató, professor emeritus in EECS, developed the Compatible Time-Sharing System (CTSS), one of the earliest time-sharing systems. The success of CTSS helped convince MIT to launch Project MAC, a pivotal early center for computing research for which Fano served as its founding director. Project MAC has since dramatically expanded to become MIT’s largest interdepartmental research lab, the Computer Science and Artificial Intelligence Laboratory (CSAIL).

“Bob did pioneering work in computer science at a time when many people viewed the field as a curiosity rather than a rigorous academic discipline,” CSAIL Director Daniela Rus says. “None of our work here would have been possible without his passion, insight, and drive."

Looking Back: 50 Years of Computer Science at MIT

Fano was the Ford Professor of Engineering in EECS and a dedicated teacher who would often labor into the late hours of the morning, working on new lectures. He was also a member of multiple research labs at MIT, including the Laboratory for Computer Science, the Research Laboratory for Electronics, the MIT Radiation Laboratory, and the MIT Lincoln Laboratory. He helped create MIT’s first official curriculum for computer science, which is now the most popular major at the Institute.

In many respects, Fano was one of the world’s first open-source advocates. He frequently described computing as a public utility that, like water or electricity, should be accessible to all. His writings in the 1960s often discussed computing’s place in society, and predated today’s debates about the ethical implications of technology.

“One must consider the security of a system that may hold in its mass memory detailed information on individuals and organizations,” he wrote in a 1966 paper he co-authored with Corbató. “How will access to the utility be controlled? Who will regulate its use?”

A native of Italy, Fano studied at the School of Engineering of Torino before moving to the United States in 1939. He earned both his bachelor’s degree (1941) and his doctorate (1947) from MIT in electrical engineering, and was a member of the MIT faculty from 1947 until 1984.

During World War II, Fano worked on microwave components at the MIT Radiation Laboratory and on radar technologies at the Lincoln Lab. He also served as associate head of EECS from 1971 to 1974.

He is survived by his daughters Paola Nisonger SM ’79, Linda Ryan SM ’82, and Carol Fano, as well as five grandchildren.

A memorial to celebrate his life will be held at the MIT Stata Center on Friday, Nov. 4. Please contact events@csail.mit.edu if you wish to receive further program details as they become available.

Prof. Emeritus Robert Fano, known for his instrumental work in the development of interactive computers, died on July 13 at age 98, reports John Markoff for The New York Times. Markoff writes that Fano made “fundamental theoretical advances, both in the ways computers handled information and in the design of interactive software.”