Caption:
In one hand, senior research engineer Paul Woskov holds orange water cooling lines that lead to the rock test chamber (left foreground), and in the other the result of drilling rock with a gyrotron beam.
Credits:
Photo: Paul Rivenberg

Paul Woskov is collecting rocks. A growing number of granite and basalt squares perch on cabinet tops and shelves around his office, each a record of his latest experiment in drilling. Some show clean circles that fully penetrate the rock, while others hold glassy craters.

Woskov, a senior research engineer at MIT’s Plasma Science and Fusion Center (PSFC), is using a gyrotron, a specialized radio-frequency (RF) wave generator developed for fusion research, to explore how millimeter RF waves can open holes through hard rock by melting or vaporizing it. Penetrating deep into hard rock is necessary to access virtually limitless geothermal energy resources, to mine precious metals, or explore new options for nuclear waste storage. But it is a difficult and expensive process, and today’s mechanical drilling technology has limitations. Woskov believes that powerful millimeter-wave sources could increase deep hard rock penetration rates by more than ten times at lower cost over current mechanical drilling systems, while providing other practical benefits.

“There is plenty of heat beneath our feet,” he says, “something like 20 billion times the energy that the world uses in one year.” But, Woskov notes, most studies of the accessibility of geothermal energy are based on current mechanical technology and its limitations. They do not consider that a breakthrough advance in drilling technology could make possible deeper, less expensive penetration, opening into what Woskov calls “an enormous reserve of energy, second only to fusion: base energy, available 24/7.” 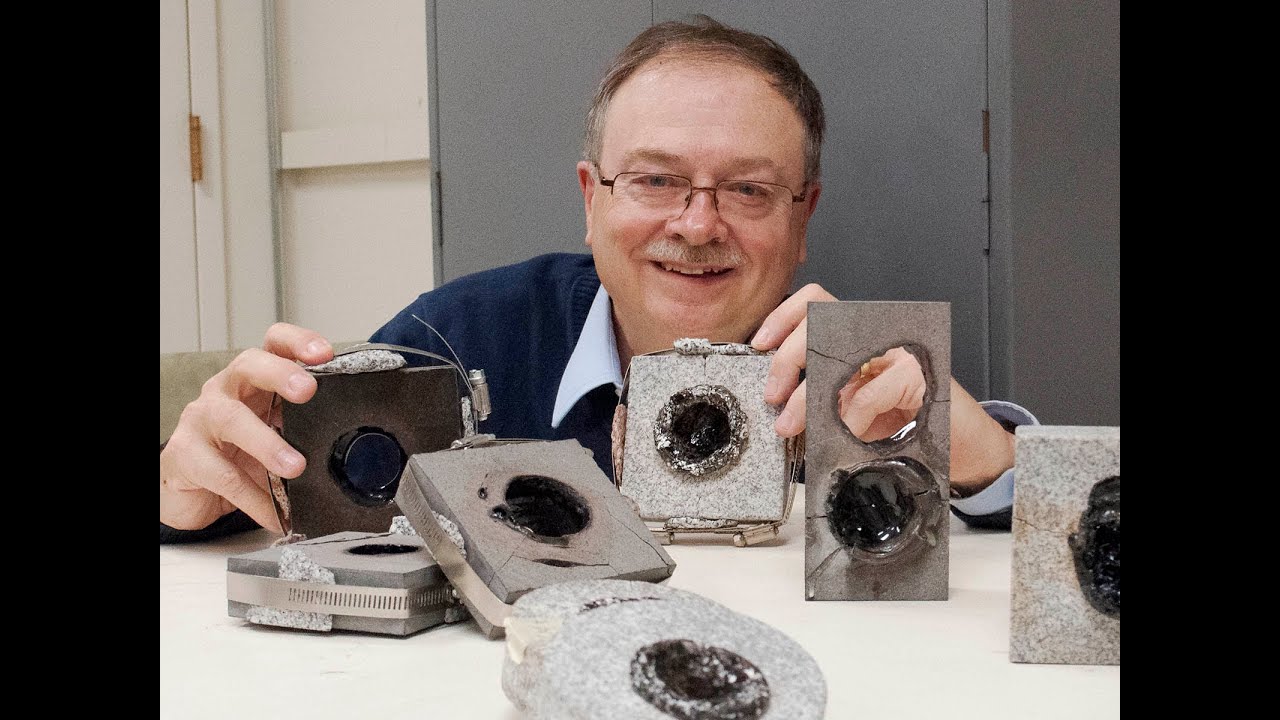 Current rotary technology is a mechanical grinding process that is limited by rock hardness, deep pressures, and high temperatures. Specially designed “drilling mud,” pumped through the hollow drill pipe interior, is used to enable deep drilling and to remove the excess cuttings, returning them to the surface via the ring-shaped space between the drill pipe and borehole wall. The pressure of the mud also keeps the hole from collapsing, sealing, and strengthening the hole in the process. But there is a limit to the pressures such a borehole can withstand, and typically holes cannot be drilled beyond 30,000 feet (9 km).

Woskov laughs when he reveals that drilling engineers have a hard time believing his technology does not use the costly drilling mud they depend on. But, he explains, with a gyrotron, high-temperature physics will replace the mechanical functions of low-temperature mud, allowing drillers to extract rock matter through vaporization or displace the melt through pressurization. Similarly, the high temperature melted rock will seal the walls of the borehole, and the high pressure from the increased temperature will prevent collapse. In principle, because an increase in temperature in a confined volume will always result in an increase in pressure over local pressure, drillers could maintain the stability of a borehole to greater depths than possible with drilling muds.

Woskov observes yet another advantage: “Our beams don’t need to be round. Forces underground are anisotropic — not symmetrical. That is one reason holes collapse. But we can shape our beam to respond to local pressures. You can create an elliptical hole with the major axis corresponding to the anisotropy of the forces, essentially recovering the strength of a round hole in a symmetrical force field.”

Later this spring, the researcher is planning to move his base of operation from the PSFC to the Air Force Research Lab (AFRL) in Kirkland, New Mexico, in order to take advantage of a microwave source that would allow him to perform experiments at a power level a factor of 10 higher than is currently possible in the laboratory at MIT. He would be able to graduate from drilling rocks in the 4-6 inch range to those in the 2-4 feet range. He is especially interested in exploring how well the rock can be vaporized, which would only be possible with the higher power available at AFRL.

Support for this project originally came from MIT Energy Initiative (MITEI), which in 2008 provided seed money and later a follow-up grant. Although Woskov continues to pursue ways his technology can advance geothermal energy research, his current support is from the Department of Energy's Office of Nuclear Science, through Impact Technologies LLC, which funds him to explore deep bore hole storage of radioactive and nuclear wastes. At 6 km deep, such bore holes would place waste much farther from the biosphere than is possible with near-earth depositories such as Yucca Mountain. The bottom 2 kilometers of the hole would hold waste, capped with a 2-km seal — which is currently considered the “weak link” in the process. Woskov is experimenting with melted basalt and the more viscous granite to learn how he can seal the holes with melted rock, which could provide the most secure entombment of the waste products.

Woskov, who joined MIT’s Francis Bitter Magnet Laboratory in 1976 before becoming a founding member of the Plasma Fusion Center in 1979, is approaching his 40th anniversary at MIT. The first three decades of his tenure focused heavily on high-power far infrared scattering for measuring energy distribution of fast ions, the product of fusion reactions. The exploration took much longer than anyone anticipated, but when it eventually found success in Europe on the TEXTOR tokamak reactor, Woskov was left looking for a new direction.

While still pursuing fusion, he began exploring some spinoff technologies that could be realized in a matter of years rather than decades. He received one R&D 100 Award after another for a series of projects: a thermometer for measuring temperatures in high-temperature furnaces; a hazardous waste emissions monitor for incinerators and power pants; a device to monitor molten metals: all experiments that used developments in fusion research to address shorter-term problems.

“Occasionally you have to do something that has a near-term reward,” Woskov laughs, noting that it can be frustrating when you work on something for 30 years without a final product.

The beauty that long-term fusion research has provided the technology for so many exciting short-term projects is not lost on Woskov. And he notes with amusement that so much fusion research revolves around protecting materials in fusion devices from being damaged by hot plasma, while his current project exploits the high energy of fusion technology to see how effectively it can melt materials.

Woskov foresees a number of other uses for the microwave technology. The high-temperature pressures of microwaves could be used to break apart rocks for mining, or excavate rock to create tunnels and canals. It could also be used for fracking in place of pressurized water, which is controversial due to its limited supply and resulting water contamination.

“Energy trumps matter,” Woskov proclaims, excited by how microwave heat and pressure could literally move mountains, or at least pieces of them. For now he’s going to continue melting his way through the earth’s crust, one rock at a time.