New clue to how lithium works in the brain 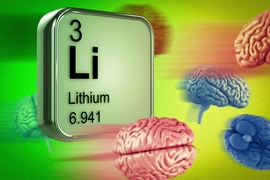 ↓ Download Image
Caption: “How lithium acts on the brain has been this great mystery of psychopharmacology,” says Joshua Meisel, an MIT postdoc and lead author of a new study. “There are hypotheses, but nothing’s been proven.”

Caption:
“How lithium acts on the brain has been this great mystery of psychopharmacology,” says Joshua Meisel, an MIT postdoc and lead author of a new study. “There are hypotheses, but nothing’s been proven.”
Credits:
Illustration: Jose-Luis Olivares/MIT

Since the 1970s, U.S. doctors have prescribed lithium to treat patients with bipolar disorder. While the drug has a good success rate, scientists are still unsure exactly how it achieves its beneficial effects.

MIT biologists have now discovered a possible explanation for how lithium works. In a study of worms, the researchers identified a key protein that is inhibited by lithium, making the worms less active.

While these behavioral effects in worms can’t be translated directly to humans, the results suggest a possible mechanism for lithium’s effects on the brain, which the researchers believe is worth exploring further.

“How lithium acts on the brain has been this great mystery of psychopharmacology,” says Joshua Meisel, an MIT postdoc and lead author of the study. “There are hypotheses, but nothing’s been proven.”

Dennis Kim, an associate professor of biology, is the senior author of the paper, which appears in the July 7 issue of Current Biology.

Lithium’s ability to act as a tranquilizer for people suffering from mania and bipolar disorder was discovered in 1949 by the Australian psychiatrist John Cade, but the drug was not approved by the U.S. Food and Drug Administration until 1970.

Lithium interacts with many proteins and other molecules in the brain, so it has been difficult for scientists to determine which of these interactions produce mood stabilization. Some of the hypothesized targets are an enzyme that produces inositol, a simple sugar involved in cell signaling, and an enzyme called GSK3, which inactivates other proteins. However, no studies have conclusively linked these targets to lithium’s effects on bipolar patients.

The MIT team did not set out to study lithium but fell upon it while exploring interactions between Caenorhabditis elegans and its microbial environment. This worm has a simple nervous system consisting of 302 neurons, most of which occur in pairs.

In a paper published in 2014, Meisel and Kim discovered that a pair of neurons known as ASJ neurons are necessary for the worm’s avoidance of harmful bacteria. Previous studies from other labs had shown that the ASJ neurons are also required for reawakening from a starvation-induced hibernation state. This reactivation, known as the dauer exit, occurs when food becomes more plentiful.

As a follow-up to that study, the researchers performed a genetic screen in which they looked for mutated genes that disrupt ASJ neurons. To their surprise, one of the genes implicated by this screen was one that codes for a protein called BPNT1, which was already known to be inhibited by lithium.

BPNT1 is a protein that removes phosphate groups from a compound known as PAP, a process that is critical to maintaining normal cell function.

When the researchers knocked out the gene for BPNT1, they found that the ASJ neurons entered a dormant state and the worms could no longer execute either avoidance behavior or the dauer exit. They also found the same behavioral effects in worms treated with lithium.

John York, a professor of biochemistry at Vanderbilt University School of Medicine, says the findings are intriguing.

“This is an important step in showing a neural function for BPNT-1. It’s the first study to show in a multicellular system that the BPNT-1 protein might be the target for lithium’s action,” says York, who was not involved in the research.

The findings suggest that lithium treatment silences activity in neurons that rely on BPNT1, which Meisel and Kim found intriguing because many human brain cells also depend on this protein. In humans, PAP, which BPNT1 degrades, is usually found in neurons that secrete dopamine, epinephrine, or norepinephrine, which are all neurotransmitters that stimulate brain activity.

“We think that it’s perfectly reasonable to add BPNT1 onto the list of hypotheses for how lithium is affecting the brain,” Meisel says. “Silencing dopaminergic neurons I would think would make you less manic because of how dopamine affects the brain.”

While Kim’s lab focuses on worms, the researchers hope that other labs will test the new hypothesis in other animals.

“Establishing that this happens in C. elegans, by no means does it prove how lithium works in humans, but it provides a very solid experimental foundation for exploring a hypothesis that lithium might have therapeutic effects in specific neurons through inhibition of BPNT1,” Kim says. “We hope that other groups that work on mammalian systems may be interested to explore this question further.”

How neurons lose their connections

A worm’s-eye view of immunity

Unraveling how a mutation can lead to psychiatric illness