A decorated swimmer and engineer, Guo is the first MIT student-athlete and just the fourth Division III student-athlete to ever receive the honor.
Watch Video
DAPER
Publication Date:

Caption:
“This award speaks to how MIT is not only an amazing academic institution with cutting-edge research, but also a place where students can explore their passions in many different dimensions,” Margaret Guo '16 said upon accepting the 2016 NCAA Woman of the Year award. Guo, who recently earned dual degrees in electrical engineering and computer science and in biological engineering, posted an impressive career as a swimmer for MIT.
Credits:
Photo courtesy of the NCAA.

Caption:
Margaret Guo '16 reacts to being announced as the NCAA Woman of the Year. Guo is only the fourth Division III student-athlete to win this award, one of the NCAA's highest honors.
Credits:
Photo courtesy of the NCAA.

On Sunday evening in Indianapolis, former MIT swimmer Margaret Guo '16 was named as the 2016 NCAA Woman of the Year award winner in a ceremony held at the Westin Hotel. One of the highest honors awarded annually by the NCAA, Guo is the first MIT student-athlete and just the fourth Division III student-athlete to ever receive this honor. She was one of nine finalists for the award, spanning over Divisions I, II, and III.

“Everything feels super surreal right now and it's hard to describe exactly how I'm feeling,” said Guo. “MIT is a super special place. And though there were a lot of sleepless nights and substantial obstacles along the way, overall, it was a very nurturing, collaborative environment that I love and have thrived in. I'm super proud to have represented MIT for the last four years as a scholar-athlete and grateful for all the support and mentorship that I've received over the past few years. It's these people who have made my MIT experience so unforgettable and who continually push me to become better versions of myself. For me, this award speaks to how MIT is not only an amazing academic institution with cutting-edge research but also a place where students can explore their passions in many different dimensions.” 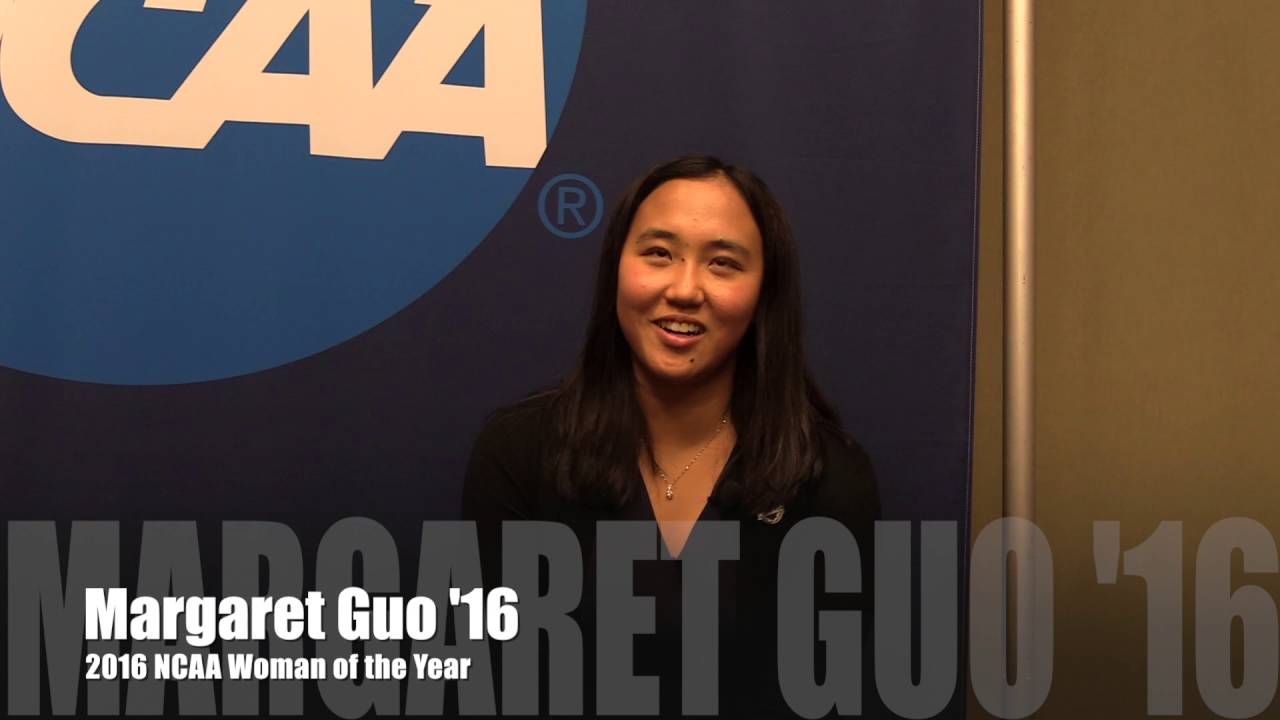 Play video
Former MIT swimmer Margaret Guo '16 was named as the 2016 NCAA Woman of the Year in a ceremony in Indianapolis, Indiana, on Oct. 16.

"Margaret being named the NCAA’s Woman of the Year is incredible,” said MIT Chancellor Cynthia Barnhart. “MIT Athletic Director Julie Soriero, Head Coach Dani Korman, the entire DAPER community, and I are so ecstatic for and proud of her.”

“The fact that Margaret is the first MIT student-athlete to receive this significant award makes her hard work in and out of the pool as well as our community’s support for her all the more special,” Barnhart added. “This honor caps off a career at the Institute marked by impressive athletic and academic excellence and community service. Margaret and the DAPER teammates and staff that guided her and rooted for her along the way should really enjoy this moment. They are excellent examples of what it means to dedicate oneself to a sport and to a team, and they serve as exceptional role models for all of our student-athletes.”

The NCAA Woman of the Year program honors the academic achievements, athletics excellence, community service, and leadership of graduating female college athletes from all three NCAA divisions. To be eligible, nominees must have competed and earned a varsity letter in an NCAA-sponsored discipline, must have completed eligibility in their primary sport, and must be nominated by their member school.

“I am extremely proud of Margaret and very pleased that she has received this incredible honor,” said Julie Soriero, MIT director of athletics. “Margaret’s accomplishments in and out of the pool while at MIT were unparalleled as she excelled athletically, as well as in the classroom with a perfect 5.0 GPA. She is a young woman who was able to take advantage of everything that MIT has to offer and she should be extremely proud of herself for receiving this wonderful recognition this evening.”

Guo was selected for this award from over 215,000 NCAA female student-athletes, including a record 517 nominees for the 2016 award. At MIT, she was a six-time NEWMAC All-Conference honoree, a two-time NCAA All-American and a three-time NCAA All-America Honorable Mention recipient. Graduating with a dual degree in electrical engineering and computer science and in biological engineering with a perfect 5.0 grade point average, Guo was also the 2016 CoSIDA Academic All-America Athlete of the Year. An Academic All-America recipient in 2015 and 2016, she also won the Arthur Ashe Jr. Sports Scholar Award, the NCAA Elite 89 Award, and was a Rhodes finalist and Goldwater Scholar.

“For Margaret to receive this honor is a testament to how hard she worked as a student-athlete both in and out of the pool during her tremendous four years at MIT,” said Mary Frances Wagley '47 Head Coach Dani Korman. “To see her recognized on the national level is something that our program is very proud of and what she has been able to accomplish epitomizes everything that I want my student-athletes to be. The support from the Institute allowed Margaret to take full advantage of her opportunities at MIT, and now she is taking that into her career as she continues her passion for helping others.”

In addition, Guo currently holds two patent-pending recognitions and is a co-author on two scholarly articles. She was also a software intern in HPI Engineering at Intuitive Surgical and earned the Intel Scholarship and the GE Women’s Network Scholarship.

MIT alumna Margaret Guo was named the 2016 NCAA Woman of the Year during a ceremony in Indianapolis, reports Emily McCarthy for The Boston Globe. Guo says the award “reflects the amount of support I’ve had and the people around me who have pushed me to become better than I could have been by myself.”