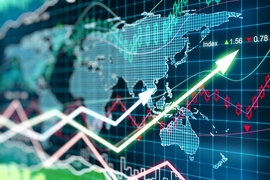 ↓ Download Image
Caption: After the financial-sector crisis in 2007 and 2008, a large portion of investments people had considered safe were suddenly understood to be risky. And yet, the ensuing flight to safe assets, such as U.S. debt, has come with its own cost.

Caption:
After the financial-sector crisis in 2007 and 2008, a large portion of investments people had considered safe were suddenly understood to be risky. And yet, the ensuing flight to safe assets, such as U.S. debt, has come with its own cost.
Credits:
Image: MIT News

Unless you’ve been following the subject closely, you may not have heard of one of the biggest barriers slowing the revival of global economic growth over the last decade. That would be the “safety trap,” a problem arising from a lack of low-risk investments around the world.

To see the problem, recall that after the financial-sector crisis in 2007 and 2008, a large portion of investments people had considered safe — mortgage-backed securities come to mind — were suddenly understood to be risky. And yet, the ensuing flight to safe assets, such as U.S. debt, has come with its own cost. The increased demand for these safer investments keeps interest rates at low levels, to the point where central bankers cannot spur additional economic output by further lowering those rates. This is the “trap” part of the safety trap.

In recently published research, MIT economist Ricardo Caballero and two colleagues have described in new detail how the safety trap works. The paper also highlights a subtle policy implication: The lack of safe assets is a consummately international problem, but the resulting safety trap itself can be remedied by policy initiatives from individual countries.

“The shortage of safe assets is a global phenomenon,” Caballero notes, in explaining how interest rates become lowered globally. “Movements in safe [yield] rates in one important economy quickly spread into changes in the same direction in the rest of the world.”

But by the same token, Caballero believes, national remedies for the safety trap cross borders as well.

“Policies that increase the net supply of safe assets somewhere are output-enhancing everywhere,” Caballero and two colleagues write in their new paper, which introduces a new model of an open global economy in safety-trap conditions.

Trapped at the ZLB

The full extent to which the global availability of safe assets has diminished since the financial crisis is difficult to determine and depends on how various asset classes are defined. That said, Caballero notes, some observers think the supply of safe assets has declined by about 50 percent in the last decade.

U.S.-issued federal debt remains the safe asset par excellence for investors, since, as Caballero puts it, a lasting “default by the U.S. Treasury seems inconceivable, and it is a very large and liquid market.”

But consider the complications of this scenario, in which investors flee from other kinds of assets to government debt. Because more investors want to purchase government debt, governments can issue that debt at lower interest rates. The global nature of the current shortage then creates this effect in all countries where debt is considered safe.

And that creates a further problem. Central banks lower interest rates to stimulate growth (by making borrowing cheaper). But when interest rates get low enough they hit what economists call the Zero Lower Bound (ZLB), which puts an end to further interest-rate reductions. Output weakens, demand shrinks, and growth sputters. This has happened in many major countries in recent years.

And yet, as the researchers note, there is a way out of this bind. Or multiple ways, since, as Caballero suggests, the best policy initiative “depends on the specific time and circumstances of the issue country.” One solution is issuing more debt: This is what the U.S. did to produce growth in 2009, for example.

But countries do have other options, such as orchestrating swaps of safe government bonds for risky assets held by banks. “Perhaps some of that could be done in Italy today if they find a way to securitize the loans in banks’ balance sheets,” Caballero says.

Will the shortage get worse?

Other economists have found the research of Caballero, Farhi, and Gourinchas to be a notable contribution to the field. Gary Gorton of Yale University, a leading finance economist, repeatedly cites the work of the trio in a recent working paper summarizing the subject, “The History and Economics of Safe Assets.” As Gorton notes, Caballero and his co-authors have also observed that “countries differ in their ability to produce safe financial assets for storing value,” an imbalance that  helps make the search for low-risk assets a global one.

Indeed, as Caballero, Farhi, and Gourinchas continued their work on the subject, they addressed the problem of safe-asset creation in a working paper issued in 2016, “The Safety Trap.” Developing countries that do not have a lot of safe assets tend to be growing faster than mature economies that do produce safe assets. Thus, as they write, “the shortage of safe assets is only likely to worsen over time.”

But why exactly is this? If a country’s economy is growing, why will its safe assets grow more slowly, in relative terms?

“Producing output from physical capital is a lot easier than producing safe assets from it,” Caballero explains. “The latter requires institutions that take decades to develop.”

So, for instance, countries need stable systems of issuing debt and good track records to produce safe assets and attract investors. Or, as Caballero notes, “One can imagine that China will one day be a powerhouse of [safe] asset production, but for now output and hence income is growing faster than those assets.”