Hybrid system could cut coal-plant emissions in half 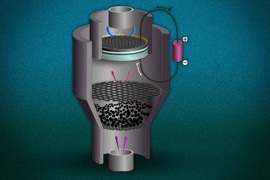 ↓ Download Image
Caption: This illustration depicts a possible configuration for the combined system proposed by MIT researchers. At the bottom, steam (pink arrows) passes through pulverized coal, releasing gaseous fuel (red arrows) made up of hydrogen and carbon monoxide. This fuel goes into a solid oxide fuel cell (disks near top), where it reacts with oxygen from the air (blue arrows) to produce electricity (loop at right).

Caption:
This illustration depicts a possible configuration for the combined system proposed by MIT researchers. At the bottom, steam (pink arrows) passes through pulverized coal, releasing gaseous fuel (red arrows) made up of hydrogen and carbon monoxide. This fuel goes into a solid oxide fuel cell (disks near top), where it reacts with oxygen from the air (blue arrows) to produce electricity (loop at right).
Credits:
Illustration: Jeffrey Hanna

Most of the world’s nations have agreed to make substantial reductions in their greenhouse gas emissions, but achieving these goals is still a considerable technological, economic, and political challenge. The International Energy Agency has projected that, even with the new agreements in place, global coal-fired power generation will increase over the next few decades. Finding a cleaner way of using that coal could be a significant step toward achieving carbon-emissions reductions while meeting the needs of a growing and increasingly industrialized world population.

Now, researchers at MIT have come up with a plan that could contribute to that effort by making it possible to generate electricity from coal with much greater efficiency — possibly reaching as much as twice the fuel-to-electricity efficiency of today’s conventional coal plants. This would mean, all things being equal, a 50 percent reduction in carbon dioxide emissions for a given amount of power produced.

The concept, proposed by MIT doctoral student Katherine Ong and Ronald C. Crane (1972) Professor Ahmed Ghoniem, is described in their paper in the Journal of Power Sources. The key is combining into a single system two well-known technologies: coal gasification and fuel cells.

Coal gasification is a way of extracting burnable gaseous fuel from pulverized coal, rather than burning the coal itself. The technique is widely used in chemical processing plants as a way of producing hydrogen gas. Fuel cells produce electricity from a gaseous fuel by passing it through a battery-like system where the fuel reacts electrochemically with oxygen from the air.

The attraction of combining these two systems, Ong explains, is that both processes operate at similarly high temperatures of 800 degrees Celsius or more. Combining them in a single plant would thus allow the two components to exchange heat with minimal energy losses. In fact, the fuel cell would generate enough heat to sustain the gasification part of the process, she says, eliminating the need for a separate heating system, which is usually provided by burning a portion of the coal.

Coal gasification, by itself, works at a lower temperature than combustion and “is more efficient than burning,” Ong says. First, the coal is pulverized to a powder, which is then heated in a flow of hot steam, somewhat like popcorn kernels heated in an air-popper. The heat leads to chemical reactions that release gases from the coal particles — mainly carbon monoxide and hydrogen, both of which can produce electricity in a solid oxide fuel cell.

In the combined system, these gases would then be piped from the gasifier to a separate fuel cell stack, or ultimately, the fuel cell system could be installed in the same chamber as the gasifier so that the hot gas flows straight into the cell. In the fuel cell, a membrane separates the carbon monoxide and hydrogen from the oxygen, promoting an electrochemical reaction that generates electricity without burning the fuel.

Because there is no burning involved, the system produces less ash and other air pollutants than would be generated by combustion. It does produce carbon dioxide, but this is in a pure, uncontaminated stream and not mixed with air as in a conventional coal-burning plant. That would make it much easier to carry out carbon capture and sequestration (CCS) — that is, capturing the output gas and burying it underground or disposing of it some other way — to eliminate or drastically reduce the greenhouse gas emissions. In conventional plants, nitrogen from the air must be removed from the stream of gas in order to carry out CCS.

One of the big questions answered by this new research, which used simulations rather than lab experiments, was whether the process would work more efficiently using steam or carbon dioxide to react with the particles of coal. Both methods have been widely used, but most previous attempts to study gasification in combination with fuel cells chose the carbon dioxide option. This new study demonstrates that the system produces two to three times as much power output when steam is used instead.

Conventional coal-burning power plants typically have very low efficiency; only 30 percent of the energy contained in the fuel is actually converted to electricity. In comparison, the proposed combined gasification and fuel cell system could achieve efficiencies as high as 55 to 60 percent, Ong says, according to the simulations.

The next step would be to build a small, pilot-scale plant to measure the performance of the hybrid system in real-world conditions, Ong says. Because the individual component technologies are all well developed, a full-scale operational system could plausibly be built within a few years, she says. “This system requires no new technologies” that need more time to develop, she says. “It’s just a matter of coupling these existing technologies together well.”

The system would be more expensive than existing plants, she says, but the initial capital investment could be paid off within several years due to the system’s state-of-the-art efficiency. And given the importance of reducing emissions, that initial capital expense may be easy to justify, especially if new fees are attached to the carbon dioxide emitted by fossil fuels.

“If we’re going to cut down on carbon dioxide emissions in the near term, the only way to realistically do that is to increase the efficiency of our fossil fuel plants,” she says.

“The exploration of unconventional hybrid cycles” undertaken by Ong and Ghoniem “represents the future of clean energy production in this country,” says David Tucker, a research scientist at the U.S. Department of Energy’s National Energy Technology Laboratory in West Virginia, who was not involved in this research. “Many technologies that may seem unfeasible at first glance hold the greatest promise as solutions to difficult problems. The first step is always to evaluate the potential of these cycles,” as the MIT team has done, he says.