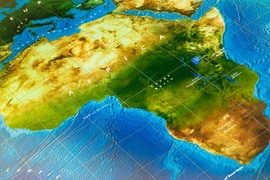 Caption:
“Today’s African Repats,” held on Feb. 4, 2016, was part of the Starr Forum series of events on global matters hosted by MIT’s Center for International Studies.

Students come to MIT from across Africa, totaling about 3 percent of the Institute’s population. Some of them stay in the U.S. after graduation, but many return to Africa, often as entrepreneurs. What is life like for these “repats,” who seek to build businesses as they reacquaint themselves with their home countries?

That was the subject of a public forum at MIT on Thursday, as a group of entrepreneurs gathered to discuss their motivations and experiences — from the idealism of trying to help their homelands, to the subtleties of fitting back into African society.

For some entrepreneurs, the decision to return to Africa was simple; others surprised even themselves by leaving the U.S.

“I wanted to use [MIT] as a stepping-stone to go back to Africa,” said Claude Grunitzky, founder of the cultural publication TRACE, as well as the TRACE TV network. Grunitzky, a native of Togo, is a former MIT Sloan Fellow, and moderated the event.

By contrast, “To the surprise of my family, I went back to Nigeria,” said Gbemi Munis, a current MIT Sloan Fellow pursuing an MBA. She worked in Nigeria as a senior systems engineer for Cisco.

“For me, going back to Africa is really about making an impact first,” added Joelle Itoua-Owona, a Cameroon native who has worked in finance and is currently president of the Africa Business Club at MIT Sloan.

The discussion, “Today’s African Repats,” was part of the Starr Forum series of events on global matters hosted by MIT’s Center for International Studies.

Whatever brings entrepreneurs back to Africa, plenty of challenges arise once they are there, from re-acclimating after time away, to breaking down gender stereotypes in business. And there often remains the hard work of building business networks, communities, and innovation ecosystems.

On the gender front, as Munis described it, as a female executive, she often has had the impression that people are surprised by her individual success and are “looking behind me to see, ‘Where’s the man supporting you?’”

Devon Maylie, a former Johannesburg-based reporter for The Wall Street Journal who is now pursuing a degree at the Harvard Kennedy School, observed that there are “a lot of preconceptions” about women, but added that “there is a lot of work to be done on both sides,” among both foreigners in Africa as well as Africans, to chip away those stereotypes.

“I think writing is an important way to do some of that,” Maylie said, referring to her journalistic work.

Jacques Jonathan Nyemb, a lawyer and policy advisor currently at the Harvard Kennedy School, suggested the most vital structural concern for entrepreneurs in Africa today was building the kinds of connected resources, linking human and financial capital, that help start-ups get off the ground in the U.S.

“People have a lot of ideas, but the most difficult thing is to move on a project,” Nyemb said. “I think it’s all about creating the ecosystem and trying to connect [people and resources] together.”

To that end, Munis added, “Building relationships is key. Within the Nigerian culture, they want to know you, so they can trust you. It’s part of doing business.”

During a question-and-answer session at the end of the forum, audience members suggested that corruption and nondemocratic governments put a serious damper on Africa’s business climate. The panelists, though, contended that it is hard to generalize about such matters on a continent-wide basis.

“Corruption is a world-wide issue,” said Nyemb, who has worked on drafting laws and creating enforcement mechanisms for some African countries. “What is really important is training — training of magistrates, authorities, … [to] try to see how they can be the guardians of the rules.”

The upside of doing business in Africa now, as multiple panelists pointed out, is that it is a region with growth potential. While Nigeria has long been an oil-exporting powerhouse, Munis asserted that the current moment “is a great opportunity for us to get involved in sectors that have been neglected because of oil … now is the time.”

And Grunitzky, for his part, observed, “The single biggest attraction is demographic. … Africa is the youngest continent [by population age]. My biggest hope is the youth of Africa. I think they are going to create some incredible things.”